Whenever my job as a corporate pilot takes me on the road for extended periods I try to dig up interesting stuff to do to keep myself busy.  I’ve had some pretty cool experiences including an awesome trail race in Mt Tremblant, hiking in the mountains around Lake Tahoe, and mountain biking around Lago di Garda in Italy.  So yeah, its a tough job I have, but someone’s got to do it I guess!  Anyways when a week long trip popped up to Florida’s gulf coast I immediately started looking for a 10k or other similar race in the area.  I didn’t find any road races, but I did stumble across a triathlon in Sebring FL.  I looked it up and it was only about 80 miles from where I was staying.  It was a little short, only a 1/4 mile swim, 14 mile bike, and 3.1 mile run, but I checked out the website and was intrigued…not only by the free hat, towel, shirt, free pre-race and post-race meals, but also by a guest appearance by Sydney silver medalist and 2006 Ironman world champion Michellie Jones!  Previous year’s guest speakers have been Dave Scott, and Mark Allen.  All at a little sprint race in a town I’ve never even heard of.

The 7:30 am start was early enough to make finding a nearby hotel a requirement, but it was definitely preferable to starting later as the summer Florida temperatures reach mid 90s by about 10 am and the humidity is a killer as well.  After dropping my stuff at the hotel I went over to the race site to register and check out the swim course.  I planned to swim 3 or 4 laps of the approximately 400m course but after one lap I wanted to throw up.  I have been in hot tubs cooler than that water.  Apparently 90% of the lake is less than eight feet deep, so you can imagine what happens to the water in the summer heat of Florida.  The worst part was with every stroke you could feel nice cool water just at your fingertips!  I headed back to the hotel hoping the water would be a little cooler in the morning.

Arrived early on race morning and did the usual routine.  Got to chat with Michellie briefly in transition.  Somehow I still managed to be late into the water even without having a wetsuit to put on.  It was the first non-wetsuit swim I’ve done, so I figured I’d be a little slower in the water than usual, but with a couple of 5:50 400m sets in the pool I was still hoping to pull off a split in the neighborhood of 6:15.  The gun went off for my wave 4 minutes behind the elites and under 30 crowd and we were off.  A couple of dolphin dives got me into deep enough water to start swimming and I went out hard for the first 50m to try and get some room.  By the first turn I had some space, and my tracking was far better than the terrible swim I had in Milton a few weeks previous.  The second turn back towards shore put everyone right into the rising sun and sighting was next to impossible.  I basically just followed the splashes of the swimmers in front and hoped they could see better than I could.  It seemed to work and I was soon running through the shallow waters and up the long sandy incline to transition.  Swim split 7:25…ouch.  But I think the course was a little long as the best swim was a 6:06, which is slow for 400m and several of the elites went over 7 minutes.  34/440 overall out of the water, with the 3rd best swim in my age group.

I used the long uphill run to transition to pass 3 or 4 people and had a fast transition.  The bike course was one 14 mile loop with a couple bumps that hardly qualified as climbs.   The winds were dead calm making it the best suited course for nice deep profile  aero wheels I have ever seen….unfortunately I don’t own any!  Maybe I’ll have to run that by the ‘accounting department.’  I felt good on the bike, losing only one place right at the beginning while I was once again fumbling to get my feet into my shoes, but I was able to catch and pass him before the end.  I hammered with the garmin average just under 39 km/h which is fast for me.  The strong cyclists ate this course up with several averaging over 43 km/h.  Hopping off the bike with a split of 36:01 was good enough for only 27th overall, but moved me up to second in my age group as I headed out on the run.

The short swim and ride had left my legs feeling surprisingly fresh as I left transition.  A quick glance at the garmin showed a pace of 3:30…way too fast, but it was a short run where a gradual falling off of the pace probably wouldn’t matter so I decided to keep pushing and see how long I could ride it.  Passed quite a few people, but mostly women from the first wave.  Didn’t notice anyone from my age group.  With about a half mile to go I was gaining ground on a guy ahead, and I saw him glance over his shoulder at me and dial up the pace.  I wasn’t sure if he had gone out in my wave or not but stepped up my pace regardless.  By the turn into the finish I was right on his heels.  He left me no room on the inside so I attempted a pass to the outside which of course led to a sprint to the finish which I lost by half a step.  No worries, he started in the first wave so I had him by four minutes.  Once again my trusty Newtons helped me lay down a blistering 5k run split of 18:23 – a new PB and 3rd overall run of the day!

I had no idea where I was in my age group but was sure I had made top three.  When the results were finally posted I was thrilled to see myself first place in my age group, 7th overall…ahead of Michellie Jones no less!  Then I looked at the time and saw 1:00:11.  I knew that was wrong as I had seen 1:08:11 as I crossed the line and was sure the waves weren’t separated by 8 minutes.  So I figured they forgot to put in the 4 minute delay between the waves but as that applied to everyone in my age group equally my first place would hold up.  So I was a little surprised when I was called up for the 2nd place award.  No worries, guess there was another error somewhere.  In fact there was, when the results were posted the next day including the splits (which weren’t available at the awards ceremony) the guy who beat me managed a 3:29 swim split.  Very impressive, and in fact a new world record for the 400m freestyle, and achieved in open water no less!  This error was eventually caught several days later (I assume he went out with the first wave) and I was again moved to first place in the 30-34 age group, 11/440 overall, and he was bumped back to 3rd in the age group, albeit with my trophy and Rudy Project duffle bag!

All in all it was a really fun race, and while I wouldn’t suggest flying to central Florida just to take part, if you were ever in the area definitely check it out!  And while the timing company dropped the ball on a few things, the race was very well organized especially considering it is basically put on by the town of Sebring chamber of commerce.  The awards ceremony was really inspiring as they honoured a team CAF (challenged athletes foundation) athlete Lin Dolen who suffers from cerebral palsy and completed the triathlon after collapsing from exhaustion and spending three days in intensive care attempting the same race last year.  The also honoured a gentleman whose completion of the event marked his 500th triathlon.  It was my 5th.  Clearly I have my work cut out for me.  And while I did get ‘chicked’ for the first time this year, it wasn’t too hard to take as it was by Michellie Jones.  And really, how often do you mistakenly get handed the second place award for a race you actually won by an olympic silver medalist and Ironman world champion? 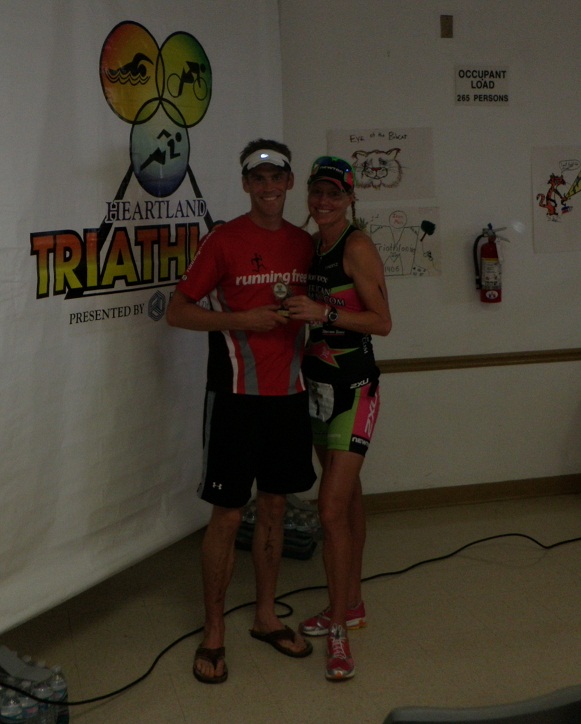 View all posts by Brandon Habermehl →