Headed out to Ganaraska Forest for the 15th on September 18th. This year after my knees deciding to go on strike during the 60k only did the 30k.

Going into this my goals where really to simply ride it, I lost 2 weeks of training as my lower back did it’s annual go on strike. So wasn’t able to do as much as I wanted to before hand. So with no expectation headed out, the nice thing with the Dirty Enduro is those racing the 30k get a civilized 1pm start time. 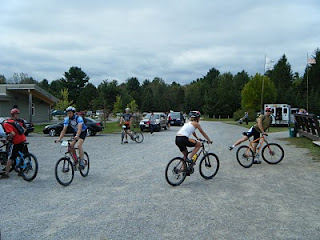 After getting the call up to the start and the usual reaction to nerves it was line up time. Only carried one bottle with some Eload mixed in. 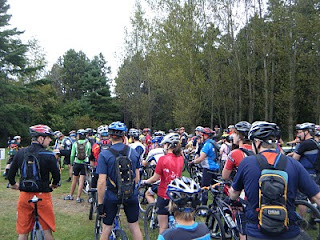 For about the first 3k we rolled along at an easy pace as everyone sorted out there place. Plus trying to avoid the usual first corner pile up as everyone over brakes.

At about the 3 k mark I upped my pace a bit. My plan at that point was to pass a bunch of riders before we hit the singletrack. Trying to avoid getting blocked. Once was in the singletrack the flow began. Felt good going through the singletrack. Even cleaned the section that I hade to dismount and run through the brush to get around a 5 rider pile up in 2009.

I should mention the weather was better then 2009, not a hot. and we missed out on any rain storms despite the dark clouds that seemed to be nearby. It seems that everyone at the Crank The Shield got the rain effect.

After a brief stop at the aid station that marked the half way point and refilled my water bottle. Headed back out to resume the last 15km. Back on the singletrack resumed then fun flow ride I was having. I did up the pace for the last half. About the 20k point had the fun of getting stung by a angry wasp. Someone had missed the line and stirred the nest when they went wide.

At about the 7k out point one of the volunteers called out 7k left. Pushed it a bit for the next few km’s. After some fun descents and technical sections suddenly was the left turn onto the grass. Followed by the sprint and sweeping right hander into the finish area. 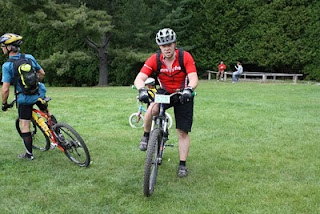 And that was it. Another Paul’s Dirty Enduro done and in the books. Goal was met that being to simply have a good ride and have fun. The Mistress held up and so did my knees. Now it was time for some Chili and hang out into the evening with the Don Rats.

Already starting plans for 2011. Looking at being able to ride it sans pack next year. But more on that plan later.