And the first event chosen for 2011 was the Tour du Butter Tart. Planned by the same crew that brought us the Dundas Monstercross ride last fall.

The overlord of financing met with the Sith of Training to decide that attendance was mandatory in the 2011 training scheme. Specifically as thie little ride met the most important and overriding concern for 2011… that it was free. So on the morning of March 2oth with Ham Breakfast sandwich and large ice Capp it was the drive from Scarborough to Dundas. And the specific location of Cafe Domestique a coffee house worthy of it’s own entry in the future.

Even though the meeting time was 10am like any social ride it’s not written in stone. Everyone had their shiny modern road or CX bike with the luddite black beast being the oddball. And after intorductions, getting geared up, and the usuall waiting it was off.

For me this would be my first road bike ride in about 5 and a half years. The last being when I cracked the RM Rail’s chainstay. So the bike was matched to my expectations.. that being a 100k spin. No chasing or road sign sprints. 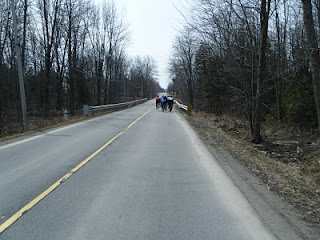 In the end I have no real idea of the route as it was Marc and Kim’s plan. For me it was the social aspect and using something to force myself out of the mental hole of lowered activity due to life of the last 3 years. And in the end this was a ride that was needed to push myself a little. It’s easy to maintain the lower ride levels when one is busy running the house, taking care of their daughter, and helping Joely so she can coach. It’s funny how when you are in the middle of it all you don’t really notice this.

It’s been 20 years since I last rode a road bike in the area near Dundas and the Niagara Escarpment. It’s funny how little it changes in the more rural areas. The roads are still the same, drivers the same, the smell the same, and the usual wind. The headwind this time was pretty mild. I recall some pretty heinous one’s I trained in while going to school there and no I don’t miss them.

In the first 30 minutes was the usual ride occurance of a bunch powering a head and miss the turn. Happens on every ride or run.. All part of the fun of group rides really. Then it was down to riding at your pace to each of the pit stops on the route. The first was pretty uneventful. It was the second that provided the amusement with the owners wife fuming about no $20’s. Hmmm… funny how one complains yet you have 25 plus riders ready to spend money. And the 3rd stop had the best of all….chocolate chip, skor, peanut butter, and other variations of butter tarts.

Shortly after leaving the 3rd stop nearly T Boned some farmers big hairy dog. Yep for the first time in 38 years of riding I almost T Boned a dog. Tom got to see that bit of fun as he caught me and went a head. And then it was back to the last bit which included a section from the Good Friday Road race which reminded me that I have to stop riding with road gearing and go with a cyclocross set up. Way easier on my ski racers knees. After a while it was the last stop which we all said just go as all where butter tarted out. Shortly after leaving there it was the Sydenham Rd descent. Fun though a little uncomfortable with a stem and bar to low. More on that later.

And then it was all said and done. The good bye’s and all went there seperate ways after 5 plus hours of riding. For me it was the drive to Burlingto to play a little on some urban stuff with Mistress and coffee while I emailed Joely to let her know I was still breathing and not lying in a ditch having a nap.