On Sunday August 7th was the Big dirty Pickering Ride organized by Nick. Another free event put on by buddies for buddies. All bikes and all pedals where accepted. After gathering at Nick’s in Pickering and the usual taking forever to get organized it was off for the ride. Especially when one considers that this is an informal event.

Unlike the last ride I chose the more DH oriented wheelset option. Gotta make it even harder.

Nick led us out into the side streets that led to the trail. The route as the previous rides started took us through a local park with the usual rock to play on. Since Tim chickened out I had to nail it and it was cleaned. And then it was the trails of the Duffins Creek Valley. After a good climb it was the exit at the tracks. 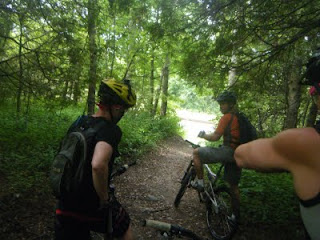 Then it was the rail trail .. well unofficial as they where abondoned and unmaintained other then locals using it. Lots of sweepers and such to deal with. At one point a bit of fun was added as Tim tried to do a Lee style race pass but he discovered that I know how to block very well. Elbows out and full body.. there are benefits at times to having been a ski racer. Later in the ride was reminded that I do need to get a dropper type seatpost. Will make riding a little smoother. 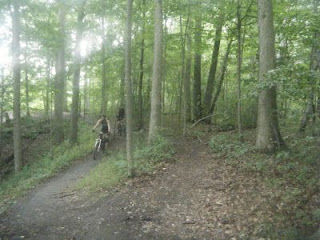 Nick took us into a section of Rouge trails I hadn’t seen yet. Or I mean when I first looked in 2002 there wasn’t much there really. Now there is a trail. Though I suspect it’s from the local residents walking there more then anything else. But it’s good to know there is something else to ride.

Then as we have barely begun the climb of Ben Trash….. thunder and rain. The full drench. And of course the wait for the made the wrong turn on the climb crowd. All the while listening to Tim whine about his tires having nothing for tread. That’s what happens when you become a weight weenie apparentely. 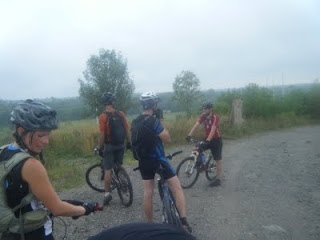 After descending and then a log scramble it was the ride back to Nick’s. Pretty much the same rail trals back with a wee bit of mud puddle thrown in. Of course having to stop to try and ride Nick’s little downhill line. Not as easy this time with there being a thin layer of slick mud. 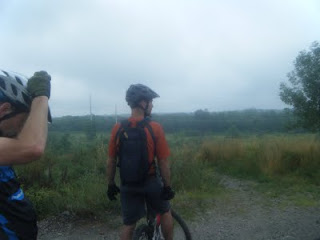 After a bit more trail and cutting back through the park at the beginning we where back at Nick’s. Upon which it rained some more though Nick had erected the large tent in anticipation of this. And it was BBQ time.
All in all a good ride. Riding flat pedals with the DH wheel set up wasn’t a big issue. Though a dropper style seatpost with remote would have been a benefit.