Going into this race, I had hope of breaking 30 minutes for the 8K if conditions were good. Well, race morning arrived and conditions were far from good. I solid dumping of snow, cold conditions and a stiff wind out of the north put all hopes of going sub 30 out the window.

As in previous years, I was entered in the 8K again, as part of a corporate team for work. 8 miles is still too far for others in my office to tackle, so we stick with the 8K race.

I picked up a colleague of mine who also lives in New Hamburg, and we were off to RIM park, where the event is held. Once there, we grabbed our gear, found a table and got ready to race. About 10 minutes before the 10am race start, we headed outside to find our spots.

After a quick singing of the national anthem, the race kicked off. Here’s a few shots at the start to give you an idea of the conditions. 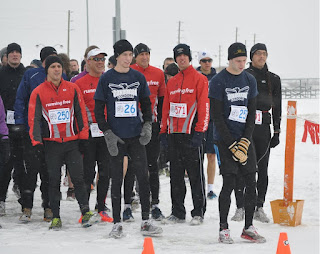 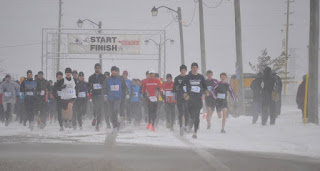 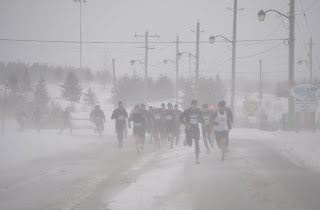 The race started off heading south, so we got the benefit of the tailwind at the beginning. The roads were really slushy, but for the most part we were all able to find some sort of tire tracks to run in. Because I thought the roads were going to be snowy, I decided to wear my Saucony Peregrine’s. They’re built on a similar base as the Kinvara’s, but have a beefy trail type tread to them. So although they aren’t the lightest shoe around, they aren’t too bad. As it turns out, I likely could have got by wearing my Fastwitchs, which certainly would halped with the splits. 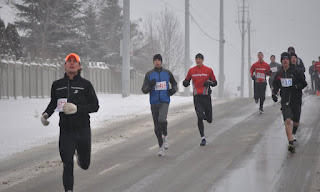 The first few K were in the 3:40 pace, as we headed down wind and for the most part flat/downhill to Lexington. Once we hit the 2K mark, I was likely running in about 9th place overall between both the 8K and 8M runners.

As we climbed the hill at Lexington and started making the slight turn back to University, I picked off two more runners to move into 7th place between both races.

Once on Bridge, and running north back into the wind, the level of difficulty picked up substantially. At this point, I picked off one more runner and I didn’t know it at the time, but the two race leaders of the 8M were just in front of me. As we turned right onto Lexington, they were only 10 or 15 meters in front of me. I picked up the pace a bit and joined up with them, as we crested the hill and made the run back down to University. 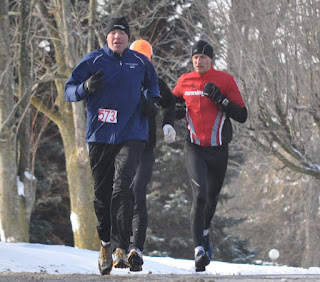 I was a bit disappointed to see them go to the right, when I had to go left, as that left me totally alone to face the uphill run on University into a very strong headwind. By far, the hardest kilometer of the race was 7 as I continued to “try” and hold a strong pace while going uphill into the wind.

As I turned onto University, I noticed that the next runner in front of me was likely about 200m or so up the road. I did what I could over the next 2K to try and gain some ground, and I got him to within about 15m, but I was really feeling depleted at the end, and just couldn’t catch him. It turns out, he was a runner from Baden, so I’ll likely get the chance to redeem myself at the Hamburger Hill 7M road race in May here in New Hamburg. I believe he won the Wilmot Township division last year.

Here’s the link to the race results:

Here’s the Garmin data of the race. I don’t think I had the satelites locked in when the race started, so the first K is a little long and the pace a bit faster than it really was.

So with this race being the first of 2012, I guess I’m off to an alright start. I hope it can continue into the spring and some of the early season tri results.