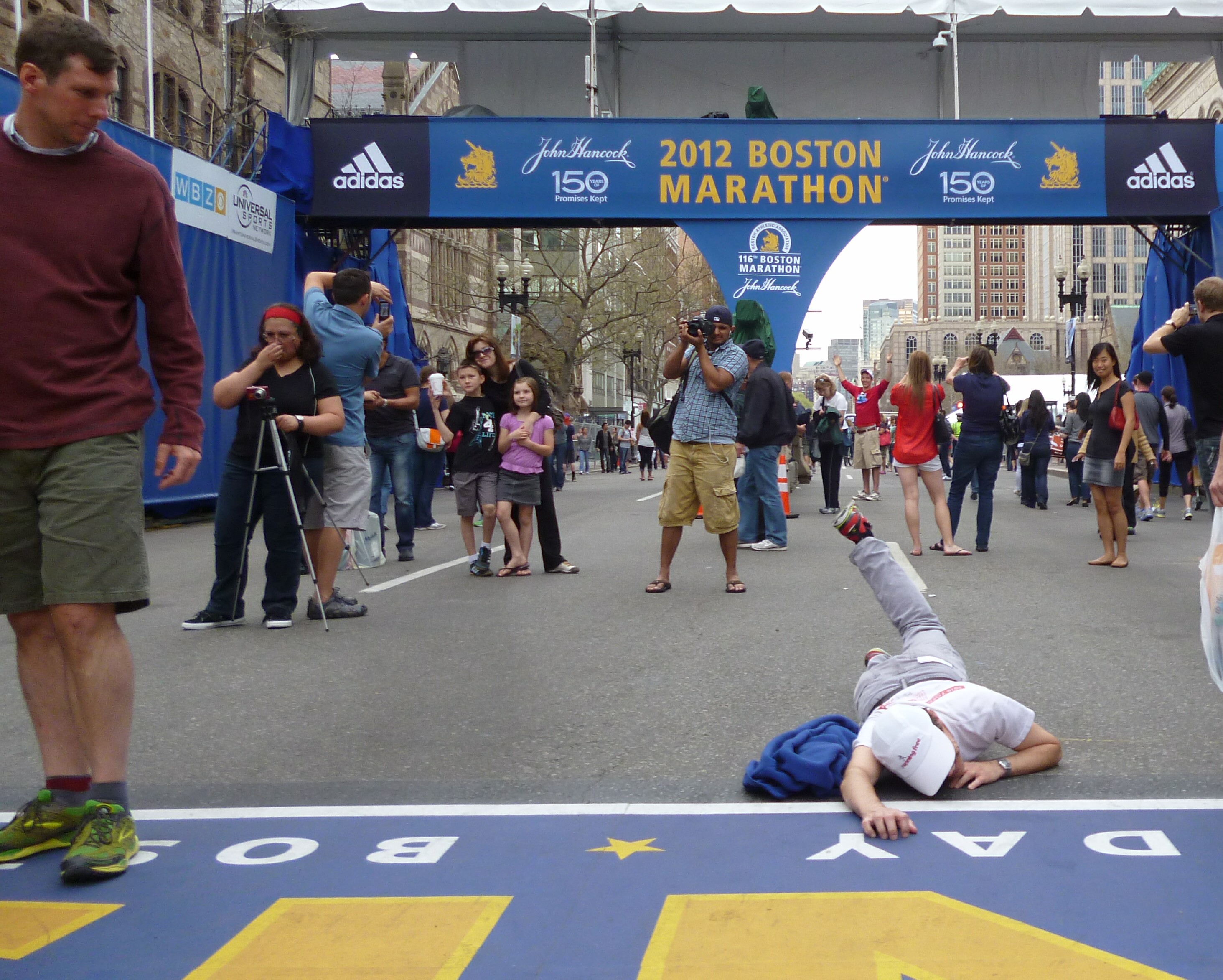 Cruel. Inhumane. Unfit for Masochists. Stealer of dreams. This was some fresh kind of hell, all courtesy of the 116th Boston Marathon.

The spectre of Boston has haunted my marathon races, starting with my very first and very poorly planned marathon attempt back in 2004. It was also a hot day that year at Scotia, but I still managed a 3:21:54, missing my ticket to Boston by less than a minute. Whether I WANTED to go to Boston back then did not matter; missing that BQ hurt just the same. That result at Scotia 2004 would stand for years as my worst ever marathon race time, and my worst ever marathon memory.

Of course this year’s Boston would change that. I find this simply hard to swallow: 3:23:56 was ALL I HAD.

I had promised myself not to dream about Boston until I had at least run a sub 3 marathon, and then (was I getting greedy here?) not until I could go sub 3 at Boston itself. I wanted to see my name in print on the first page of IRun’s “Canadians in Boston” spread, and better the first column of the first page. So running sub 3 at Boston was a given. It was simply a question of how much faster I would be. Boston apparently already knew of my dreams, and would send me nightmares instead.

All entrants are ranked by their qualifying time. The lower your bib number, the faster you are. I showed up at the expo to pick up my bib, number 1128. Yes, I had a decent BQ time of 2:50:50. The boxes containing the bibs lined the wall from one end of the expo to the other. My number was three boxes in, and hundreds spanned the floor. The context of my BQ time was starting to sink in. I was around the top 4% of Boston runners this year. I would be lining up with like individuals. This was going to be a an experience to be remembered. And how.

79 F in the shade at the start, and almost 90 F in the shade by the time I finished. Problem No.1: there was almost no shade, except at the right side of the road in some places. In the blazing sun, it felt 5 or 10 degrees warmer. Problem No. 2: My right ankle was mildly inflamed and I had to run on the left side of the road to keep it in check; full sunshine it would be, the whole way.

Last summer I did all my long runs preparing for the Endurrun Marathon 2011 in mid-day heat. Endurrun race day was in August and I expected hot. The Endurrun course would have plenty of hills and I ensured my training routes had the same. Sounds a lot like Boston 2012? Looking back, my logs indicated I ran a 42.2k long run, mid-day July heat, hilly as hell, in 3:20:00 within easy heart rate (less than 140 bpm). Had that easy training run bettered this year’s Boston? No way. Boston was just that much harder. Yet I know the heat and the hills so well, just not Boston’s version. Though I remain somewhat confounded with my Boston result, it just comes down to this: What was I thinking?

Jeff Fyfe (bib 1100) and I lined up at the start line. Our original plan was to hold 4:00/k until the half and then make our moves. With the heat, we cut that check point back to 10k. Why we didn’t cut our pace then and there is beyond me. What a mistake. By 5k, my heart rate was 159 BPM, and that was not good. My marathon target HR is 151. I said good-bye to Jeff and cut back to 4:15/k. I could still catch a sub-3h if I was careful. Yes, another big mistake. By 10k my HR was back up and I cut back again to 4:20/k, then 4:30/k, then 4:45/k by the half marker. The damage was done and irreversible. Although a 93 minute half was in the books, I was completely knackered and the worst of the Newton hills was still ahead. My sub-3 dream was not just already over (and over-done), it had been fried to a crisp on the hot tarmac. I had melted quickly and those early hills – the ones I knew I had to be so careful with – they got the better of me just the same.

Only halfway done and I wanted to go home. Now. My wife and car ride out of town were waiting at the finish half a marathon away. There was no point calling this a race any more. It was now just another training run. Onward I “jogged” keeping my HR reasonable, whatever pace that might be. Walked a couple times. The second time I walked, I realized I could not stop again or I would be walking right into the finish. I wanted this over as soon as possible. It would be over sooner if I kept jogging. Every person with a hose or sprinkler was my friend. Cup after cup of fluid went down the hatch. No water stop was missed.

Until this race, I had never, ever dumped water onto my head. People were taking ice and storing it under their caps where it melted over their craniums. I had worn my retro sweat band to let the heat escape. I was envious.

At this point a word of thanks to my Dad. He wrote me a quick email before I left, wishing me to run well, enjoy myself, and most importantly JUST FINISH. Ominous advice I thought I would never need. However those last two words hung in my head. JUST FINISH. I kept my feet moving, and with that came an opportunity to wrestle something back from this nasty Boston, the stealer of my dreams.

So many people were passing me. Cute chicks in tight yoga shorts. Great incentive to keep pace. Bib numbers 3000, 4000, 5000… I was confounded how they were managing to be both in better physical shape and better tempered for this heat. I would finish 2249. Some 1121 people with slower BQ times had the better of me. It would appear some just shrugged off the heat and added 5 or 10 minutes to their goal time, while others simply melted away including my running pal Jeff and me. Some Canadians (who I assume trained in cold this winter) actually finished over 5000 places better than their bib number! I am fascinated by how they did this, especially at Boston. What was their secret? We were all running the same race in the same conditions. Why had my training fallen so short compared to theirs?

One answer is yoga. Hot yoga. Confirmed by top Canadian finisher Matt Leduc, who hits the Schwitz at least once a week. I am sure Stockwell Day does it too. How else do you explain his placing almost 10,000 better than his bib number? That is a bold accomplishment, even for a politician! Hot sweaty chicks in yoga shorts? Hmmm. What exactly was his motivation?

It is said that Boston is not kind to strangers. You can read all you want about it, and listen carefully to your running pals. Head this advice, and it still won’t be enough. Until you have run Boston, in these conditions, you just won’t get it. And now I get it. I had previously written an article called Predicting Your Boston Time, where I compared a few tune-up race results to Boston results. From this there are things to be learned, mainly from my mistakes. My biggest mistake was thinking I had any chance of repeating my BQ time from Hamilton:

** imagine having to pick up a big rock and carry it with you the whole race. That is Boston, if you chose to race the first 10k. It is much less painful if you only have to carry that rock the last 10k. Only the downhills after heartbreak can be raced. Hamilton’s Red Hill also gets your quads, but the finish line is near by the time its consequences arrive in your legs.

Boston had taken everything I had to give, and more. I have never been so sore or beaten up, from such a slow run. A huge sacrifice exchanged for a mediocre result. But I’ll let Boston hold on to it for now. I will return, and take it back, with interest. When I am wiser and better trained.

Until then, I take from Boston a small keepsake. At 23 miles and just under 3 hours, I realized there was still a chance to redeem myself. So I dropped the hammer and managed to get my pace down to 5:00/k. By 24 miles I was almost incoherent and dry as toast, according to Todd McCall who ran a bit beside me. And my thanks, Todd, for slinging some fluids at me. The last 600 m along Boylston was a full out “sprint” of 4:30/k pace, heart rate screaming to 172 BPM (my max). A BQ at Boston was mine, and as this year’s iRun magazine would change its format, my name on the first page of “Canadians at Boston”.

I had crossed the finish line, and managed to remain standing. Many did not. But my legs could move no more. My hotel was 2k walk away. The longest walk of my life. 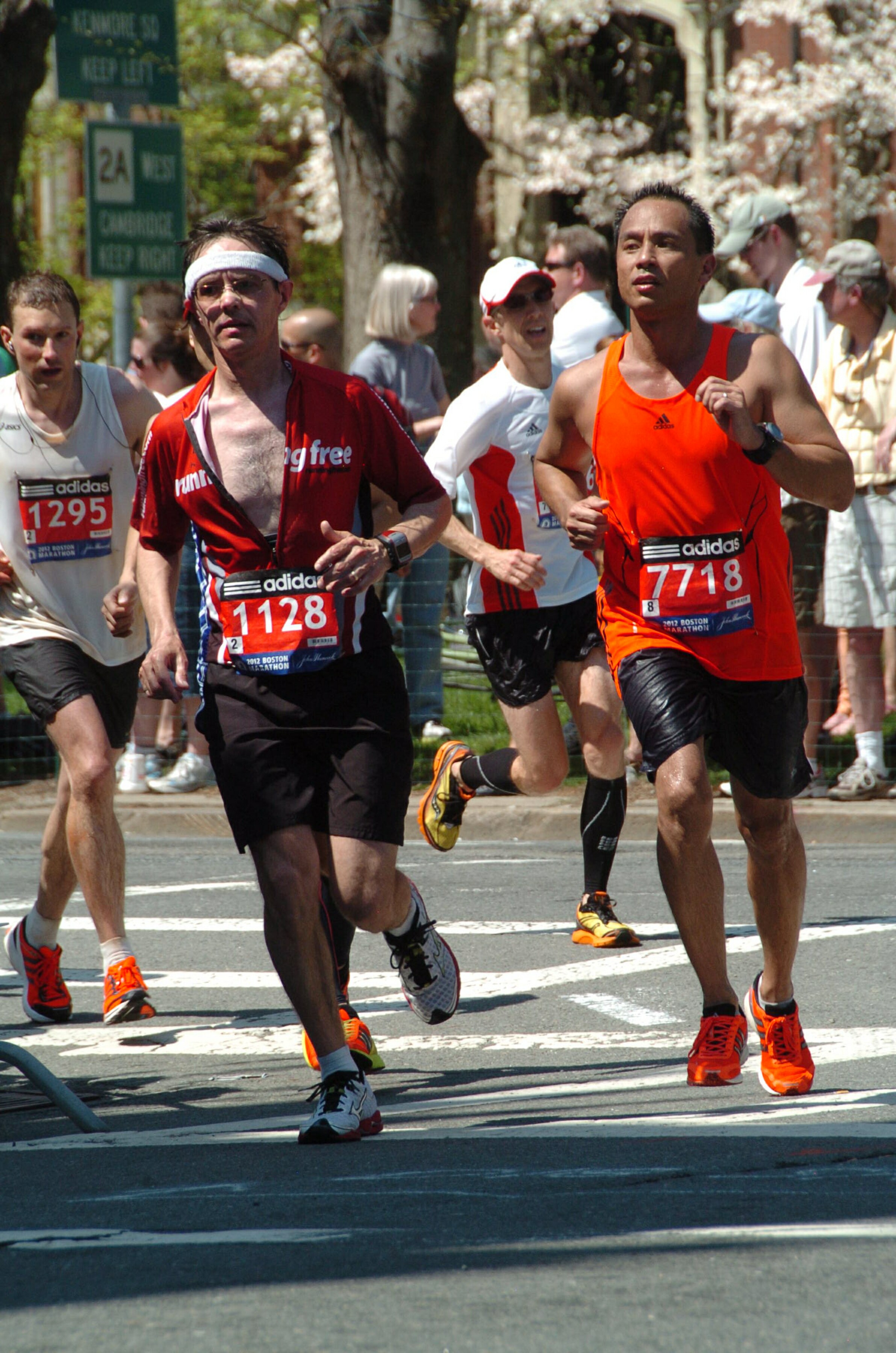 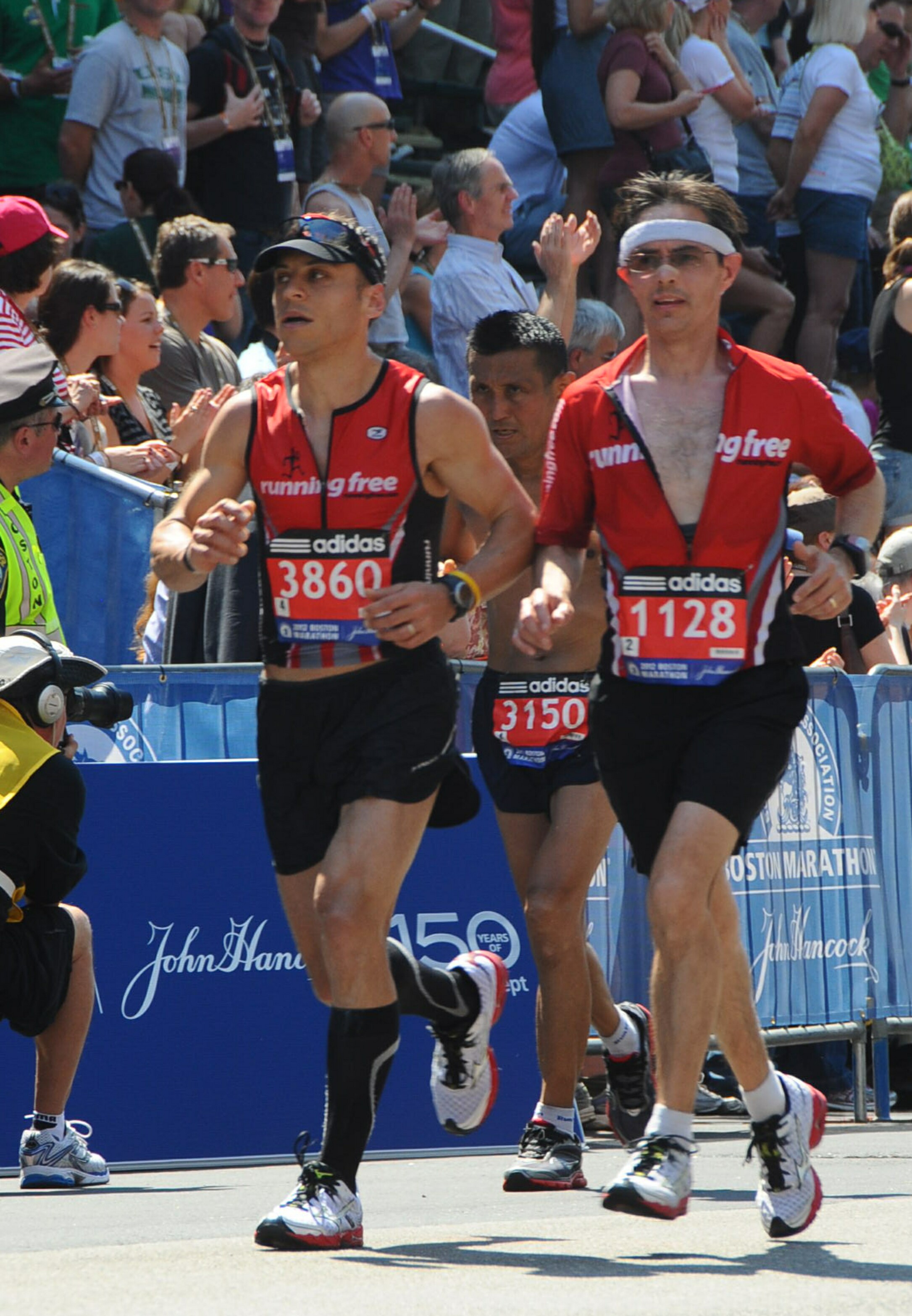