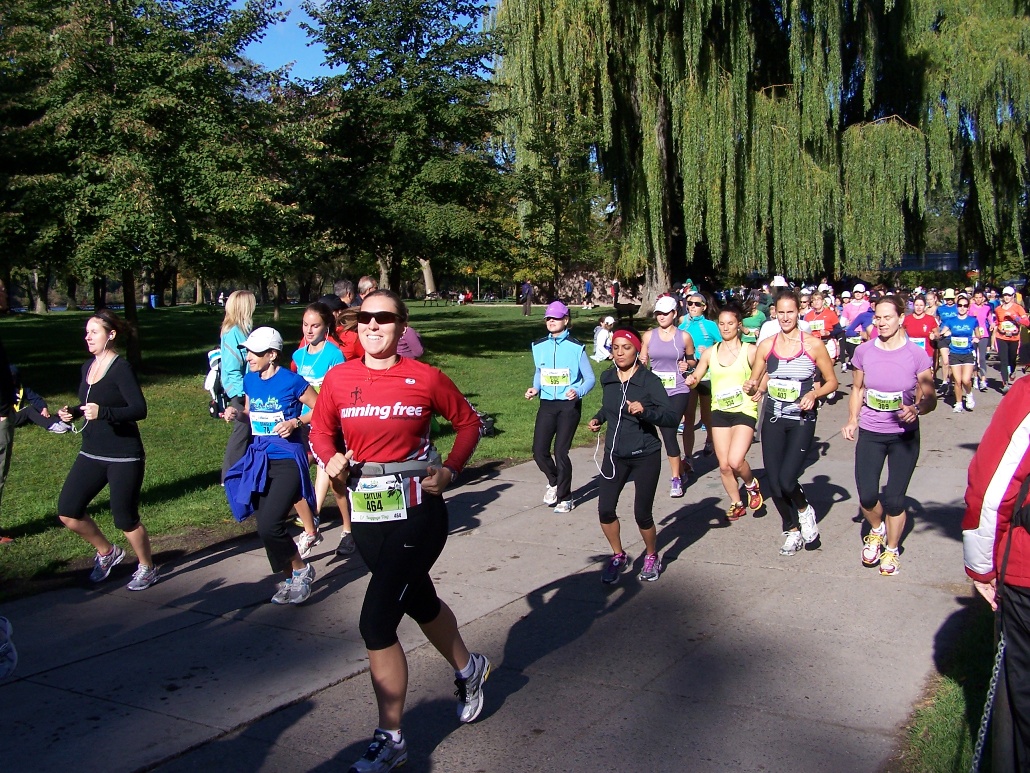 This past weekend I had the pleasure of running the Island Girl 1/2 Marathon. This race is a women-only run on Centre Island in Toronto. The race is really fun and most women wear leis, grass skirts and fun, bright colours. I signed up for this race because it was close (ish) to home, I had never done a women’s-only race before, and I liked the sound of running in a secluded area away from traffic.

Overall I found the race was well organized. I chose to spend the night in Toronto because the website cautioned against picking up your kit on race day. The hours to pick up the kit weren’t as great as I thought (it closed at 2pm Saturday and there was a huge line-up of ladies at 1:30) and there were only 2 staff there to assist with kit pick-up. While there was a lot of parking nearby (at Toronto’s typical high prices) I thought that a map of places to park on the website would have been helpful for us ‘out-of-towners’. I was also surprised that there were no vendors or race expo on site. This was not the race director’s fault, this was not advertised, rather I was just so used to this being a staple at other races that I assumed there would be the same thing at this race.

Race morning was fun and different because all racers and spectators took the ferry to the island. I chose to take the early ferry as I was worried it would be packed and I didn’t’ want to miss the start. Turns out this race is much smaller and I didn’t need to worry about not making it over on time.  The vibe on ‘the island’ was great. There were Hawaii-inspired beach decorations everywhere and a steel calypso band playing at the finish. On the course there were Hawaiian dancers and there were a few music stations blasting island dance music.

The race was two loops of the entire island. Although I usually despise races with multiple loops, the scenery on the island was great. The course also enabled spectators to see their loved-ones more often and give the much-needed cheering and inspiration. My favorite part of the course was the boardwalk on the far side of the island. Another part of the course that I enjoyed was that due to the nature of the course, you were able to see the other competitors most of the time and cheer each other on. There were lots of washrooms at the start and around the course (which is another ‘make or break it’ feature for me in races).

The only incline/decline on the course is the bridge at 100m/21k. You don’t notice it at the start, but you sure do notice it at the finish! While it’s hardly more than a hiccup on the course, it can feel like a mountain at the end. After you cross that bridge you are rewarded with more music, and you get to celebrate with a medal shaped like flip-flops.

If you want a flat, friendly, fun race, this one is for you!