I realize this race review is a little late in the season, but hopefully it helps you plan for next year and you will also chose to make Barrie a race destination City of choice!

This year I had the pleasure of running the Barrie 5km. I was originally supposed to run the half marathon, but due to an injury I was able to switch to the 5km. Kudos to race organizer Jeff Moyle for making this a pain-free process.

One of my greatest dislikes in racing is having to wake up super early and drive for hours to get to the start line. Since Barrie is fairly close to home I was able to avoid the early-morning torture routine and have a leisurely, relatively stress-free morning.

The race took place father’s day weekend. While this could be a nuisance for families who aren’t all athletic, it’s a great way to get out with the family and celebrate dad! Since the weather wasn’t great for spectators, I was able to meet up with my family for brunch at a local restaurant after the race (I left a puddle on the seat since it rained so hard… oops!).

The start of the race was delayed this year for some reason, which was a little frustrating considering athletes were waiting shivering in the rain. The sound system wasn’t connected right away so Jeff had to do announcing from the police cruiser megaphone which really didn’t cut it. Hopefully these things are ironed out for next year. Another suggestion would be more porta-potties at the start. This is something I believe you can never have enough of!

Volunteers were great and encouraging on the course. Always nice to have smiling faces helping you along the way!

This year’s race route was changed from last years, in my opinion, for the better. The start/end hill up Mulcaster was taken out for a start along the Barrie waterfront. The route was a bit confusing in spots where it switched from road to paved trail. Overall (for the 5km at least) I really enjoyed the route. Fairly flat, with views of Kempenfelt Bay the entire way. Beautiful! The race was small in numbers so people really didn’t get ‘lost in the crowd’.  One frustration I had was that the races started out with the ½ marathon, then 10k, then 5k. As I was running the 5k and due to the time delay all the races started fairly close together, so I found it was quite crowded on the way out.That being said nothing makes you feel fast like passing all the 1/2 marathoners!

Something really special about the race is how Jeff really makes every effort to make sure the maximum amount of money can go to support the local charities of choice, with the main one being the RVH Cancer Centre. It’s nice to be able to run locally and know that a significant part of your registration fee is actually going to support local organizations.

Fun fact: This year’s finisher medals were both a magnet AND a beer bottle opener. How neat is that?

Overall rating: Great scenery, good charities, fun race and good people. A great local race that I would recommend to all. 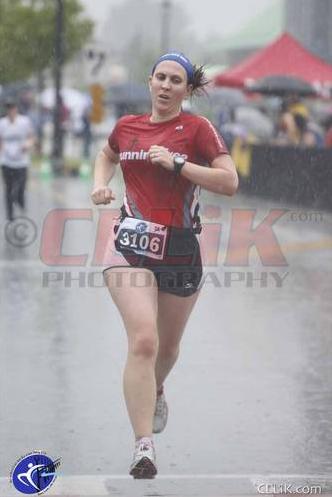