Going into this race, I wasn’t feeling quite as fast as I was last year.   With my goal race not until November, I hadn’t done a whole bunch of speed work.   As a result, if I could be reasonably close to last year’s time, I would have been pretty happy.   Really though, the main goal was to win the Wilmot Township division, given this was going to be the last year for this race being run locally.   Starting in 2014, Ted Seyler (local race director) is handing it over to Lloyd Schmidt of the Waterloo Running Series.

The conditions this year were not nearly as good as last year.   It was only hovering around 6 degrees with a cool, stiff wind out of the NW, which meant the 2nd leg of the out and back section was going to be tough!

The race got under way promptly at 9am with a blast from one of the local fire department trucks.

Right from the start, there were 4 of us running pretty close through the first kilometer, as we enjoyed a bit of a tailwind.   There was myself, Ken MacAlpine (who I considered the guy to beat), Greg Dyce and Peter Vandriel.

Eventually Ken and Greg began to distance themselves, once we started heading down the hill at Erb Transport, and I found myself running just behind Peter Vandriel.   Just as we made the turn onto Sandhills to   tackle “The Hill”, Peter pulled off to the side at an aid station and I made my way into 3rd position, which is basically where I stayed the rest of the race.

As I made my way up Sandhills, at a pace that felt a lot harder than last year, I pretty much knew I wasn’t going to match last year’s time.   I was already about 5 seconds per kilometer slower, and I hadn’t even dealt with the hard part yet.

Eventually I made it up and over the big hill and tried to push hard down to the turnaround point, which is pretty much at the lowest point on Sandhills before we had to turn around and retrace our steps all the way back to the Wilmot Rec Complex and the finish line.

As I made my way around the turn around cone, I was greeted with a nice stiff and cold NW wind, which slowed the pace down and certainly made things seem so much harder.   The next 1-2K back to the top of Sandhills was really tough going, as I tried to keep the pace up, but the uphill, cold headwind was really taking it out of me.

Eventually (and thankfully), I reached the top and got to enjoy the fast decent back to Gingrich road.   At this point, we were still dealing with a bit of a cross/headwind, so the climb back up the hill by Erb Transport was tough again, but this was pretty much the last of it.   Once we got to the top, we were at least sheltered from the wind by some trees until the last half K to the finish line.

Unlike in prior years, where I was being chased and had some people I could legitimately catch ahead of me, this year I found myself totally alone for 3/4 of this race.   So although I wasn’t taking it easy, I wasn’t forced to push myself just that little bit extra, which likely cost me a bit of time. 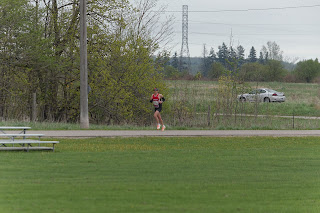 I eventually made my way back to the rec complex and around to the back of the arena, where we got to run inside to a finish line on the arena floor, which was cool.  They did this the first year, but haven’t done it since because of issues with the timing chips on your ankle (didn’t work well on concrete floors).   With the chips in the bibs this year, it meant we had a finish line much like the Around the Bay in Hamilton. 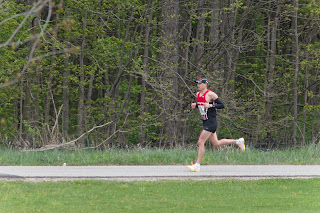 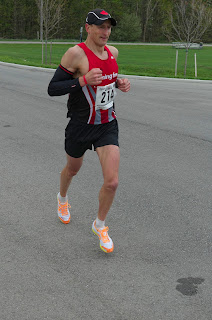 I crossed the line in 43:21, 3rd place overall and 1st place in the Wilmot Township division.   Last year my time was 41:39, so about a minute and a half slower.   I believe this is partly due to less speed work and partly due to the colder and windier conditions.

While I was off doing the 7 Mile race, my oldest son finished 4th overall in the 3K, which was another big improvement for him.   After my race, I did the 1K fun run with my youngest son Tate.   He pushed hard and had a great time as well.