This year, the Woodstock race was only a one day affair and the triathlon was only a sprint.  I generally do better the longer the race goes, so the short race wasn’t in my favour when compared to all the super fast young dudes who focus entirely on this type of distance.   Needless to say, I would treat this as a nice speed session and give it everything I had.

It’s crazy how much the weather has been fluctuating this spring.   Last Monday we did Victoria’s Duathlon, and on the second run, the temp was pretty much 30 degrees Celsius.  When I got up this morning just after 6am, this is what we were greeted to:

Needless to say, I was a bit concerned about getting on the bike after coming out of the water.   This made the the clothing decisions race morning much more difficult.

I arrived at Pittock Conservation area shortly before 8am and did all of the necessary pre race duties and then decided to just go for a short jog, rather than getting on the bike when it was still pretty chilly.   As we got closer to race time, I got my wetsuit on and went over to the lake to check out the water.   Surprisingly, when I put my feet in, it didn’t seem too bad (likely cause it was still fairly cold outside).   It was cold enough that the race organizers made the swim a wetsuit mandatory one, which might have put a few racers over to the duathlon.   I couldn’t imagine doing that race without a wetsuit though!

I did decent warm up to get the blood flowing and eventually made my way to the start as the first wave of athletes went off.   I was going off in wave 2 this morning.

From the sound of the horn, I put in a good effort to try to distance myself from some of the chaos and contact that we usually get at the beginning of the swim.   This worked well, as I pretty much had free and open water right from the get go.

As we headed out to the first turn buoy, I think I might have gone a bit further right than I wanted, but nothing too bad.   I made the first right turn with a few other guys and I tried to get a draft going, but one guy took off and the other fell back, so I was pretty much solo again.   I could tell however that someone was on my feet pretty much the whole way around the swim.   Good for him, but it would have been nice if he made an effort to come up and pass so I could do a little drafting too.   It’s a lot easier to draft in an Ironman when we all start at the same time.   With only 50 or 75 in my wave, this didn’t help my cause much.

After rounding the second buoy, I made a strong push back to land and when I finally stood up and checked my watch, I was happy to see around 11:30 or so on my watch.   That was well over a minute faster than last year, which is definitely good news! 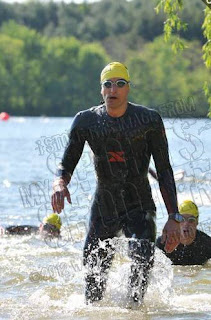 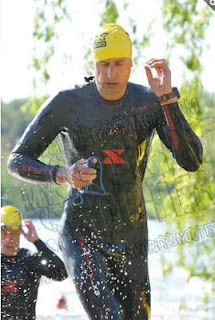 It was  a decent run to the transition zone where the timing mat was, so my official swim time was 12:03, but here is my Garmin file (not the most accurate with the distance though)!

T1 was by far the worst part of the race for me.   Some days I have no problem getting the wetsuit off and sometimes it just won’t come off my ankles.   Today was the latter unfortunately!   Once off, I then struggled to put arm warmers on and also gloves.   Things seem to get stuck when you are wet!   T1 was a terrible 1:34, about 45 seconds slower than I wanted, and the worst part about it, was that I couldn’t pull my arm warmers up my arms when I got on my bike, and would later find out that I really didn’t need them at all.

The run to the mount line in Woodstock is a bit tricky.   It’s uphill over bumpy grass and lot’s of posts that you have to navigate through.   I eventually made it to the mount line and got on my bike, but you immediately need to go around a tight turn and up a big hill.   Because of that, I didn’t end up getting into my cycling shoes until we were about 300m into the bike race.   Once I did though, I had a bit of a chip on my shoulder from my sub-par transition and started hammering past other racers.

The first 3K of the race is generally uphill, and at this point, my power was just over 300 watts, which is pretty much my FTP.    Once we crested the top of the first hill, I did let it come down a bit, as 300+ is not sustainable really.

I continued to pass lot’s of racers, as we faced a nice little headwind as we traveled up to the first turn on country road 33.   Once on #33, we were forced to deal with some bumpy road conditions, but at least it didn’t last too long.   After only a few K, we made a right hand turn and were on some smooth road conditions again, and had the benefit of a nice tail wind all the way down to the turn-around point.

After the turn, it was back into the headwind and a slight uphill all the way back to #33.   I continued to pass racers, but at this point, they were more spread out, so there was a lot more solo riding.   Not one person passed me though on the bike throughout the entire 20K ride.

We finally made it back to the park and I took a quick glance at my computer before we headed into the no pass zone.   I had held 297 watts until about the 19.7K mark of the ride.    After that, I lost a tonne of power  as I had to more or less coast down the hill and make the turn into the park and to the dismount line.   In the end, I averaged just over 37kph and around 282 watts, but this of course includes the long run on the bike from the transition zone to the mount line, where I had no power and not much speed.  Here is the garmin file for the ride:

T2 was quicker in only 44 seconds, as I got into my running shoes and headed out on the run course.   My only problem now was that my feet were pretty numb.   I thought that was strange, since they didn’t really feel cold on the bike. Needless to say, it felt like my insoles in my shoes were bunched up and the middle of my foot was all tingly. This made running feel very weird.  So much so, that I almost stopped to check if the insoles were out of place (in the end, I don’t think they were, and my feet were actually numb!).

The start of the run was a bit slow, as I battled the feeling in my feet and the gravel path that we had to run along for the first K.   As I got over the dam, I saw the lead guys coming back, and realized they were pretty far ahead of me, despite starting in the second wave.   It was also at this point that another racer passed me.   Given his speed, there was no way I was staying with him.

Just before the turn around, another racer passed me, but this time, I was able to hang with him a short bit until he eventually pulled away as well.

After making the turn and heading for home, I was feeling a bit better and picked up the pace a bit, running just under 4 minute K’s.   Finally, after passing the 4K mark, I pushed just a bit harder towards the finish line which I eventually crossed in a time of 1:08:02.  My final run was 20:37, but my GPS had the run at 5.2K, at a 3:58/km pace.   That was a little slower than last years run which was 7.5K, but not too bad though. 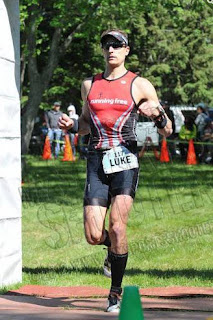 After finishing, I grabbed some chocolate milk and a hero burger (Man I love the post race sponsorship at these races!).    I chatted with some other folks for a bit and then decided to check results which were posted.   In the end, I did grab my M40-44 AG win and finished 19th overall.   As I said earlier, this series is attracting some fast young guys (and gals), so 19th overall isn’t too bad, given my key races this year are a couple of half Ironmans and then Ironman Arizona in November.

Here are the results: