There’s a new cat prowling the ranks of male masters racers. David Hiddleston has risen nearly to the top, taking third overall master in a time of 1:49:47. Paul Kemp, Larry Warriner, Troy Cox, Kyle Aitken, Nelson Ndereva, Charles Bedley, Anthony Davey, Roger Moss and company. So many strong runners. Yet we are looking up the results list and asking how did Hiddleston get so good so quickly? And at ATB, where the last 10k chews up even the best of competitors and spits them out?

I look toward my own training experience for an answer. Last year I discovered Coach Jack Daniels’ Running Formula. I am again using his marathon A plan, this time to train for Boston. It includes lots of easy mileage reinforced with very specific workouts designed to prepare the runner for effort at distance. For example, imagine doing 4 x 1 mile repeats, followed by 10 miles easy, followed by another set of 4 x 1 mile repeats. You get the idea: those last 4 x 1 miles are brutal.

It is said that deliberate practice is what the top performers are doing, and the rest are not. As such, I have been doing my training sessions over terrain very much like Boston and the last 10k at ATB. So whatever deliberate practice Hiddleston has worked into his training regimen, it must be way tougher than what I have done. I would love to learn more.

On race day I woke up feeling absolutely awful. I was dizzy and weak, alternating chills and sweat. This race was a no-go. Somehow with gentle persuasion from my wife, I resolved to complete the race as an easy training run. I arrived to the start area, not even entered into the corral when the race began. My head swam for the first few km’s and then everything started to wash away. Soon in better spirits, and met by Running Free’s John Gardener, I got a mind to catch up to the 2h pace bunny and go for a gold medal. First 10k done in 39:26 (39:46 gun time).

I soon spotted some black shirts. I thought to catch up, and after a 3:44 split managed to join a group of Black Lungs runners. I planned to hold on until 20k, where I knew the hills of the North Shore would take me out. I suck at hills.

Around 18k one of my most inspirational competitors appeared ahead of us: Anthony Davey. I left the group to catch him. I hoped to cross the 20k timing mat with him and expected to fade after because, well, I suck at hills. Second 10k done in 38:16, on marathon goal pace, yet somehow my legs were feeling great.

It sounded like Anthony had some work to do, yet I felt like I was on a romp. I looked ahead and thought: fishing trip! Each runner I laid eyes upon slowly advanced toward me. I screamed down the valley and up the other side of the dreaded Valley Inn Road hill. This should have spelled the end of me, but my legs demanded more.

A surprise end for a race I almost didn’t run. If you are ever in doubt on race day, get your sorry butt down to the start line. You just never know what you have inside you, and you never will, unless you cross that line. Good advice not just for racing, but for life in general.

And after the finish, I was reminded that not everyone is interested in your result, no matter how happy you are feeling about it. Stay classy and keep it to yourself unless asked. As competitive as I may appear to be, it is not to beat others; rather I race to achieve the best that I can, whatever that may be.

Good luck to all at Boston!

Now for my better half…

I cannot really say I woke up on race morning, because to me it felt like I never slept. I did however watch my wife sleep soundly through the night. She awoke in great spirits, ready for her 5k. She then spent the next half hour convincing me to get out of bed and down to the start line. Honey, thanks for that! There is no way I would have started without you.

The previous weekend, we stopped into Hamilton and ran the 5k route together. She was determined to do better than her first 5k race at Chilly, despite some minor setbacks that forced some time off from running. I never expected to be pre-running a race course with her! This is just a wonderful adventure. I am loving it.

So, yes, another PB. Close to a minute off her previous just four weeks ago. That is huge for a 5k, yet she admitted she kind of coasted through the last 2k. Her Garmin confirms such.

So some speed work is in order. The local tracks are finally clear of snow. We can get onto some repeats and trim that 5k time down even further. 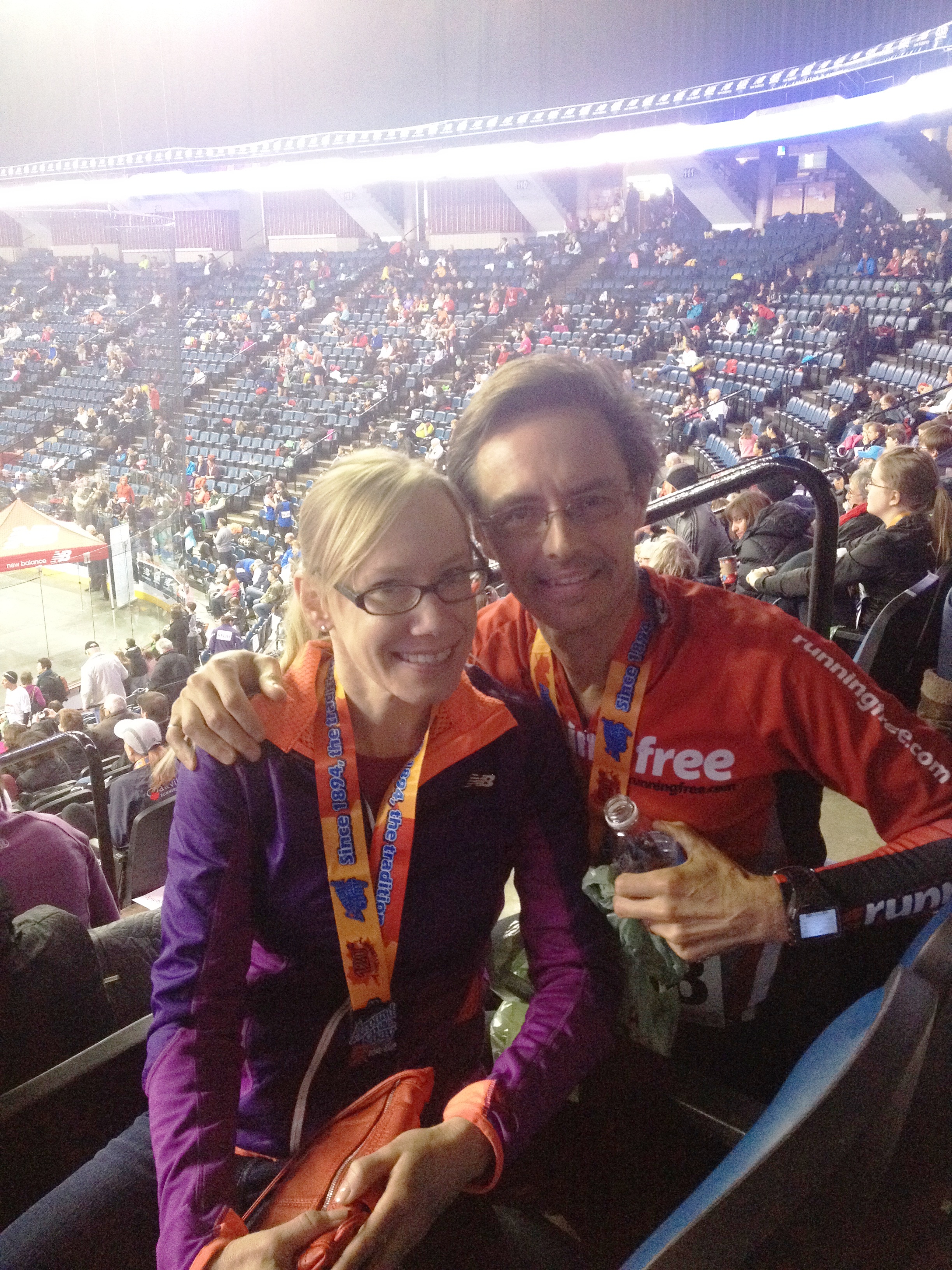