two words really sum up the key variables that affected the experience and outcome of this year’s mississauga marathon for me.

i was genuinely excited to visit the expo this year – in previous years it was a pretty utilitarian visit, getting my kit and a few gels (at the normal ‘expo special pricing’) in record time and heading back home.  the expo is straightforward enough but nothing at which to particularly linger around.

what was different this year was the Skechers sponsor booth.  i was eager to meet some of my contacts with whom i gotten acquainted vis-à-vis the Skechers Performance Division brand ambassador program.  it was well worth the visit – Skechers had two exhibitor locations – one just past the t-shirt pick-up table and one at the end of the first exhibitor row.  both were high-visibility high-traffic locations, so they were really featured in a way like no other sponsor at the expo.  i was able to meet several Skechers staffers, plus the national manager for Skechers Canada – who when introduced to me by the marketing manager said “oh, you’re that patrick?” and then proceeded to show me that he had the rendezvoo point blogpost why not skechers …? bookmarked on his phone.  how cool is that?

photo from Skechers Performance Canada
apart from the meet-and-greet with Team Skechers, i didn’t pick up my usual complement of gels as the next day i would be stopping by our local Running Free store to pick up my team kit gear which had arrived, so i figured that i would also take advantage of my team member discount to get the gels there.  instead i spun the Subway Commit To Fit wheel and had to run 30s on the spot for a prize – and took home a cool Subway water bottle.
race day

with a usual 4:00 am rise-and-shine alarm i started off my day with a peanut butter/honey/chia bagel, a bowl of quinoa-oatmeal and some gatorade-beet juice mix.  apart from the juice combo, i’d never tried this kind of breakfast before (note to kids and first-time marathoners:  don’t do this).i arrived at the start line area about an hour before the gun would go off, providing me ample time to suit up, grab a couple of selfies, get in and out of the porta-potty as well as squeeze in a warm-up jog. 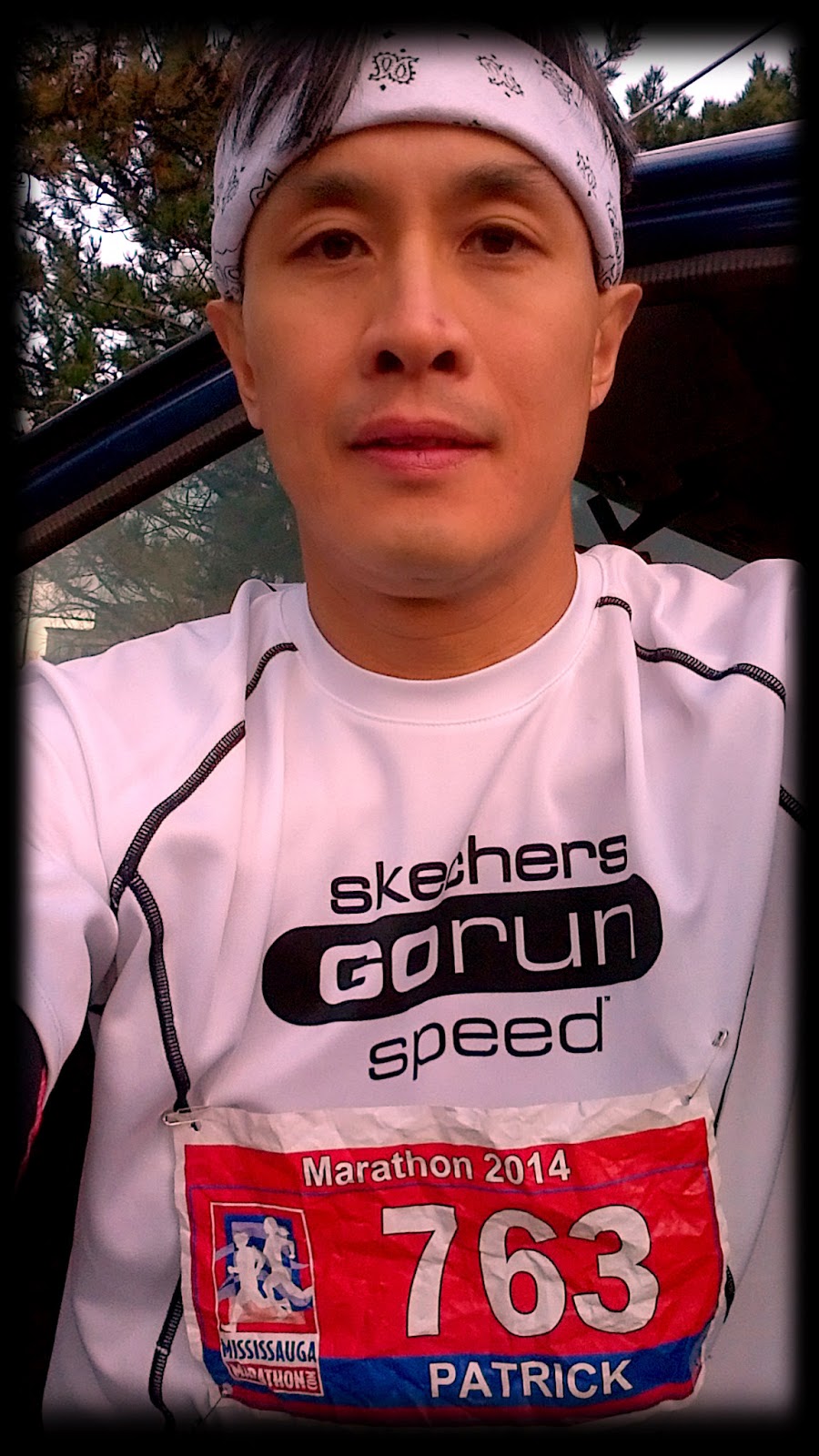 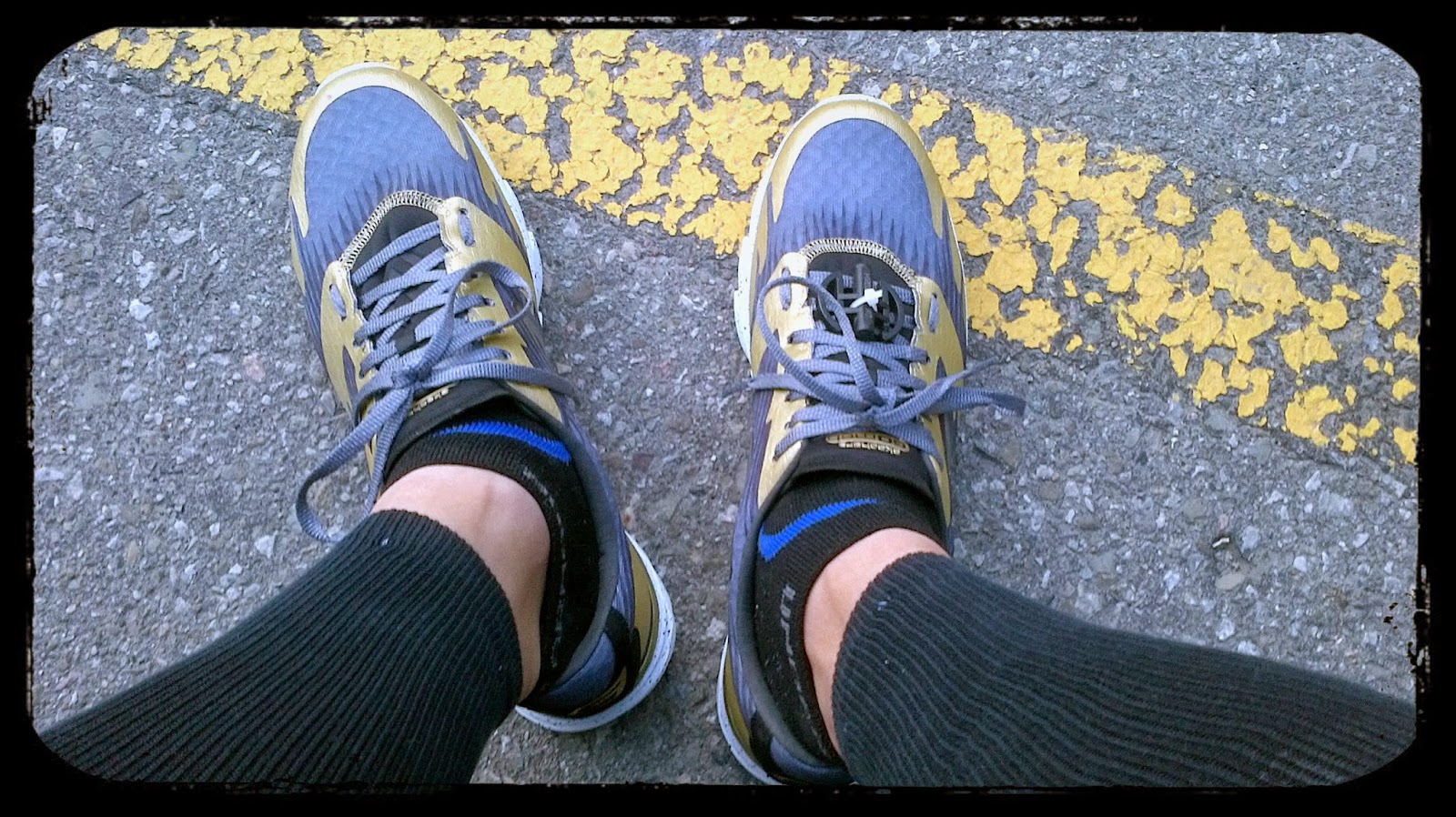 it didn’t take long to realize that the wind would play a factor on this day … with reported gusts up to 50 km/h it wouldn’t matter whether it was coming at us from behind, the side or in front because running on a windy day is always going to require more effort than a non-windy day.

as i proceeded into the starting chute there were three key people that i ran into:


kms 1-5:  22:34
i wanted to start off conservatively, not expending extra energy weaving through the crowd and getting a rush from passing slower runners.  i’d read that starting out too fast and surging past runners uses up exponentially more glycogen than running at the same paces in the latter stages of the race – so the game plan was to play it nice and easy.
which worked until after km 2 when the 3:20 pacer went flying by me, easily clocking a 4:00 min/km pace.
what was he doing?  was my garmin giving me a misread?  and how would i ever hope to finish in 3:15 if the 3:20 guy was ahead of me?
enter cardinal mistake #1 – i pushed it to try to keep up with him.  i definitely felt the increased effort, and was hoping to God that i wouldn’t pay dearly for it after 30k.
kms 6-10:  21:55
at km 8 i once again did something that i’ve never done before in a race – i made a quick dash into the bushes for some bladder relief.  it didn’t actually feel too too urgent a call to nature, but i figured that i needed to slow down anyway and that i would feel better without the pressure at my waist.
kms 11-15:  21:59
a fairly uneventful block of 5k – i felt like i was in a good rhythm and was running alongside someone from the brampton benders running club.
kms 16-25:  45:07
just after 15k a funny thing happened … i caught the 3:20 pacer!  i asked peter whether or not he had gone out faster than required and he answered yes, but that now the toughest part of the course was behind us and that they would ease back on the gas at that point.  i didn’t check, but i think that if he did have any aspiring 3:20 racers with him they would have been already sucking wind if not left trailing somewhere behind him.
after this i also felt the burn from going out hard, and wanted to cruise for a stretch in the hope of having something still left for a kick at 35k.
kms 26-35:  46:25
toughest stretch – not only because this covered the section where most runners experience ‘the wall’, but also because the wind was at its most active as we ran out toward the lake and made the u-turn dead into it.  the 29th km was my second slowest at 5:00 min. because there were times that i was leaning forward so much to counteract the wind’s effect.
kms 35-42:  38:21
at the 35k mark i mentally switched gears into racing mode – i pitched the gloves that i’d been wearing (and at the same time inadvertently threw away the boston marathon-coloured rainbow loom bracelet that my daughter had made for me) and started to activate my glutes for a stronger push-off.  three steps into racing mode and my right hamstring started to spasm and threatened to seize up altogether if i didn’t put an end to all this nonsense … so looking at my watch and recognizing that at this point i could cover the remaining distance at 5:00 min/km and still hit the BQ mark i decided to stick with the simple cruising pace that i’d maintained to this point.
discretion is the better part of valour, they say.
as i hit the finishing straight i took off the bandana that i’d been wearing and started whipping it around in the same fashion that tsegaye kebede had done as he approached the finish line in the 2013 NYC marathon.  that guy is so much fun to watch, and reminds me that you can compete at the highest level and still let everyone know that you’re having a blast.

as i crossed the timing mats i could see that my gun time was pretty much 3:15:00 bang on, and simply trusted that my chip time provided me with the slightest bit of buffer to come within Boston Qualifying time.

post-race
as i didn’t have any one travel down to the race with me, the first person to greet and congratulate me when i crossed the finish line was nick from Skechers … they really are my family, already!


aside from a calf cramp that ambushed me while wandering in the post-event picnic area, i was feeling really quite good after putting out a PB effort – but the chill in the wind was especially noticeable after i’d stopped running, so i headed immediately for the shuttle buses back to the start line parking lots.


while in transit i wound up chatting with a guy named george who’d finished a few minutes ahead of me – i recognized his shirt because i was drafting off of him for a bit, and found out that while he’s run marathons in places like boston, san francisco and even sydney (australia), he’s not even what he would consider a runner.  he’s a cross-country skier, which just serves as a reminder that when it comes to running endurance events the key to a great performance might just be more the ‘endurance’ part than the ‘running’ part.

all in all, i’m very pleased with my effort to finally attain a BQ time – and while a trip to the boston marathon in 2015 is still by no means a given (the registration process may just weed me out because i cut it so close – 17 sec. under my qualification standard), i know that i’ve outdone my old self and claimed the title of boston qualifier … and no one can take that away from me.

many thanks to all those who helped me to reach this milestone in my running career:

next stop is the limberlost challenge on july 12 – my ‘A’ race and the next new title to adorn … ultrarunner!
#GOlikeneverbefore!