I was excited to get the season started especially after such a brutal winter we experienced the past few months. It turned out to be a beautiful opening day (the best we’ve had in Ontario thus far) to the MultiSport Canada Triathlon/Duathlon Series, and I was looking forward to putting my fitness to the test and seeing my “Summer Family” again.

Pre-race: After some chatting with a bunch of folks, I got set up in transition, and got in my pre-race ride warmup. All felt great and the equipment was working well, at least for those 20 minutes – more on that later. The problem with doing a ride warmup is on occasion, late comers see a gap in the bike racks and assume there’s a nice spot waiting for them, despite the fact that I clearly laid out my stuff to indicate that someone was there already. That did not matter, someone jammed their stuff right in there and now there was no more room for me. Instead of making issue out of it, I saw an extra rack that was practically empty and set up there. I keep thinking about making a sign that says “This spot is taken. I am out doing a warmup ride.” to hang up on the rack while I am gone. It may be time to put that in action. So for those of you reading this, when you get to a race and are looking for a spot in transition, be mindful and look for clues that someone might be in a spot already (run and swim gear laid out but no bike stuff) or just ask any athletes set up in that area.

Gear:
Ignition Fitness team kit, Running Free visor, arm warmers, and jacket.
QR Illicito, LG Aero helmet, Garmin 910xt, K-Swiss Blade running shoes.
First run (5 km) – 24:56 (5:00/km)
This run was actually 36 seconds than what was officially stated. Why? I was out doing run warmup and PRP (pre-race pee) and the race started without me. The published start was 9am, but obviously there was a morning change and the start was 8:55am. Anyway, I was making my way back to the start and heard “30 seconds”, I knew what that meant and ran full on to the start and while the race was going one way, I was going in the other. The race photos show this (see below) along with John Salt and some of spectators having fun with me. I believe John said, “He just wants to give everyone a head start.” I replied, “At least now I fully know where I started and can make my way through.” 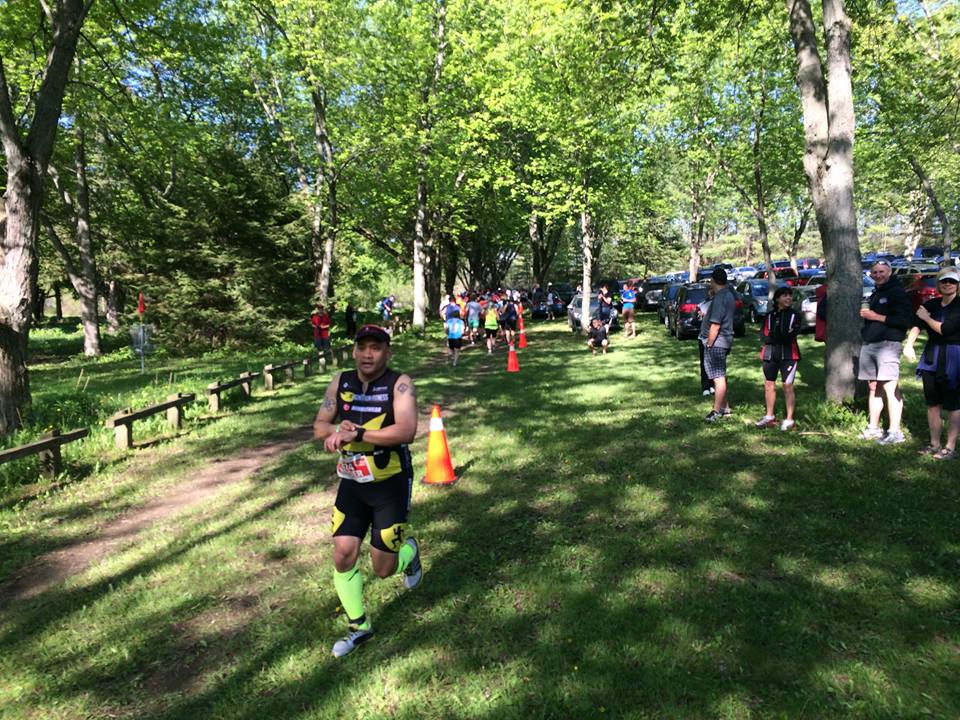 I ran a bit faster than I wanted during the first kilometre to make up that gap, then settled into a comfy pace. The plan was to keep it in that 5:00/km range – which is like speed work for me since my current training is all geared towards Ironman and I am rarely running anywhere near that. But all felt great and the pace felt comfortable and not overreaching so I went with it and given my late start, I was running just under 5:00/km pace. I gladly accepted that and it gave me a good indication that my Ironman run training is coming along nicely. Another indication that you don’t have to run fast or do a bunch of speedwork to go fast.
T1 – 1:01
Nothing spectacular here. It is a long run up the grass to the mount line and that is where most of my time was accumulated. I definitely could have trimmed a few more seconds off.
Bike (20 km) – 37:17 (32.2 km/hr)
I climbed strong out of the park and as soon as I made the right turn and got off my seat to crank up the pace I heard some weird noises and felt some wobbling from my wheels. My immediate thoughts were it must be a brake rub, flat or even worse a busted wheel. I got off the bike, check and discovered that the tire was going flat. However, for some reason it was still holding some air in there (probably 60 psi at that point) so I made the decision to keep riding until I felt the rim. I was extra careful with each corner (the noises and wobble that came when the brake was applied reminded me to do that), and just keep on going. I was definitely fighting the extra resistance from the wheel but keep on plugging away. By the time I hit the 10 km turnaround, I thought I’d have to pack it it because the noise and wobble was at an all-time high. I checked the tire and it was still holding some air so again I set off to continue riding until I felt the rim. I made it back to the park, was extra careful on the downhill, and headed to T2. For those that care, avg power was 211w, and NP 224w – below what I expected due to obvious reasons. 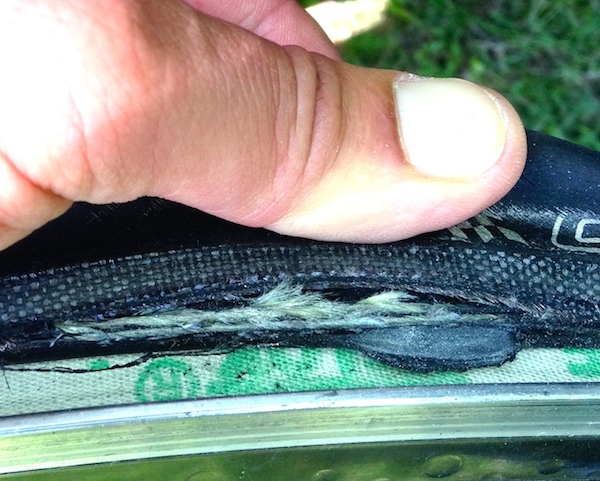 Did a quick change and was out of there.
Second run (2.5 km) – 12:01 (4:49/km)
I love the second runs in duathlon (most of the time ;), I felt super strong today and just went with it. I did not want to go too crazy and have unnecessary extra soreness to affect my training the following week but I wanted to stay away from some faster runners coming from behind. I ran strong and surprised myself with the pace I was able to maintain.
Total time – 1:16:07 – 25th overall out of 106, 7th in the 40-49 age group
Nutrition intake:
Pre-race: Boost in the morning, plus a giant coffee on the drive to the race.
During the race: Honeymaxx in my Profile Aero HC System. Both available at Running Free. Make sure to use the code 11296 if you are shopping there. It will save you a few dollars.
Post-race: 500mL of 2% White Milk courtesy of the Recharge With Milk Recovery Zone.
Final thoughts:
A decent start to the year. Looking forward to showing what I can do on the bike at the next race.

Kudos to my fellow Ignition Fitness athletes on their podium placings. And of course my fellow Team Running Free members on their races. Catch you at the next one.