Last Sunday I did volunteer to the Milton Women Triathlon event.

After 6 years of participating in many races and events, I realized that this was the first time I was participating as a volunteer.

Overall it was a great experience.

They asked me to be there at 6:45 AM and since I live in Newmarket , I had to wake up very early. 1 hour drive according my GPS.

I arrived there on time and I was surprised to see that many people was already working hard to make the event happened.

One hour later I was parked at my station, my responsibility was as a Bike course Marshall at the very far end where the bikers needed to make a left turn. Appleby and 14th.

It was a nice cold morning and I was standing there alone for about 45 min until the first biker arrived. Diligently I indicated her to make a left. After her more and more bikers arrived and I got into my job very focus to make sure that my indication was understood.

I probably said “LEFT” a thousand times in the hour and a half period I was stationed there.

Sounds boring but believe me, it wasn’t at all!

I felt really good receiving those many “thanks” from those women biking hard that day. Some of them focused, some others exhausted and others just having fun.

When the last one passed, the Marshall Captain came to pick me up to go back to the base. But I did preferred to run, the morning was nice and I was inspired by the event. Rolling hills made it a good work out at the end.

Many people recognized me and waved and thanked.

It was very nice. Honestly I do recommend this to everyone. It is a way to give back and believe me it feels very good.

My next race I will wave and thanks at every volunteer for the work,  dedication, for their time. I never realized that many times they are invisible for you but they are there to make the event the best possible experience. They do that just to give, they don’t get pay, they don’t win a medal, in my case I even didn’t knew anyone.

Without them the event would happened, or it wouldn’t be the same experience for you.  Their only reward is your thanks.

I will do it again! Please join me next time. 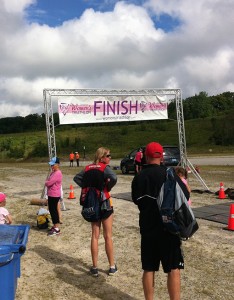 View all posts by Julian Fernandez →