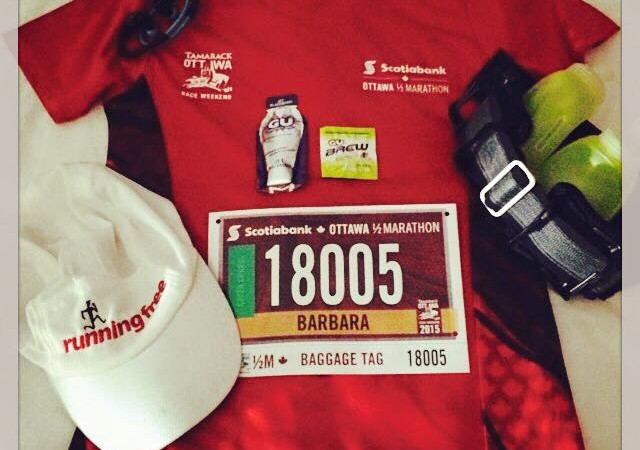 After months of prepping and training, I arrived in Ottawa, Ontario for the Tamarack Ottawa Race Weekend half marathon this past weekend. Almost 50,000 people took part in the various events of the weekend, and it was just incredible to be a part of it. Literally thousands more flooded the downtown core to watch the races and cheer on friends or family members – everywhere in the city, the energy was literally electric.

My race weekend started off on Saturday afternoon at the Shaw Centre Health Expo with my good friend and her family, where I picked up my bib and checked out the great vendors onsite. Everywhere we went that day we heard people greeting one another with questions like “Are you running?”, “Will you be cheering on the other runners”, and “What’s your goal?”. Runners of all experience levels chatted up a storm! It was so nice to hear such camaraderie.  I did regret that I couldn’t meet up with my Team Running Free teammates, who were able to meet for a group photo on Saturday afternoon!

I spent the rest of Saturday at my friend’s home – catching up, taking in a quick 4km jog to keep limber (complete with some silly running pics), and enjoying a wonderful homemade pasta dinner.  I laid out everything that I would need for the race, and then headed to bed nice and early. 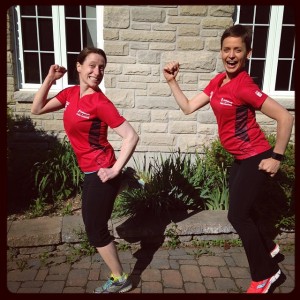 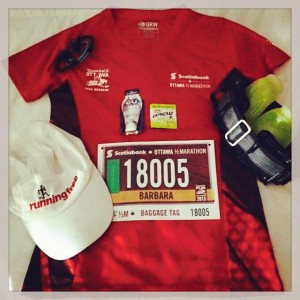 Sunday I awoke to chilly conditions. The race started at 9am, and I was praying for it to warm up (little did I know how hot it would actually get by mid-morning!). After a toast and peanut butter breakfast, I prepared my Gu Brew and added a Gu gel (Jet Blackberry, one of my favourites!) to my pouch and headed the door with my cheering squad.

At 8:45 am, I was in my corral, and a few minutes past 9:00 am, we were off and running. The first bit of the race involved dodging people and trying not to trip due to the large number of people on the course, but traffic after the first kilometer or so the congestion eased and I was able to get into a steady pace.  After a cooler start, the weather warmed considerably and I started to really feel the heat around the 10 to 12 km mark. It was then I really wished that I had put on a tank and shorts instead of a sleeved shirt and capris! Throughout the run, I decided to stay focused on my form rather than worrying about my speed. I was also mindful of my heart rate and breathing due to the increasingly warm weather conditions. Nevertheless, I definitely took time to notice the amazing scenery along the route.  Here are a few other observations:

– The spectators were absolutely incredible. I’ve never seen this level of enthusiasm, support, and encouragement from the crowd. Entire families sat on sidewalks, front lawns, steps…wherever they could find room…to cheer the runners on. I saw some of the most hilarious signs along the way, and more than a handful of strangers called out my name to encourage me to keep going.

– Crossing the border into Quebec was fun! I loved how the spectators screamed and cheered us on in French – I heard things like “Félicitations, tout le monde!”, which was fabulous

– The live music along the way was a great touch!

– There were so many water stations! Having access to water and Gatorade every 3km was wonderful. Not only did it keep the runners hydrated during the exceptionally hot day, it made time go by much faster. My running buddy and I kept saying to each other “wow, another water station already??”

The not so good:

– The race kit pick up process was quick and easy, though we were a bit surprised that the swag bag was empty. We didn’t anticipate that we’d have to go through the whole expo to pick out our own swag. Not a huge issue; just a bit surprising when considering some of the great race kits that I’ve gotten in the past.

– By the time I reached the one and only fuel station along the half marathon route, they had run out of Power Bar gels! Due to superstition and previous experience, I always pack an extra Gu in my fuel belt so I was covered, but I felt really bad for any runner who was left stranded!

– Certain parts of the course narrowed considerably, creating a bit of a bottleneck and leading to some quick maneuvering to avoid falling or stepping on other runners.

In any case, crossing the finish line was an incredible feeling, as always. I felt accomplished and motivated.  This really felt that the Tamarack Ottawa Race Weekend half had a something for everyone. Although I didn’t achieve a personal best this time around, I had a blast and am just that much hungrier for a sub-2hr half.  A few things could be improved but this is definitely one that I would suggest others run…in fact, I’m already in discussions about doing the race again next year! 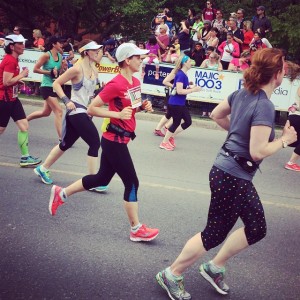