more and more i’m enjoying races for the successes of my friends and training partners.  this race was a mixture of both great successes and crushing defeats (or is it de-feets …?).

i’d planned to enter this race once again as an opportunity to support our local chapter of MEC and to encourage their grassroots fitness efforts through these economy-priced but excellently-executed race series events.  it fit into my training schedule as i had on tap a “35km at comrades pace” run, so my thought was to run an easy 14km lead-up to the race start time and then join in the half-marathon (not unlike what i did at at the previous two MEC race series events this year).  i had a particular interest in the HM distance this time around not just because i’m less than three weeks out from The North Face Endurance Challenge Series 50-miler but because our Barrie Running Ninjas saturday group run had included a number of people who had joined MEC’s half-marathon training clinic and i was very much interested in seeing them all hit their goals. 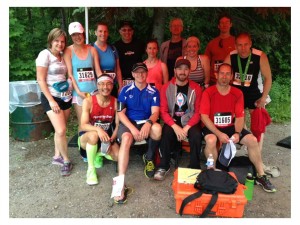 having arrived about 90 min. before the start of the HM i couldn’t even park in the designated runners’ parking lot as the barrier gates were shut/chained.  the MEC crew had anticipated a record number of registrants for this event so overflow parking with a shuttle bus was organized, and i thought that i would happily park at the off-site (by about a km) lot since i was logging extra miles anyway.  in the end i got prime parking right at the start/finish area and still managed to trot out my pre-race distance down by the shores of lake simcoe.

as the gun time neared i crossed paths with my good pal and fellow ninja lewis who was volunteering this day as he’d developed blood clots in his leg which necessitated him taking time off from running.  as he was an unofficial co-leader of the HM clinic for MEC i’m pretty sure that this was disappointing and frustrating to him, but wisely he chose the path of discretion as the better part of valour and went with his doctor’s (and also his wife’s) advice.

i also squeezed in the last of the pre-race kilometres with another ninja, trevor, who’d cycled his way up from barrie (a distance of close to 40 km) and was treating this HM as a bit of a brick workout – even though he doesn’t have any triathlons on the calendar.

the race
i was closely monitoring my time and my distance, as it worked out nearly perfectly that just as i hit 14km on the button i was the last person in the pack to cross the starting line.

i’m not sure that i’d ever started at the very back of any race before, and what i’d found was that i was necessarily bobbing and weaving my way forward since the slowest of the half-marathoners were basically walking their way down the single-car sized rail trail.  my plan was to run at base pace for the first 10.6km, hit the turnaround point (it was an out-and-back) and then race the home half and try to pick off as many people as possible.  early on i was passed by james (a HM clinic participant) who looked really strong and efficient – his goal was to come in at under 1:45 and i had a pretty good sense by the look of his stride that he was going to nail that target.  a few other competitors overtook me including a guy in an Orillia Freewheels cycling top who looked like a very strong all-around athlete – and since he looked like maybe he was in my age-grouping i set my focus on keeping him within visual distance for as long as i could.

a quick word on organization – as the route was along the oro-medonte rail trail there wasn’t a ton of marshaling required, but there were several road/concession crossings where there was either volunteer or paid police staffing.  although there wasn’t a great deal of traffic on these rural roads early on a saturday morning this added bit of assistance was very much appreciated … when they were paying attention (foreshadowing … dom dom dom!)

the conditions for the day turned out to be just about perfect – somewhere in the ballpark of 14-15°C, a mostly overcast sky, just a smidge of humidity but no rain (and more importantly very few bugs!).  i felt like i was running a very controlled first half as i approached the turnaround aid station, having identified about 12 runners who were ahead of me including my good bud ricky ‘the real-deal ninja’ doucet.  having downed a gel in approach of the aid station i paused for about 5-6 seconds to nab a cup of water and a few nuun tablets before shifting it into racing gear.

for the second leg of the race i definitely clipped away at a quicker pace – nothing all-out, but just increased turnover and a change in my breathing pattern (sucking back a little more air with each inhale).  as i passed ricky he told me that he was hurting, and i knew that he’d been trying to rest up a lower-leg issue.  i hoped that it wouldn’t hinder him too badly, and would have to wait to see how he finished up to find out for sure.

my strategy to pick off as many fellow competitors as possible worked as a motivator to put forward a strong second-half effort.  i think that i managed to pass six runners in total, including james and the Orillia Freewheels guy.  as i closed in on the final 5k i saw the 10k race leader (they’d started an hour after the HM) approaching his turnaround point and recognized him as fellow Skechers Performance Ambassador and sub-elite athlete frank sorbara.  we exchanged greetings and he went flying past me in both directions looking as if nothing would prevent him from claiming the win (which he did in just over 33 min.).

now remember the marshals that i mentioned before …?

as the path became more congested with HM, 10k and 5k runners all occupying the same path (and sometimes traveling in both directions) i approached one of the road crossings where a group of about five runners were 20 metres in front of me heading back as i was.  as they crossed the road with the marshal holding back traffic, i noticed that the marshal began to wave on a car that had been waiting.  the problem was that i was booting it much faster than the group ahead and either the marshal didn’t see me or miscalculated my rate of speed – so i’m thankful that the SUV driver did see me and clearly processed that it was not going to be an unimpeded crossing for either of us and decided to wait.

that near-miss was one of two minor blemishes on the day.  the other was that as i was gearing up for the final 2km the path became more occupied with runners, mostly the slower 5k entrants.  while most of them could detect my approach on account of my harder breathing i did come upon three runners walking (yes, walking) abreast, blocking the entire path and each of them wearing earbuds so as to not hear my shouts of “on your left!”.  after repeated warnings even up to the point where i was just mere footsteps behind them i had to squeeze between the two ladies with a bit of an exasperated “ok then!” for the final sprint home.

in the end i crossed the line with a chip time of 1:36:58 (with approximately a negative split of about 90s according to garmin connect and strava) – and tongue-in-cheek blurted out as i stopped, “tell me that i came in first in the 35k division!”. 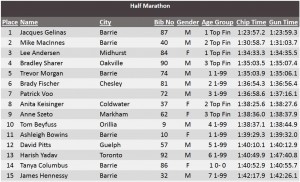 post-race
overall it was a pretty stellar day for the Ninjas – trevor crossed as the third-fastest male (based on gun-time finish) in the HM distance; scott took fourth overall in the 10k division; and mark was 3rd overall in the 5k race.  our HM clinic runners all did fabulously too – james clocked a 1:42:17, jo and sarah came in at just over 2 hours and helen finished (and was smiling!). 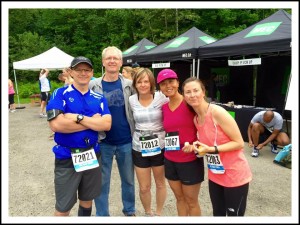 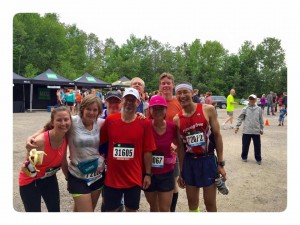 the downside to the day was that ricky experienced a nasty pain and accompanying sound at around the 15km mark that reduced him to an intermittent dash/hobble/walk for the remainder of the race.  to his credit he still powered through for a sub-1:55 time but ended up both at the first aid tent and later at the hospital emergency room.  last word was that he had stress fractures and torn ligaments in his right foot, so it was more than just a bit of overtraining.

i got a quick chance to chat with frank after his win and he was looking as fresh as a daisy, and we also swapped thoughts about the GORun 4 (which he wore to victory and which my friend mark wore to his podium result).  i also stopped for a quick chat with fellow Team Running Free athlete dakota poulter who took top female finisher in the 5k race.  she was slightly mortified (i think) since it was her parents who dragged her over to meet me and snap a quick Team RF photo op.

all told another great MEC race, an excellent day of running with lots of friends (i didn’t even mention half of the other familiar faces that i spotted – tina, rose, mariane, sonja, rick, brenda, nancy and more), and one more confidence-boosting workout in advance of my biggest test to-date.