When Is Easy Too Easy

I was left scratching my head and licking my wounded pride after the Hamilton Marathon. What the hell just happened to me?

My legs were the most shredded ever, on a 2:56 result. I was barely able to walk for two days after. I was obviously not sufficiently prepared. But how could that be?

I had followed the same plan that got me a 2:42 result in 2013! Or had I? Some number crunching revealed the truth: my weekly training load was no where near the 2013 load, even if I had run exactly the same mileage.

It came down to this: I had done all the quality at the prescribed paces, but all the other easy days that filled in the other five days of my week were run too slow.

Yes, too many runners don’t back off enough and find injury. I certainly felt in great shape, but my results often raised conflicts. My pace on hard days was spot on. But on longer runs 30k and longer, my HR indicated too much effort.

Here is my weekly training load leading up to both the 2013 and 2015 Hamilton Marathons. I use Jack Daniels training point system. The faster you run and the longer you run, the more points you earn. 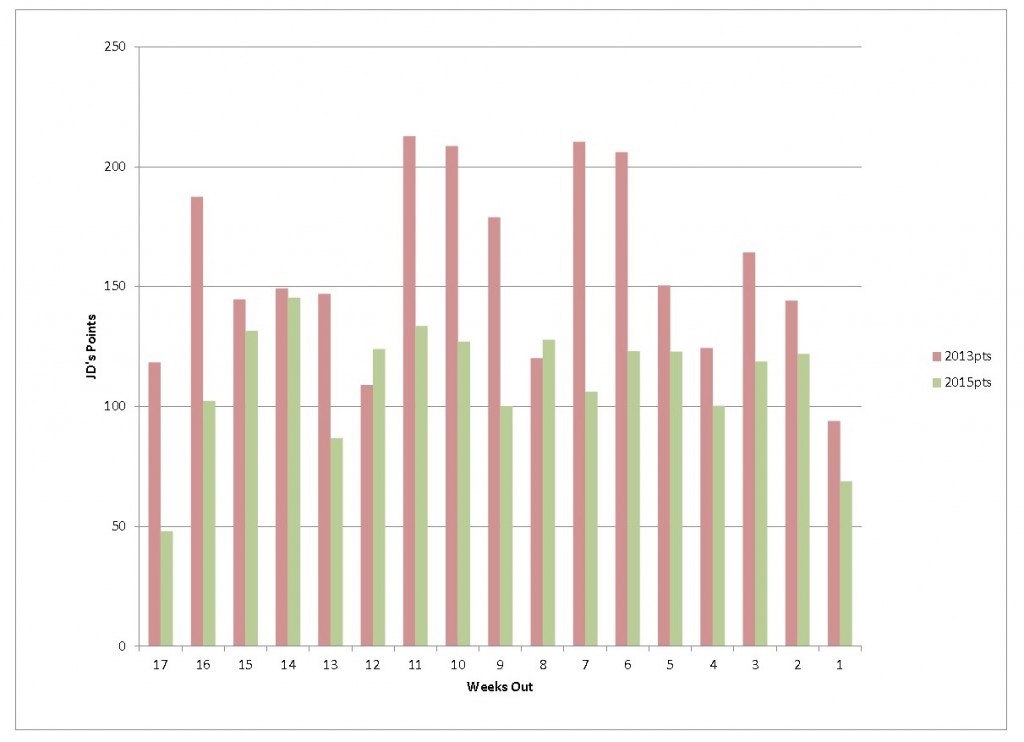 While it is still not clear to me, it appears you need to train at a certain weekly load to expect a certain result. That load must be weighed carefully against your body’s ability to recover from and sustain the load desired. Select too high a load and setbacks will soon follow.

What do those points mean? 50 points is appropriate for a novice runner (grade 9 cross country), 100 points for a senior year high schooler, 150 point collegiate level training, and anything over 200 points is elite territory.

Another way to think of it: a sub 3 hour marathon result is going to take a training load around 125 to 150 points. Something under 2:45 is going to be around 175 points.

The chart explains it all. I was gunning for a 2:45. The pace was excessive for the training I had done. My race was as good as over by the time I had reached 21k. Lactic overload in full burn, I had no choice but to stop and walk.

But how hard should I have been training? The first step is to understand what is required to generate a similar training effect regardless of pace and effort. The next table shows some of my training paces, distances and times that yield the same training load. In essence, each workout is worth 10 points toward my weekly total. Any combination of them adding up to the desired weekly total would have yielded the desired training effect, and positioned me for success.

And this was my big mistake. Too many of my runs were done around 5:00/k pace and not long enough. I just had to run some of those easy days faster (or longer – yikes!). Still in my easy pace range, just not as easy.