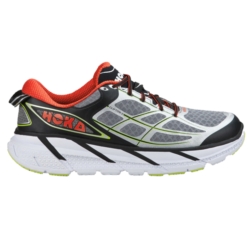 I ran my first marathon in 1998.  At that time, I didn’t consider myself a “runner”, but maybe, as someone who ran. I was young and brash enough to figure that one of the least relevant things I could think about was shoes. I figured I could run in anything, and that is basically what I did. I remember at least 3 different shoes that I wore during my training for that race, all chosen according to somewhat arbitrary and shifting criteria: color, brand and, oh ya, they also had to feel good when I put them on.

Skip forward about 10 years later and I decide I want to become a triathlete. I had continued to run, even competing in a couple of half marathons here and there, but most of my running was “low mileage”, a half hour to an hour, here and there, mainly to burn calories and to augment all the bodybuilding I had been doing at the gym…My laissez faire attitude towards footwear was largely un-affected by time; I can recall, for example, going for a 1/2 hour trail run in Sedona, just because I felt like it, wearing hiking boots; there was more than one run in tennis shoes; in fact, my favorite pair of running shoes for a while was a laceless pair of “basketball” shoes made by “AndONE”, and they were really just fashion kicks.

But all of this lack of attention to footwear made a sharp 180 when I started to train for triathlons, upped my weekly mileage and, about half a year into my new endeavor, experienced two injuries which almost forced me to quit. Injury one that year, was really a re-activation of an old torn meniscus from my tennis years, as it turns out, perhaps worsened by my choice of “kicks” at that time, which were trail shoes, un-beknownst to me, that I was beating around on cold, winter pavement a few times per week. I got through this injury, but my innocence was over, and I was now paying full attention to any knowledge that might save me from injury and keep me running towards my goal of completing an Ironman one day.

I went to see a sports doctor and then a podiatrist. I was told that I over-pronated (probably wrong based on what I know today, I actually think I tend to under-pronate on my left) and was steered towards support shoes and eventually orthotics.

I continued to run. The pain continued. It waxed; it wained. I think most people would have given up but I was just too emotionally invested in my dreams to contemplate that.

And then…I came down with an Achilles injury and was forced not to run for several weeks. It was during that time that I realized more fully than ever what a beautiful and free thing it is to run, what a gift. Instead of giving up, I became confirmed in my desire to run again, to run well and often.  I went to see a very experienced runner who examined my gait and turned me away from orthotics and into a highly cushioned/neutral trainer. The Asics Gel Cumulus. From that day forward, my life changed, and for the better.

I came to realize, that at that stage of my development, in which I was building a base, putting in the miles that would result in slow and deliberate micro-adaptions in my musculo-tendinous and connective tissues, in this phase, when I was becoming a runner, getting my body used to 50 plus k per week, that a highly cushioned/neutral shoe was absolutely the best shoe to have on my foot. It allowed by body the freedom of movement it needed to develop it’s own running style, while insulating me from the brutal effects of constantly pounding all of my weight in propulsive motions against concrete and ashphalt, in repetitive motion.

It was the same experienced runner who introduced me to the idea of rotating through a few different pairs of shoes, as a way of relieving the body from some of the effects of repetitive motion, giving everything a slightly different feel, stimulating different pathways and thus avoiding injury. I became a firm believer in this philosophy and followed it for a long time, and with good effect.

After a while, I became more and more interested in speed, and began to flirt with lightweight trainers and race shoes. I won’t go over every brand I have worn, but they were quite  a few. One “eureka” moment that stands out was the first day I put on a pair of Nike lunar racers. Never before had I experience such a counter-intuitive feeling of light-weight and cushioning. It was a paradigm shift, and one that, I believe forshadowed the movement we now see towards maximalist/lightweight running shoes, of which the Hoka is the most obvious example.

Eventually, I tried on a pair of Saucony Kinvaras and fell almost immediately in love. These shoes were light, almost like race flats, neutral, had a low ramp height (which I was beginning to appreciate more and more) and had a kind’ve bouncy feeling like they were absorbing shock and returning energy in a way that such a light shoe should never do. My love affair with Kinvaras went on for several years, and they became my go to shoe, eventually displacing all others in my rotation. I used them for all of my long runs and raced in them for several Ironman marathons. They really were/are great shoes that combine much of the best of what minimalist/natural running shoes can be, while still providing a decent amount of cushioning, and being light enough to work as a race shoes at any distance.

During my time in Kinvaras I am happy to say I had no injuries. Of course, there have been aches and pains but nothing that stopped me from running. I had developed some plantar issues especially following very long runs, which responded well to rolling (another blog). Of course there was the unavoidable and even helpful (isn’t it?) deep pain in my quads following long runs that let me know that I am beating myself up good and stimulating adaptation. And then there are tight calves… but this is all part of running…..isn’t it???

This past fall I decided to cross over to the dark side and try out a pair of those ridiculous looking Frankenstein platform shoes that I had seen some of my training partners running in over the summer. I wanted to see what they were all about, but i was dubious. I settled on the Cliftons as I was told that it was most similar to the Kinvara.

My first impressions in the store were of how fun, springy, light and responsive they felt. I couldn’t wait to take them out for a real spin. On the road, there were issues in the first iteration of the shoe that centered around the slim tongue and also the insert slipping around a bit. (these have been sorted out in the Clifton 2). But these issues were not enough to over-shadow the profound feeling of fun I had running in them. They are light and feel fast. The rocker seems to encourage your foot through a nice landing and take off, but these are not “suport shoes”, my arches feel free, my toes can splay, my foot can roll as it must.

The most obviously wonderful thing about these shoes is the cushioning. Each step felt like I was running on broadloom, but not dead, just dead comfortable and pleasant. These shoes even feel like they are providing cushion at the end of a 2.5 hour run, and that it amazing, because anything else I have run in feel like pancakes by that point. The combination of lightness and cushioning that is provided in the Clifton is absolutely unparalleled, and is like my earlier experience in the lunar racers, but on Steroids.

And I have gone through a good cycle of fall and early winter build, with many 50 plus k weeks, with no plantar pains, less calf stiffness and much speedier recovery in my quads after the long ones.

The other thing I love about my Hokas is the stack height. I was worried they would feel unstable. They don’t. I might not choose them for trail running, but on pavement, they are rock solid. And the stack height has done something nice to my stride. It feels lighter, impact feels more open, longer and it seems easier to maintain an open stride. I believe that the higher stack height provides this proprioceptive sensation, which in my case, has been one factor in contributing to a substantial increase in my base training pace.

The liner inside my first pair of Hokas read “keep running”. I like that. And that is exactly what I think these shoes will allow me to do for longer, and maybe also, lots of other people. Keep running.

The cliftons, for me, are not a high mileage shoe. I figure I get about 3-400k out of a pair, and I own four pairs right now. I have continued to run very occasionally in my old kinvaras, but mainly on the treadmill. I plan to centre my year of training and racing around the Hoka line, perhaps looking into one of the beefier models as a long run, more durable alternative to put in the rotation. I look forward to the new flats that are coming out in spring….

So, that is my journey, and why I love Hokas. I hope that it has been in some way, entertaining and maybe even helpful.

View all posts by John Klukach →