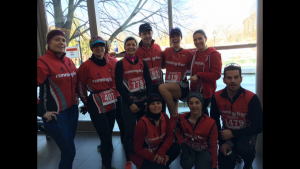 Last weekend, I ran the Chilly Half Marathon for the first time, and I couldn’t have asked for better conditions! The forecast called for a high of about 5 degrees with a little bit of a wind, no snow, and a lot of sun.

Despite the great running weather, it was nice to be able to wait inside the Performing Arts Centre before the race.  I thought that the announcers inside were great at providing directions to the runners, and volunteers were plentiful to point people in the right direction.  I heard that pre-race massages were even being offered, though I wasn’t able to take one in. Instead, I was thrilled to be able to meet up with some Running Free teammates for a team photo! It was so nice to finally put faces to names, and to meet people in person.

The half marathon run started City Hall at 10:05, which is the latest that I’ve ever started a race. At first, I was concerned that this would throw me off my game, but it was actually really nice to be able to sleep in and fuel properly at breakfast before the race.  Hello, oatmeal!

Even though nearly 3000 people ran the race, it did not feel crowded once we cleared out of the start chute. The only issue that I experienced was finding my pace bunny – she was actually ahead of a “faster pace bunny at the beginning of the race. This wasn’t a big issue and she quickly corrected her timing, and I found the right pace group. 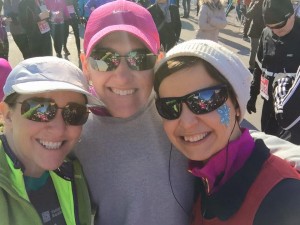 The half marathon course was beautiful, mostly flat, and really scenic. I loved running through the residential part of Burlington, right along the waterfront. I loved that there were tons of water stations along the way, and that there were lots of people along the route to cheer on all the runners. I always find that it’s the energy of the crowd that helps me along the way – and especially during my final push. I thought that it was especially sweet of the members of the congregation who handed out orange slices and bananas to the hungry runners ; it was messy but appreciated!

As for me – I’ve been battling some issues with fatigue and breathing in the cold, so I was just hoping to finish the race smiling. The first third of the race went by pretty fast, and I managed to maintain a slow and steady pace.  I started feeling some fatigue set in at about 7km, at which point I moved towards a run/walk combination. I made up my mind to focus on keeping my pace and effort as constant as I could for the last few kilometers.

Finally, I saw the 20km marker and then caught a glimpse of the finish line. Again, the cheering spectators made a big impact in my ability to get through that final 1.1km.  I managed to finish the race with a time of 2:24, which is not even close to a personal best, but I had a great time anyway. The ride back to Toronto was a lot of fun, and we girls chatted about how well everyone did and how we are looking forward to our next races/events.  Overall, I would love to run Chilly again with my Running Free peeps and my fabulous running friends (yay R.I.O.T Club!), and would recommend it to anyone.

PS: The New Balance long sleeve shirt was really nice – it’s something that I will certainly get a lot of use out of. I also have to say that the medal is one of the coolest ones I’ve ever received. As soon as I got home, my children asked to “borrow” it for a while, and were really hesitant to return it to me!