This spring after a couple of trail runs with my venerable hydration belt, with its 4 bottles and little pouch, I started to wonder what might be out there to replace it. The next time I wandered into my local Running Free store, I wandered out with a new Nathan Trail Mix Plus.

It looked like a good replacement for my current belt but; as always, you never know if you have a winner until you put it into use! The first thing I noticed was that I did not appear to be losing too much liquid capacity by switching from a four bottle belt to a two bottle belt. The new bottles were 9 oz each which made them 50% larger than the old ones! I had to admit that the larger bottles felt much more comfortable in my large man hands and I found it a lot easier to mix my energy drink as I could now just divide up one scoop of drink mix among two bottles instead of four. As I screwed on the tops, I noted how much beefier the tops were on these bottles! The plastic of the screw tops felt much thicker and the pop top was made of rubber instead of plastic. Cool! Too bad those bottles were so hard to wrestle into their funky looking holsters with a hard plastic outer part and standard stretchy fabric inner part. Getting the bottles into the full fabric belt loops, was much easier, when I was getting the old belt ready at home. After getting the bottles loaded up, I started loading up the big pocket, which was strategically placed in the center of the belt, where it would lie perfectly balanced in the small of my back. I was surprised to see just how big that pocket was! My Iphone 5; complete with an enormous Stanley case, fit into that pocket. Even with that bulky phone zipped into the main pocket, there was still room in the smaller velcro pouch for a small key chain and a few energy gels. This belt was loaded up and looking good! Time to go for a run. 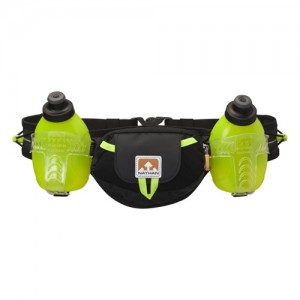 As I began that first break in run, I was overjoyed to note that there was no bouncing, even with all of that weight in it. My biggest pet peeve with the old hydration belt was not even an issue in this new piece of equipment.  As I began my jog, my keys started to jingle away and I despaired that the belt appeared to have not solved my second biggest pet peeve with the old belt. I grudgingly stopped running, and started to fiddling with the belt in hopes of shuffling some things around and stop the jingly key problem. That’s when I noticed my third pocket, tucked inside the main pocket. I dropped the keys into the small pocket, closed up the little velcro tab and started running again with my keys snuggled tightly into the little pocket. I ran off feeling confident that I had made a good call;  buying this new belt, even though the bottle pouches were a little strange. It wasn’t until I actually pulled out one of the bottles that I noticed the well thought out engineering of the bottle pouches. Those solid plastic exterior halves, formed excellent slider plates, as I re holstered the bottle. Instead of breaking my stride and wrestling the the bottle into a stretchy pouch; which never seemed to stretch the right way when you were struggling to put the bottle back in, the plates provided just the right amount of solid resistance as I slid the bottle along the plate and into the pouch.

Check out more on the Nathan Trail Mix Plus here

View all posts by Chris Vajda →