The community supports this event like few communities do. Road closures of major thoroughfares are no problem. A well-marked and well-marshalled course is routine. There is a well-supported team division with loads of community participation.The Lindsay Recreation Complex gives full use of its site, including well staffed same-day kit pickup. Sponsors are plentiful. In addition to Running Free and a dozen others, things get real with the spreads from sponsors Kawartha Dairy and Kawartha Wholesale Bakery. All-you-can-eat ice cream from the former is an annual highlight for me after running in the July heat.

This is not a particularly quick course but it is representative of a fair out-and-back course. It is the July heat that is a limiter. Aside from the heat, there is nothing to slow you down – roads are wide, cars are kept off the course, course signage is consistent, aid stations are evenly spaced and match the map, pacers are there as needed and runners are well-educated. All seem to be well-seeded at the start line and few run more than one or two wide in-race.

There always seems to be a unique aspect or two from the organizers – sometimes bands, cold towels at the finish on particularly hot days, the addition of pacers in 2015, this year saw a great colourful medal featuring a cow bell:

Also, there was a tease on a few signs at the AM kit pickup that hinted at something new. And it was confirmed by the Race Director post-race. The 39th Milk Run will feature the KL21, a southbound point-to-point half marathon ending at the same spot and approximate time as the 5K and 10K races.

With the execution of this race over the last decade, the inaugural KL21 is a must-do in 2017. 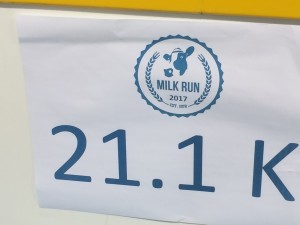