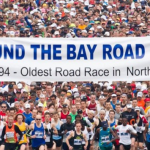 My second race this season was the Around the Bay 30K Road Race, the oldest road race in North America.  This was my second time doing the race, which has grown in numbers every year.

The first 10K of the race was through the Hamilton downtown and then out into a more industrial area as we headed towards Lake Ontario.  There was a pretty stiff headwind all through this section and that knocked my pace down a wee bit. I came through the first 5K in just under 30 minutes, and felt like I had saved a bit of time for the rolling hills in the second half of the race.

The hilly section of the race makes up the “meat” of the course.  It starts out easy enough with some gentle rollers and builds up to a few really tough hills.  This included, after a two year hiatus due to construction, the infamous Valley Inn Road Hill. The hill extends approximately 400m and comes at a particularly tough section of the race. Placed at the 26km mark, it brings you to the Hamilton Cemetery not far from the top.  Tim the Grim, a regular at Around the Bay in Hamilton, was there to offer high fives and some words of “encouragement”.

The final is mostly downhill, and I was able to hammer it home while I made my way towards the finish inside FirstOntario Place in Hamilton’s downtown. As we neared the finish, there were cheers from the spectators and we made the turn into the arena to the finish.  I was really happy when I crossed the finish line with an official time of 3:06:24 – two minutes faster than my last years’ time (even with the hill)!

Why is this race tough?

So why did I do it? Because there is just something about the Bay race.  The training can be hard, and the weather can be totally unpredictable, but there is no feeling quite like crossing the line in the stadium and getting your medal!