This race has always been on my radar, but never committed to it before. I have always known that I wanted to do it some day, but always suspected that it would just be a bucket list item and not a regular race that I would want to do year after year. It is an iconic race, the oldest one in North-America.

I have to say that I was right in thinking that I would probably only do it once and never again. There are a few reasons for that. For one, elevation is not my friend, and this race is tricky when it comes to elevation. Second, most years the weather is just a little bit too cold for my liking. Third, and that is unfortunate, I was negatively surprised about one aspect of the organization.

Let’s go one by one. Elevation. It is tough. Not super-tough and if you know what to expect, it is manageable, but still not easy. I don’t like hills to begin with. It starts with 3km of downhill which I’m not a fan of at the beginning of a race. I find that it surprisingly takes a lot out of me. I do get the speed, but it is harder than if it was later in the race. Then the next 17km has rolling hills, which is ok, but not flat by any means. 20-26km part has the hills, and if you knew what you were getting into, then you saved most of your energy for this part. Then the last 4km is more or less downhill so if you have anything left, you can just let yourself go. 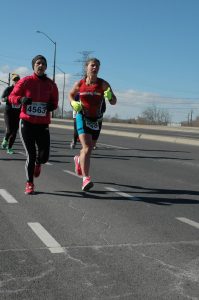 The weather. This year it was almost perfect for me. I like 0-5 C for my races. It was about -4 with the windchill, so on the cooler side. Still shorts and tank top for me, but I made the mistake of throwing my gloves away too early. Then we hit the bridge to Burlington where the wind was much heavier and I was freezing. Luckily, I found on the side of the road someone else’s thrown away nice neon Asics gloves – pretty much brand new (like mine were, but mine were dollar store ones), obviously belonged to a male as they were 4 sizes too big on me. They did the job though, and got thrown away once we hit the hills.

The website says, and that is what the lady at the information booth told me too (who was btw not too nice and didn’t have much idea about running a race), that the water stations are approximately every 5kms. For one thing, “approximately” is not good enough. For another, they were nowhere remotely every 5kms.

For those who are not familiar with running a race without carrying water, here is the deal: you have a nutrition plan. I take gels. Gels need water. Different gels need different amounts of water to become isotonic. If you don’t take the right amount of water with your gel, it will not only not help you finish your race, you will be lucky to finish at all. My gels need 200ml water minimum. So I need a water station to take my gels. Gels also work best when you “sip” them. That is, you take a little sip, you mix it with your saliva, you swallow. Do this a whole bunch of times until it is gone. I need about 500m to comfortably sip my gel. So I need to know exactly where that water station is (which most races will tell you), start sipping 500m before, and then when I’m done, water, great, go.

Not only the water stations were not every 5kms, but they were simply all over the place. The first one took me by complete surprise before 4km. So when I realized, “gosh, there is a water station here”, I had to take my gel in 2 seconds because I needed to grab 2-4 little cups of water to go with it. Then the next station was at 7km. It was actually better that they were closer together, because my nutrition plan called for 3 gels per hour, but it was horrible that they just showed up randomly when you didn’t expect them.

After the first few stations, I realized that you can see the white tent from a distance and then you can anticipate the station coming, however, you simply can’t afford to take the gel, until you are 100% certain that there will be a station there, otherwise you can mess up your whole race and risk not finishing it. That white tent could be for something else, a band playing music to entertain, a promotion of a company, etc. And the sign that they put out for the water stations was maybe 20m before the actual station. Not very helpful at all…

I was just wondering what more serious runners must feel like when they first run this race. I am just a hobby athlete, but for people who are let’s say still only age groupers but take it much more seriously, this must be horrible. The organizers must have had feedback about this a million times… I can’t imagine them not being aware of how big a deal this is. 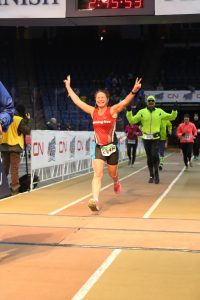 So this part was a complete disaster. It threw me off and partially for this reason, partially because of my own fault (I didn’t warm up at all – lesson learned), I really didn’t do as well as I had expected. I’m not necessarily talking about achieving a specific finish time (I missed that too), but more about feeling like I did everything I could and it was the best that I was capable of that day. I didn’t have that feeling after this race.

To say something nice about the race, the finish was fun and I really liked it that once you crossed the finish line, you were in the warm arena and not freezing somewhere outdoors. It was also great to see a lot of other Team Running Free members on the course. Well done, all!

So for me, this was a one off. It was all right, I did it, and will probably never do it again.

View all posts by Viktoria Brown →