First of all, thank you to Team Running Free for allowing me the opportunity to participate in this amazing event through the team lottery.  It was an amazing experience, and a race that I will return to again with my team, we are already in the planning stages 363 days aways from next years race!

The race is a 14 stage relay that can be done with teams of 2-15 people depending on how many stages each person wants to do.  It starts out in Gores Landing on Rice Lake which is in between Peterborough and Coburg and finishes at Seneca College King Campus in King City, 160 kilometres of racing in total.  The stages are a combination of canoeing, mountain biking/cyclocross, and running, with the distances being between 6 and 19 kilometres each.  The beginning stages are very sandy and as you work your way west they become more hard packed and feature more roads, both gravel and pavement.

The registration for the race is done at each stage.  Before someone enters the course they are required to read the waiver and sign in.  The numerous volunteers make this very easy, and are always there to point you in the right direction.

For the elite division racers when they get to each stage, with the exception of the canoeing stage, they are require to tag the hand of the next athlete taking the course.  The recreational division racers are able to wait and talk to their teammates, should they choose to, and then are sent out by the volunteers.  At some of the stages near the beginning the volunteers asked the recreational teams to wait a minute or two so they could ensure they were marking down the right times and right teams.  With 30 teams competing that was not an easy job for them.

Recap on our team:

Our team consisted of 8 members completing the various stages.  One of the most interesting parts for me was working through the planning stages with another member of the team on how to get people to where they needed to be.

The morning of the race five members of our team showed up at the marina we had rented a canoe from, or thought we had rented a canoe from, and found out the property had been sold and no longer had canoes for rent.  We scrambled and were able to rent a canoe from a small resort around the corner from the start.  For anyone that thinks a canoe doesn’t matter, well it does.  The morning brought us phenomenal weather to be out on the lake and we were excited.  We started off in the first wave and within the first kilometre of the race the second wave of recreational teams were passing us, and then the elite teams passed us as if we were just floating in the lake.  Lo and behold we exited the lake tied for last with another team from our heat that was having as much difficulty as we were out there.

The stage starts out in the small town of Bewdley and heads into the Ganaraska Forest.  The biker from our team said that some parts of this stage felt like he was riding on a beach by the ocean.  It had lots of hills and soft sand.  When our biker came in our team had now moved up to be the 8th recreational team in out of 20

This was the first running stage and it consisted of multi use trails that were wide enough for the atvs, dirt bikes, and horses, and then some single track near the end.  During this stage there was poison ivy near the edge of the trail in some parts.  The organizers of the race let us know the day before and recommended that the athletes doing this stage wear either long pants or compression socks.  I made it out of this stage without any poison ivy, so I consider it a success.

This stage can be a little difficult to get into as the parking lot is a one lane first road that the volunteers have to “police” and direct traffic in and out.  I did not run the leg but was told that it was similar to the previous stage with some wide trail and then some more technical single track trails.  The highlight for our runner was going under highway 115 through a pedestrian tunnel that had LED lights guiding the way. Poison Ivy was also seen on this stage, but our team did not come in contact with it.

When I arrived at this stage I talked with one of the volunteers about the course and how the other legs had been going.  He told me that this stage was going to be much faster than my previous one and there was a long stretch of road.  With this little bit of knowledge off I went to change from my trail shoes to road running shoes, and I didn’t regret that decision.  The stage has a lot of crushed gravel along with the road portion, and some hard packed dirt with a bit of roots.

This stage starts off with a large hill up into the forest, our rider took off leaving behind a trail of dust and she was out of sight.  The report back was that this section was similar to the first biking stage, where it paid off to have the proper mountain bike to be prepared for this section.

The middle of this stage featured a lot more sand, so once again the comment from our biker was “thankfully I had my mountain bike for this stage.” He was pleased with his choice of equipment and at this point our bikers had come to the realization that the time we gave up in the canoe was made up and were were in the top 3 of the recreational division.

This was the first stage that on the official race guide they list it as a Mountain/ Hybrid Bike Stage.  Our team member chose to stick with his mountain bike and was questioning his decision as he was out on the course.  However, he came flying down the hill to the end of the segment kicking up a huge trail of dust and absolutely exhausted.  Needless to say I think with a cyclocross bike he may have had one of the fastest times ever on that segment, still had the top time for the day.

This stage was a lot single track featuring roots on the ground, but our team member didn’t report back much sand.  She said it felt like a lot of the sections were downhill and she was happy to be running west!

A tip for this stage is don’t forget anything you need in your car.  It is about 500 metres from the parking to the actual checkpoint, not a huge distance if you are a recreational team, but for the elites they could run into trouble.  The start of this stage heads deep into the forest, and there are a few turns near the start to look out for. On this stage we had a bit of a navigational error which lead to an extra 2 km of running by our team member.  She managed to make it out of this stage a little discouraged, but nonetheless our team was happy she made it out safe and sound.

The stage featured some road riding before dipping off into the forest and making your way into the Hollidge Tract.  This stage also appeared to be a bit difficult to navigate as well, as one team came in from the wrong direction and our team had to back track slightly with another team slightly.  We even had a “home field” advantage as our rider lives around the corner from the course so he was able to find the right entry and help the other team at the same time. I think the great sportsmanship ended up paying off for our team in the end.

This stage starts with an uphill from the checkpoint and into the forest, the hard part of this stage is going across Hwy 48, so do so carefully!  The trail is predominantly wide open, but there are plenty of different crossings, so make sure to pay attention the the signs on the trees.  Our runner was experienced on this trail so he made it through without a problem.

Our cyclist decided to bring her road bike for this section as it is 13 km on paved roads and the final portion is 2 km through a forest trail that she was able to navigate with ease.  The road bike was the right choice and she flew to the next checkpoint.  At this stage if you get stuck at Vandorf Sideroad and Bayview it is worth it to get off your bike and press the walk sign, as the light is weight censored to change.

This stage features a lot of road running and involves crossing two major streets, Yonge St and Bathurst St.  Once crossing Bathurst the stage features a few steep inclines that really challenge the best of runners.  Once of the road there is about 2.5 kms of trail running before making your way through the winding path to the finish line.

The finish line area had plenty of volunteers and light refreshments to snack on after a long day of racing.  Our team stayed around for a while and it was confirmed that we had won the Recreational Division, with a time of 10 hours and 16 minutes, which topped off such an awesome day of racing.

With this race being a huge fundraiser for the Oak Ridges Trail Association it is such an important part of their year.  The race crew updates the timing pages as they go along, so for the most part you aren’t 100% sure where you stand in the recreational division, as only the stages are timed, and not transitions.  It could not have been possible without all of the volunteers.  I can’t confirm the amount but I would estimate that the race had at least 200 – 250 volunteers spread out over the 160kms ensuring that everyone had all of the information they needed at each stage.  Another thing to add is that our team was lucky to finish in the daylight, but for those teams that were still out on the course around sunset or later, headlamps and red lights for the back were required by athletes. 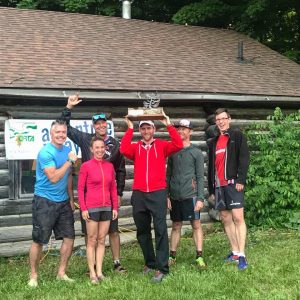 View all posts by Michael Morrison →