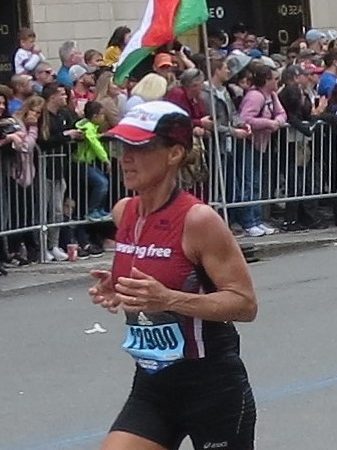 Imagine 30 000 people running through the streets of Boston together, being cheered on by friends, family, and random strangers. It was absolutely epic! Even the weather during the race cooperated on this magical day (although the rain and wind before and after the race were terrible!). The mass of bodies streamed through the street as one, and I stayed to the side as much as I could. I high fived several kids, teenagers, and adults, and also a dog and someone in a Hulk costume. I couldn’t reach Santa though! I managed to Power Up four or five times (those are my favourite signs!), and seized a piece of red licorice offered by one of the spectators. I passed on the beer, oranges, and freezies, but was grateful for an extra water and some ice from some others on the side line.

The course was just as hard (if not harder) as I had been told. I had told myself to break the race into 8 manageable sections of 5.5 km (knowing that I had to aim long for the last section which feels like it is 10 km long).

The first 10 km was indeed downhill, and I was able to hold 5:03 or less (when I saw my 5th km was 4:45, I swore out loud), as expected. What I didn’t expect was how sore my quads would be after 10 km. I ran through the pain, telling myself that I had strong quads from all of my cycling, and that everyone else must be in worse pain. The sun peeked out, and it got pretty hot and humid, so I changed my hydration plan and started taking 2-3 drinks at each aid station. I was passing people at a pretty steady rate pretty much the whole race, and some were passing me as well.

I could tell I was ahead of plan at the half (1:48 vs 1:52), and tried to ease up. I knew the hills would start at the 25 km mark, and would last almost 10 km. I was still passing people, even on the hills, which are not usually my strength.

At the top of the 4th hill, a male runner wearing an Aggies hat asked if that was Heartbreak Hill, and we were both surprised and disappointed to learn that it was still ahead. And sure enough, at 32 km, we started up Heartbreak Hill. Many runners were walking by this point, and several had made their way to one of the many medical tents, clearly in pain. I was grateful that there were so many volunteers helping those in distress, and made a point to keep hydrating and eating shot bloks and gels to try to avoid running out of steam. After 500 m, I asked a spectator if we were at the top, and she said not yet. Ugh – still climbing around the corner, but then at last! We had made it past the hardest part of the run – or so I thought!

I had read a report by a runner that they did not enjoy running the last 7-8 km downhill because their legs were shot, and I remember thinking he was crazy – I love running downhill and letting gravity do most of the work. Boy, did I change my tune as we started running downhill yet again. My quads were on fire, and I found myself wishing the downhill would stop already! There were a couple slight rises which I was grateful for, only to have to run downhill some more a minute later. I started to wonder about my ability to finish strong at the 39 km mark – I was very tempted to walk like many around me. The guy in the Aggies hat appeared again beside me, and I tried to stay with him to urge myself along. He drew a number of “Go Aggies” chants, and I was drawing energy from the fans with a few high fives (although one keen teenager almost spun me around and backwards with his emphatic high five). Apparently I ran past Mike at this point, but I didn’t see him – I feel sad and guilty about missing him, but he said he could tell I was focussed on getting to the finish line. I did notice the Citgo gas station sign, and I knew I was close when we turned right and then left on Boylston, but that last 600 metres (or less??) seemed to last forever. I heard a male announcer call my name (not pronounced perfectly, but good enough) along with others running near me. I think I was ahead of the Aggies runner, but not positive. I staggered across the finish line, and remembered to stop my watch. My official time was 3:41:55 – 9 minutes faster than my qualifying time! I was thrilled with my performance, and it really was an amazing experience from start to finish.

A huge thank you to all of my supporters: family, friends, co-workers, and choir members, especially my husband Mike and Team Running Free Members Adrienne and Tracy. I was so inspired by the blind athletes and those running with prosthetic limbs (and others with stories that weren’t visible) running this challenging course. I am grateful to the volunteers and the spectators for the hours they spent supporting the runners – we couldn’t have done this race without them!

View all posts by Robyn Toffolo →