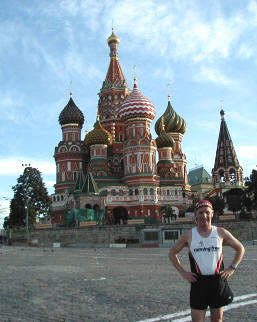 The past few years has seen my business travel increase and take me to many interesting locations. While training for marathons and now Ironman competitions I need to keep my activity level up on these excursions. To date I have been successful in this regard, especially when it comes to running. My last three marathons have seen me do my long runs in London, Tokyo and Moscow. I have done training runs in Paris, Oslo, Anchorage, San Paulo, Santiago, Bangalore and Reykjavik just to name a few.

Perhaps one of the most inspiring runs was my first trip to Moscow about a year and half ago. Having traveled to Moscow for the first time I didn’t know what to expect: the wild and woolly west, mobsters, danger lurking on every corner…as it turned out not much of that at all, well for the most part. I arrived at my hotel late in the afternoon just before dark and was able to see the Kremlin and all its surroundings. It was amazing. After growing up in an era when Red Square was synonymous for May Day Military parades, bushy eyed Bolsheviks and the evil Russian Empire I was about to step foot into this center of history.

Having talked to some locals I decided that it was best to go out early for my run, 5:30 and run along the Moscow River which the Kremlin overlooks. Still not sure what I was up against I asked one of my colleagues if this was safe. His only comment was at 5:30 in the morning in Moscow; nobody is up, good guys or bad guys alike. I left my hotel and ran across the bridge which lies to the entrance to Red Square, where the picture is taken. I turned onto the main street, which was empty and ran along a wide walk way along the Moscow River. My first amazement was that the street had just been washed down and was cleaner than anything I had run on before. I ran out along the river for about 30 min. and then turned back. It was actually a drizzly, foggy morning and the visibility was not that good. I headed back to the Kremlin area and decided I must run into Red Square and see what it was all about. I must admit it was somewhat exciting venturing in; the historical significance, the size and emptiness of the area and the weather…well I was starting to look for KGB agents skulking behind the walls. This actually was not too far from the truth. You see the place was empty, the visibility was down to about 100m and as I got further in, I kept on seeing more and more guards, armed with very automatic weapons looking at me with more and more intent. I decided perhaps I had gone to far and should exit, seeing I did not really know where I was going and ran back to my hotel. Later that day I relayed this experience to of my Russian colleagues later that day and agreed I had made the right decision to leave

I found myself in Moscow over the weekend, three weeks out from the New York marathon and thus it was the time for my final long run. I headed out on a Sunday morning and made my way to the infamous Gorky Park that was not far away. A fall day, early in the morning, there was only myself and a few local joggers in the park. I was enjoying the run and had just passed an older local runner when I came upon one of the many bridges that is along the route, which cross the Moscow River, when my most dreaded fear of any run was realized: wild dogs, a small pack of mangy German Shepard’s! They were off in the bush about 300m in front of me and they were barking loudly and heading my way. I stop for a minute then turned around and slowly ran back to a meet up with the runner I had just past. His English was as good as my Russian which was almost non-existant – I pointed to the dogs and said “dogs”, he nodded said something then directed me of the pathway. We walked a short way off the path , stopped and he picked up a long narrow stick, broke it off at what seemed a specific length, handed it to me, then broke another one for himself.

I looked at these sticks and couldn’t figure out what we were going to do with them. If the dogs attacked and you actually hit them with the stick it would break and do absolutely no good. You could wave it at them which does work 99% of the time, unfortunately I have been “on the other end of the stick” that 1% of the time and didn’t what to go through that again. I couldn’t figure it out, he was explaining to me, I think but I couldn’t understand a word. Then it dawned on me what I was going to do.

When the dogs came at us I would through the stick the other way, they would go fetch it, me being faster than my fellow runner would run in the other direction and when the dogs came back….. well maybe not very sportsman like… anyways the dogs did not come down to us, we passed them , I thanked the gentleman in Russian “spasiba” and carried on the rest of the run without further ado.

I took the above picture last week on June 22, actually a fellow runner, an Italian I think, took it for me. It can been very inspiring when think about the history that this area you are running through has, from hundreds of years of Czarist Russia to 70 years of communist rule to the recent turbulent past is symbolized in this picture. Two days after this I was in Kiev, Ukraine, running through Independence Square, scene of the Orange revolt six months earlier. One day it is headlines in the press, the next day you are running through it. Traveling on business to these locations does not give you much time to sight see, but an early morning run can provide with a perspective on a location you may never get otherwise.