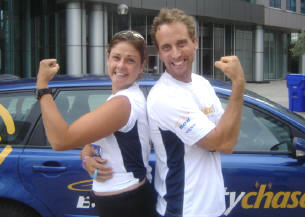 The Bell City chase is a one day event where teams of two race around the city finding clues and accomplishing a required number of tasks in an urban obstacle course/scavenger hunt. This year I took part in the August stop in Toronto. There were over 400 teams in the event. If you have ever watched “The Amazing Race”, this is like that all in one day.

My partner-in-crime and I, Team RiffRaff, started the day around 7 am. We drove down and found parking right across from Metro Hall where the Bell City Chase was being hosted. After visiting the washroom and the Second Cup on the corner, we headed over to pick up our race kits and check in. After digging through our swag, we changed into our race shirts (required) and got ourselves psyched for the event. It was really great to watch the other teams come into the square. There were all types of people: young, old, really fit looking, not-so fit looking and those that looked like they normally wouldn’t be out of bed at this time of day. At times, we passed the time chatting with other teams about who they were and what brought them out to do this event.

The race started at 10 am. After a short warm-up, the host came on and introduced the sponsors of the event and gave the final instructions for the race. He also gave some history of the event and words of encouragement. Everyone took furious notes because some of the things that were said were actually clues for the race.

Soon enough we were on our way and told to go pick up our clue sheets at Union Station. It was quite a site to see a herd of participants filing down Wellington towards Union. There are some great shots on the website of the migration. We got our clue sheets, and with our TTC passes in hand, we piled onto the subway to head north to find our first task. We were given a list of over 20 choices of tasks in various cryptic locations around the city. We were required to decipher the clues and complete 10 tasks, then get back to the finish in under 6 hours. The tasks that we tackled included: sawing logs, racing around a “race track” on a child’s race car, Blind croquet in High Park, panhandling for Children’s Wish as a Squeegy-kid, learning to Fence, and many others. When we reached the finish line, we debated about going back out and doing a few more tasks for fun, we didn’t want it to end. Then when we cheered our friends over the finish, it was almost as fun hearing what other teams did for their tasks as doing the tasks themselves. The whole day came to a end with an amazing after party and awards/slideshow of the day’s events (also there was free beer).

A special thanks to Team Running Free for their sponsorship of Team RiffRaff in this great event.

The name RiffRaff comes from the running support group that I belong to. We call ourselves RiffRaff Running. There were two other teams from our group taking part in TBCC, I would highly recommend doing the City Chase with as many friends as you can muster. It is truly an event open to all levels of ability and enthusiasm. It is really something that you would want to share with others. Cheers!

View all posts by Ken Niemimaa →