I’ve always wanted to race in the desert, so when I heard about the Javelina Jundred 100 miler, I was excited to try it out.  The course is a 15.3 mile loop (6 times in alternating directions) plus a short 9 mile section at the end, and is run on rolling single track on the Pemberton Trail in McDowell Mountain Park, Arizona.

Four of us went down to Arizona for the race, Ron Gehl and myself were running, and Paul and Barbara were crewing and pacing.  Paul and I flew into Phoenix on the Wednesday before the race, and were met at the airport by Ron and Barbara who had driven down.  We set out early in the morning on Thursday to hike the 15.3 mile loop in the “out direction”.  There were some sandy sections at the beginning of the loop, followed by some technical rocky sections as we headed towards the mountains, to about the 10.5 mile mark.  The last 5 miles of the “out” loop was mostly sand, and relatively flat and slightly downhill.  The weather was beautiful, around 90 Fahrenheit.  It took us about 6 hours to leisurely hike the loop, while stopping to take pictures and enjoy the scenery.

There was a pre-race meeting on Friday afternoon when competitors picked up their race packets, and we were briefed on details about the race.  The Javelina Jundred has quite a low finishing rate (usually around 50%)  largely attributed to the desert conditions, mainly high temperatures, and runners going out to hard and crashing and burning.  One unique thing about this race is that the theme is a Halloween party.  So on race day, there were runners dressed up in costumes, which was really cool.  There was a guy dressed up as the Grim Reaper (his name was actually Paul Grimm), another runner was Wonder Woman.  Kudos to Paul who ran most of the race in the desert in that costume! 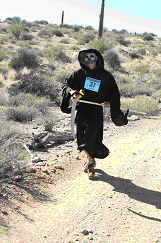 Paul Grimm on the course

Race morning was great, and we all set off on the course at 6am.  Ron and my self ran together, back and forth for most of the first loop, and I finished the loop in 2.5 hours.  I was surprised to have completed it so quickly, and decided to slow down a bit as the day was already getting hotter and I didn’t want to be one of those runners in the “crash and burn” category.  We set out on the second loop, had a great time, and I was passed by the eventual woman’s winner near the end of the loop.  I ran in to finish the second loop (~30.6 miles) in 5 hours 20 minutes. 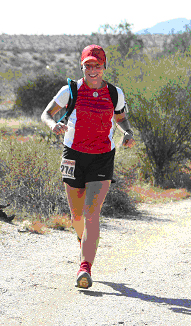 Char near the end of the 2nd loop
Ran the 3rd and 4th loops largely by myself, meeting up with other runners occasionally, and Ron and I had split up by then.  It was so much fun out on the trails, meeting other runners and enjoying the adventure.  I arrived at the start/finish at the end of the 4th loop, and picked up my pacer, Paul.  I was experiencing a bit of nausea and took a gravol.  The fifth loop went well, and it was nice to have Paul out on the course with me.  The aid stations had some great food and I had chicken broth which helped the nausea, and at the end of the 5th loop I had an amazing hot dog which hit the spot.  Shortly after starting the 6th loop, around 125km into the race, I unfortunately kicked a pile of rocks and dislodged my big toe nail on my left foot.  It was horribly painful, and I was reduced to something resembling a hobble/shuffle.  I did this until we reached the first aid station when Paul was able to work on my toe and tape it down the best he could.  I was able to move slightly better after this, but very slowly, and continued the hobble for most of the rest of the race.  It was a bit frustrating because my legs felt good, but we still had a good time on the course, joking about the predicament I was in.  At this point I wasn’t sure where Ron was, but I hoped that he was getting through the race ok.  We headed out on the last 9 mile loop, and I was in a bit of a daze.  This was the first time that I had ever experienced vivid hallucinations.  I was moving slowly, to me it felt like a snail pace, and saw upside down tables and chairs on the side of the trail.  As I got closer all the tables and chairs turned into cactus.   I also remember seeing a flying saucer hovering above a runner who was coming towards me (finishing their 6th loop), and I laughed afterwards as I thought jokingly “beam me up Scotty”.  We hit the 5.5 mile aid station, at which point the sun was beginning to come up, and we were to run the last 4 miles into the finish on a different trail.  At this point I had snapped out of my haze and thought of John Yip’s famous words “suck it up buttercup” and decided to run the last 4 miles into the finish.  I was able to do this, although it wasn’t a sprint by any means.  I completed the race in 25 hours 25 minutes, 24th out of 117.  Unfortunately, I found Ron at the start/finish area, as he had been extremely ill and had to drop from the race.  It was great to stick around afterwards and watch all the runners cross the finish line.  That is one of my favorite parts of 100’s, seeing people laugh and some cry, the overflow of emotions as runners finish these races.

Thanks goes out to Jimmy the race director who did a great job putting on an awesome race.  All the volunteers, who were out all day and night tending to the runner’s needs, they were awesome!  To Paul, Barbara, and Ron for a fun run, for their support, and for crewing and pacing.  Also thanks to Will Lafollette who took amazing pictures all weekend (all 3 photos are courtesy of Will).

As a side note, two days after the 100 miler we drove to the Grand Canyon where Ron, Paul, and I double crossed the Canyon from South-North-South Rim.  We ran and hiked approximately 43 miles on rugged canyon trails and finished the double crossing in 19 hours.  It was an amazing adventure!

View all posts by Charlotte Vasarhelyi →