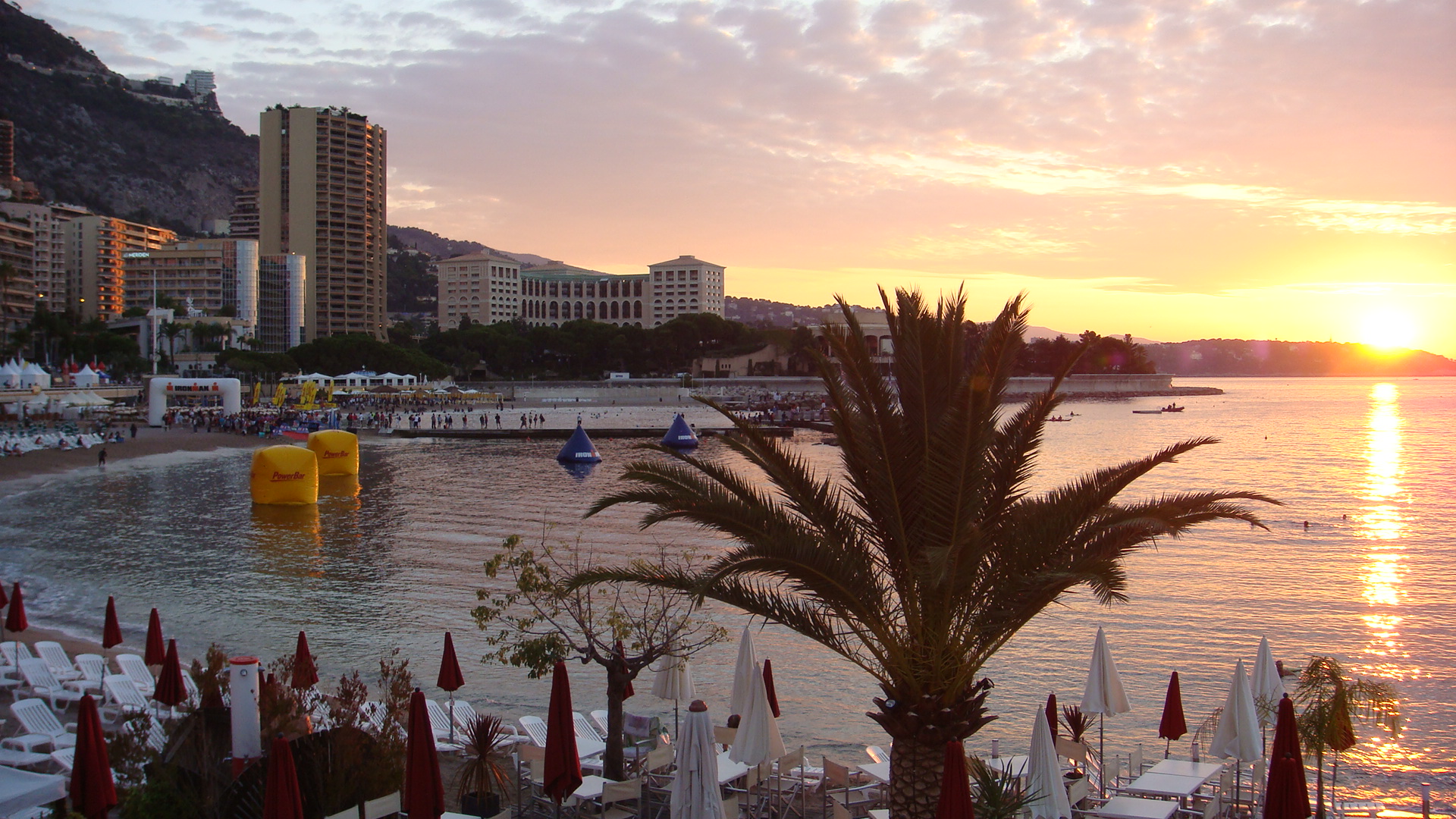 If you are seeking a challenging 70.3 Series course Monaco is it. Most of the challenge comes from the bike course which includes 1500m of ascent, the same as IMC.Last year, one of our group from the Aurora Ducks Master Swim/Triathlon Team (with Running Free as one of our sponsors) decided this would be a good race to do. So Brian, Spencer, David, Mike, John, Robbie and two ex members who now live in Europe, Mark and Greg together with myself decided to sign up. We also brought our fan club, Kelly, Simone, Cathy, Mary Beth, Elizabeth, Grace and Lois to cheer us on. The course was all it was made up to be and more. Monaco is a Principality located on the French Riviera about 11 km from Italy. It is 4 km long and 800m deep, hence most of the ride course was in France. It is built vertically with unbelievable switchbacks for cars and bikes and stairs and elevators for walking.We all assembled in Monaco (actually our hotel was in France about one block from Monaco) on the Thursday before the race and spent the next three days getting acclimatizing, swimming in the Mediterranean Sea. The day before the race Saturday we had the opportunity to drive the bike course. We were totally intimidated; 90k , 1500m of vertical. three major climbs and no real down hills you could take advantage of! 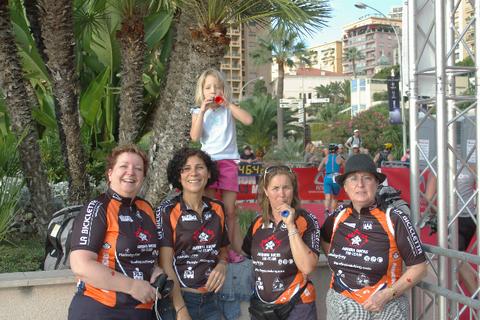 The race was scheduled to start on Sunday (Sept 2) at 7:00 am. The start was delayed by 20 min as several of the pros, including Chris McCormack, scrambled to get replacement bikes. It seemed that 12 bikes had been stolen out of transition over night as we had to rack on the Saturday. Anyways at 7:20 the swim commenced with a double loop on the main beach area in Monaco. The water was about 22C and calm, a very pleasant start to what was going to be a hard day.When you came out of the water you ran into a transition tent, changed then ran to were the bikes were racked, a long corridor with one row on each side. At the end you mounted your bike and commenced a 23.5k, 680m climb to the top of Col de Guerre. Once at the top you started an immediate descent which took you down a 600m drop through a series of switchbacks and hairpin turns were you could never get your speed up. One of our group managed to hit a small, meter high embankment wall on the second corner and went straight over and down about 5 meters. He did manage to finish the race but slightly damaged.There were two more climbs on the bike which took you through a number of small French villages. It was a spectacular route, down one lane streets, through tunnels ranging from 8m to 800m in length fantastic scenery and yes, of course a few good climbs. The last 14k was down hill into town. A nice break for the biking. I figured this hilly course added over 45 min onto my normal 70.3 bike time.

Now anyone who has seen the Monaco F1 race has seen the run course because that was it. You come out of T2, and interestingly enough my running legs were in a lot better shape than I had thought after all that climbing, and onto the F1 Course. You come along the main waterfront road, through the tunnel, down by the Marina and then up the hill to the Casino. The hill is a good 800m long and you get to do it 5 times during the four and half loops of the race! There were lots of fans cheering you on as you came up the hill which was good as it was a grind, especially the fifth time! On every lap as you go by the finish, at the top of the hill behind the Casino you go through a chute and get a different coloured wrist band till you have 4 and then you get to finish. Once you go by the finish you start a short winding descent ( fun while running, a bit more trickier I am imagine in an F1 car) and then back 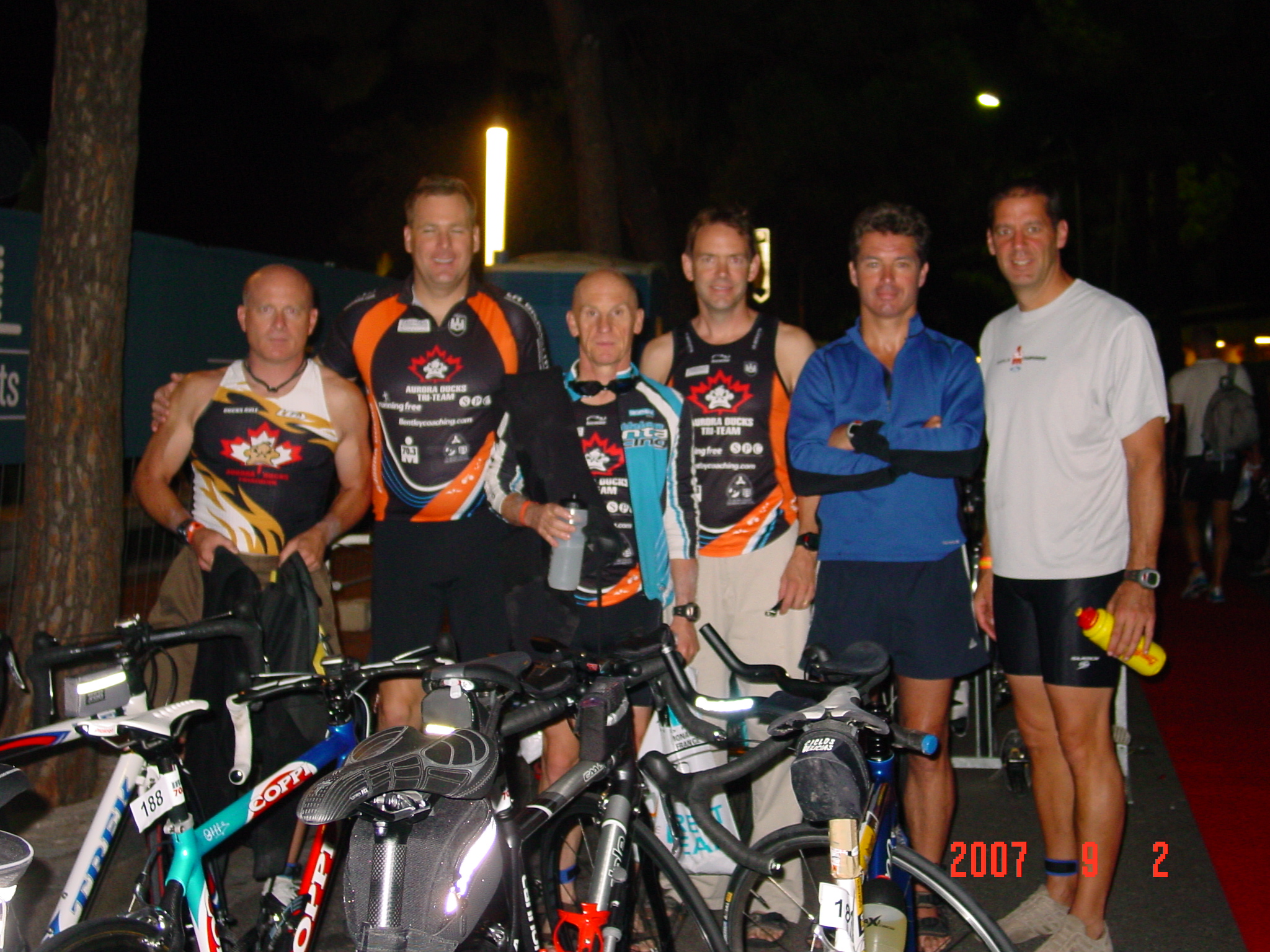 out by the transition area and start your loop again. By the last loop and fifth time up the hill I was ready for the finish, 5:56 min. My slowest half ever and over an hour more than my PB. Amazing what those hills will do to you if you are not used to them!While not a race to PB, it is probably the most challenging 70.3 out there. This is another most do race. And the post race wine is pretty good to! That all being said this was just a warm up for our next ride three days later, the triple ascent on Mt Ventoux (see the next posting)