When I started running longer distances in my CW-X Expert tights I did notice that I felt stronger and recovered more quickly. At first I’ll admit, I chalked it up to the old placebo effect. I mean how could tights make this much of a difference? I found there to be definite logic behind the original claims CW-X made in that compression did provide very specific advantages in training. Now, according to a French study¹ recently published in the 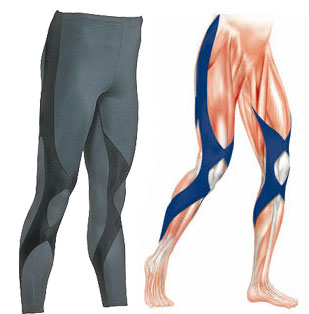 International Journal of Sports Medicine, some of those claims have been confirmed. What the study looked at doing was to compare compression tights, regular tights and regular running shorts to find out if there are benefits to any one of the choices. The study overwhelmingly pointed towards compression tights delaying muscle fatigue by applying pressure on major muscle groups. By controlling muscle movement and decreasing impact trauma to muscles, compression actually allows for maximum oxygen absorption, thus allowing you to last longer and run faster over longer distances. The author of the study, Stéphane Perrey, Ph.D., believes that wearing compression tights can trim up to 6 minutes off a 3:30:00 marathon time and that this may be due to an increase of blood circulation to the lower body. The study also pointed out that compression tights improved running technique through more consistent and improved knee alignment and function. The same principles should also apply to the CW-X tops. For a longer distance runner who may fatigue later in a run and hunch over, however slight it may be, he/ she will compromise breathing ability. The more difficult it is to breathe, the less oxygen that will get to working muscles. Your heart rate will increase and so too will the intensity making it more difficult to sustain a particular pace. The compressions found in the CW-X tops are focused around the shoulders, arms and upper back in an effort to help sustain an erect posture and clear, open breathing passage.

I have to say, I have not had anything but positive feedback on any of the CW-X products. We have had it in the shop for just over a year and have sold hundreds of pieces. In early October 2006, CW-X Canada became a Team Running Free sponsor. Part of the sponsorship was to have our athletes test out the various products and give honest, informative and useful reviews. Look for this valuable information in the gear review page of www.runningfree.com in late 2006, early 2007.

¹Study was published in the International Journal of Sports Medicine in 2006 and authored by Stéphane Perrey, Ph.D.

View all posts by Nick Capra →