A while back another one of our Team RF members (Syd Trefiak) posted an article about shifting your way to a PB (http://resources.runningfree.com/articles.php?article=shift-your-way-to-a-bike-split-pr ). I wanted to build on this article and go a step further and get into the topic of power output or effort as you are ascending or descending on the bike. I had some great experience with the merits of consistent power output in a bike leg while I was in London a couple of years ago, and just wanted to share some of my thoughts.

I used this approach in a duathlon just south of London at the end of a fairly heavy training week. My legs were not feeling fresh, and I was a bit tired, so I needed a different approach to what I would normally do, which is to focus on keeping my speed as consistent as possible.

This was a rolling hilly course for the most part, so I was able to utilize the shifting concepts as Syd discusses, however I also made a conscious attempt to keep my uphill efforts steady without increasing my wattage/ output. This was admittedly easy since my quads were extremely sore. I continued through the crest of the hills, and used the ascent to my advantage, pedaling steady the whole way.

The results. Quite good actually. Despite feeling poor that day, I ended up with a time that was not far off my PB for that distance, and only 30 seconds behind the best time for the 19km course that day.

When looking at the power output used, we can look at the diagram below. The red line represents the elevation over a given distance, with two hills. The blue line represents a theoretical power output over the range that the majority of riders would be inclined to do in order to maintain speed on an uphill. This type of approach is generally what is seen when riding in a pack , however for a time trial effort there is no peloton to rely on a constant speed and wind breakage. As you can see the output is higher during the hill ascend sections of the elevation. Now when we look at the green line, this is what I would estimate to be what my power output would ahve looked like on teh day of the duathlon I mentioend. We can see that there is a much more consistent effort, with a slight increase in effort on the hill inclines. However it would appear as a controlled effort. 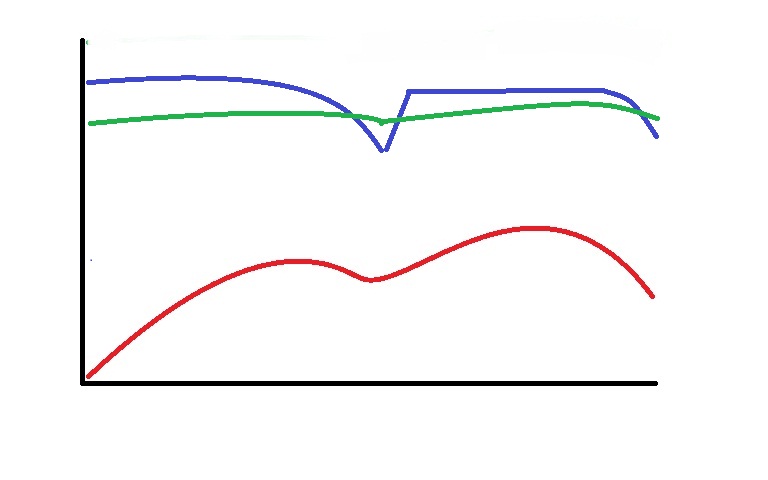 There are many studies that look at the benefits of using a consistent output. For long distance events a constant effort assists in preventing the onset of fatigue too early.  But when we look at it logically, there is a large advantage to making use of gravity while descending.  When we look at the power requirement to cycle a given speed, gravity is an extremely important factor.  I’m going to try and explain some of the science behind it here.

When we focus on the Slope% part of the formula, we can see that this is multiplied by the weight of the rider and bike, and has a heavy impact on the speed at the same power output. Conversely, the power output increases largely with the same speed.

Let’s look at an example of this. For a rider of 75kg, and a bike at an average road bike weight of about 9 kg (this gives us information regarding some assumptions about the frontal space taken by the bike and rider for wind resistance, and the thickness of tires for friction). We will also assume that there is no wind for this example in order to focus on the effect of gravity.So given these variables, to travel at 30km/h will require this rider to generate 257 watts on a flat grade. When we increase the slope to only 1% (1m of climb over 100m of distance), this increases the output power requirement to 326watts (increase of 69 watts). This is actually quite significant, and a 7% slope would require over 700 watts to maintain a 30km/h speed.When we look at the downhill side with a 1% negative slope, our power requirement drops to only 188 watts, which is 69 watts lower than on flat ground, and again, for that same 7% slope, going down would….well it doesn’t really work in the formula. We would be able to realize a speed of 50km/h given the same power output as was required for the 30km/h effort on level ground.

So overall, I hope I’ve made it easy to see how the power output difference on descent vs. an ascent can be worked to your advantage. Hopefully someone can use this approach to a successful bike split PB.

View all posts by Chris Lamont →