Last Saturday was my first “off road experience” in over 10 years and it did not disappoint.  I ran the “sport” course at the 5 Peaks Rattlesnake Point race.  I knew it was the most technical of their races so I was a bit concerned.   It was only 4.5km and I knew it started in an open field before it hit the tough stuff so I figured I’d be “safe” for long enough to get into a bit of a rhythm.

Because someone had gone around the night before and removed a bunch of the course markers, both the sport and enduro races started half an hour late and they started together.  The enduro was supposed to start 5 minutes before the sport race.  No biggie, there was Kicking Horse coffee and plenty of samples from Clif Bar to enjoy.  I saw a lot of other Team Running Free athletes and I ran into a couple of other friends that were doing the enduro course.   We then found our friend John who was also doing the sport course so we hung out in the shade until about 15 minutes before the race started.  I had started to get antsy and wanted to got over to the start line.   We had been told to self seed ourselves and that we’d be going off in waves.   I seeded myself in the second wave with the rest of the folks that could run a 5km in under 23 minutes and waited in the baking hot sun.

The gun went off and we took off across the field.  Holy smokes it was hot.  The field wasn’t too bad, not too many divots or pot holes.   I took off like a shot.  No easing into it, I just ran.  Hard.  My heart rate was pinned right away.   My breathing was ragged.   The heat wasn’t helping either.  We hit the gravel trail and made our way into the shade which offered some relief.  The trail then became dirt and started to climb a bit.  It narrowed a bit more but I was still able to pass some people.  I noticed the 1km mark and then the trail started to get really rough.  It narrowed even more and started to be peppered with tree roots and chunks of limestone.  I had to concentrate on my footing and my stride.  My mantra became Run like a Ninja, Be Light on Your Feet.  So ran like a Ninja I did.  Until I hit a hill.  It wasn’t actually a hill it was more like a rocky, root covered wall.  I tried to run up it but it became more like a scramble that was reduced to a walk as my heart was in my throat.  It was ugly. 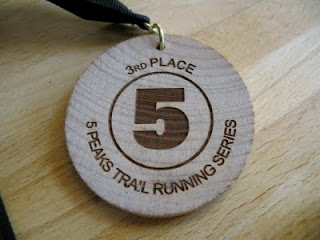 After this nasty climb, the ground seemed to level out a bit more.  I had let a couple of guys pass me on the really technical parts as I really slowed down.  There was even some walking.  But once the ground leveled out, it was game on again.  I started to pick up the pace and pick people off.  A younger girl had passed me earlier and I caught her just before we came back out into the open field.  Once I hit the field, all bets were off.  I knew I was almost home free so I was going to push for all I was worth.  I caught another guy as I rounded the bend to the finish line.   I was hurting.  Big Time.  But I was almost done.  I didn’t even see the finishing clock but I looked down at my watch and saw 21:49.  Sweet!

I wandered off to get some food and started looking around.  I didn’t see a whole lot of women.   Gary went to check the results and told me I was second in my age group and second place woman overall.   But the stats were not all in yet so we waited around to see if I’d get knocked down a few spots.  Either way, I had at least placed in my age group.   The awards ceremony started and they called the overall women winners.  I got bumped down to 3rd.  But STILL.  3rd place woman overall??  I’ll take it.

It was definitely an eye opener for me.  I run differently on the trail but I can still run fast.   It was tough but I really enjoyed it.  The focus and concentration is intense.  You have to be aware of your surroundings at all times.  I was forced to be light on my feet.  Just like a ninja.  A stealthy running ninja.

The race had great volunteers and the swag is excellent.   I’m chalking that up to great sponsors like Kicking Horse Coffee, Clif Bar, Salomon and Running Free.  I’ve never been to a race where you can roll in, set up a lawn chair and enjoy a free cup of joe while waiting for the race to start.  Talk about a nice laid back vibe!   I’ll definitely be adding a few of the 5 Peaks races to next year’s racing calendar!

View all posts by Phaedra Kennedy →