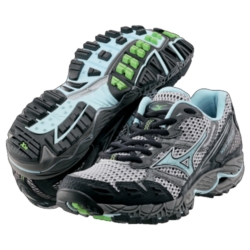 As a user of Mizuno Ascend trail shoes (owned a few pairs of Ascend 3 and 4), the arrival of the Ascend 5 was a highly anticipated moment. In transitioning from road running to trails, I found the Ascend 3s to be the best transition shoe in the process, because it fit like a road shoe but came equipped with better traction and toe protection. Two models later, I still enjoy the Ascend 5s on my trail runs and at the races. The Ascend 5 features impressive lightness and flexibility that allow some of that road speed to carry over onto the trails. These shoes never feel clunky on the trails, allowing you to develop a good “feel” for the trails while also providing added stability, confidence and protection against the rough terrain.The Ascend 5 is a very versatile trail shoe. Suitable for every type of surface from roads, gravel, hard pack, dirt, single track to mildly rocky-rooty terrain, the Ascend 5 is perfect for mixed trail events. The cushioning and the low profile make it a very comfortable ride for distances up to 100 miles on mild to moderate technical trails. The midfoot holds the foot like a glove and the generous toe box and upper allow room for the feet to swell when you’ve been pounding the trails for 100kms or more.

The mesh upper is very breathable and lightweight, making it the perfect summer trail shoe. The lightweight mesh helps the shoe drain well and dry fast after creek crossings, but I found that it offered less protection for the sides of my foot when running between rocks and roots on more aggressive technical trails. (The upper mesh on my Ascend 5s developed two rips on the two sides around the midfoot, one around the ball of the foot and the other one at the base of the pinky toe.) By comparison, the mesh upper on the Ascend 4s was a tighter weave fabric that offered slightly better protection from trail debris and was more durable than the Ascend 5s.

One upgrade that I was particularly fond of, which was made in the Ascend 4s and carried over in the Ascend 5s, was the smoother, wicking fabric used in the interior of the shoe and around the heel and ankle area. This fabric feels very comfortable when wearing thin socks in the summer minimizing the chance of developing blisters and hot spots. Another upgrade that I was very happy to see in the Ascend 5s is the wider toe box area, which made this shoe a great choice for running 100 mile trail races in.

The traction of the Ascend 5s is an excellent update from the early days of the Ascends. The lugs and the two directional treads in the heel portion make the shoe perform very well on a variety of slick trails, including on the less steep muddy downhills.

Scoring on so many fronts that are important to trail runners, the Ascend 5s are the perfect choice for a variety of terrains and distances. Highly recommended to runners transitioning from roads to less technical trails.

View all posts by Charlotte Vasarhelyi →