This past weekend my son (Team Running Free Athlete Jesse Diaz) and I took part in the ‘Don’t Get Lost’ Snowshoe Raid in Collingwood, ON. Set in the forests on the top of Blue Mountain and other ski resorts, the Raid challenges teams of 2 to locate as many checkpoints in the span of 3 hours using only a map and compass. Jesse and I competed in the Raid last year, but with an unexpected lengthy road section on the course we misjudged our finishing time and were penalized so many points that our team came second last (despite finding a healthy number of checkpoints along the way). This year we were determined to race smarter to prevent the large penalty we incurred last time we attempted this event! 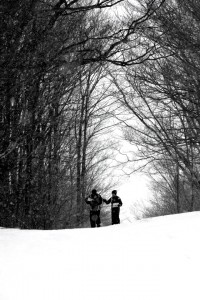 With temperatures above OC last year, competitors did not need snowshoes to compete in the Raid. This year, there was no such problem, as temperatures of -3C, coupled with a hard layer of snow topped with fresh powder, greeted racers on race day. We had to deal with a persistent and frigid wind on exposed areas of the course, but thankfully we were often shielded from the winds by the hills and valleys of the Blue Mountains. The snow brought another challenge for Jesse and I: we will admit that we are still newbies to trail and adventure running, and this would mark the first time either of us have ever ran in snowshoes! Despite our goal of finishing a bit more respectably than last year, I was a bit unsure as to how this extra weight on our feet would impact our running. I was pleasantly surprised! Sure, the running was slower overall compared to last year, but the snowshoes made climbing the snowy peaks much easier, and they were a bit more intuitive to run in than I expected. 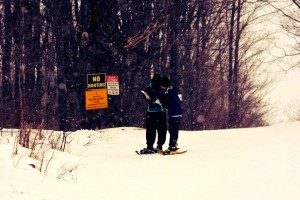 So, with our shoes strapped on, and with equipment borrowed from fellow Team Running Free runner Mark Cairns (thanks again Mark!), Jesse and I took off along with 85 other teams of two. The first part of the race had runners run UP the Blue Mountains from the base to the top. The race officials threw in an extra incentive of offering a prize to the first team to complete this task. As we were still getting used to our snowshoes (and were admittedly a bit undertrained for a 3 hour run), Jesse and I tucked in behind a large number of runners and took our time hiking up the hill. Upon reflection, I think we could’ve ran it a bit more aggressively, but in the end we were pleased to get up the mountain without feeling too winded or sore. From the top, runners follow a portion of the beautiful Bruce Trail into the Loree Forest, where most of the Raid took place. 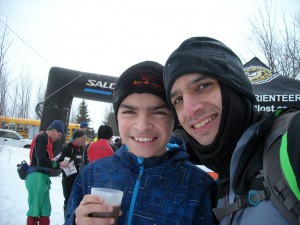 With the mountain hike and run to the forest taking up quite a bit of time, we were eager to get going into the meat of the event: the forest. With many checkpoints to choose from, we decided to spend our first half of our run on the hilly rugged east side of the forest. We didn’t really think too strategically at this point: we just remembered that last year we were mesmerized by the beauty of the hills and valleys and fun singletrack trail running on this side of the forest. Despite the fact that Jesse is a young guy not even in high school yet, he proved to be a master navigator, interpreting the map perfectly and leading us to checkpoints time after time. While I was there to help him correct a couple of minor navigation mistakes, for the most part he led us to each checkpoint, largely using only his map. As a proud dad I was amazed again at his navigation skills, just like I was last year!

These more remote checkpoints proved to be challenging as we found ourselves climbing major off-track hills and hopping over a stream or two. However, we were able to hit our goal of collecting most of the eastern checkpoints before hitting the easier checkpoints in the flatter central section of the forest. Our initial plan to tackle the rugged checkpoints, which was really a pursuit in fun, ended up being a blessing in some ways, as the easier terrain of the central section meant that we felt we were moving very quickly in collecting checkpoints in that area. What took us half an hour to do distance-wise on the hills and valleys took just a few minutes in the flatter central section, giving us new life in our racing strategy and encouraging us to pursue checkpoints in the forest’s northern end that we hadn’t planned on getting.

Every year Don’t Get Lost adds different spins onto their race to keep it fresh, and this year was no exception. At the 1 1/2 hour mark, teams could run to the finish line and collect a 2cd map that highlighted even more checkpoints hidden in the forest. Jesse & I were too occupied in our forest adventures to bother getting a second map, but we did happen upon two of the hidden checkpoints, and were able to punch them in for extra points according to the race rules. With these points, as well as the various checkpoints we intentionally collected throughout the day, we raced to the finish line in a full out run, determined to make it on time. It turns out that we finished 31 seconds beyond the cut off time, incurring a small penalty, but it was a penalty we were willing to accept after our 1 hour 20 minute delay last year! For our efforts, based in no small measure on Jesse’s navigation and our steady pace, we came 31st out of 86 teams, and won the small Family division of teams! We were thrilled with our performance, and felt that with a bit tighter navigation, more experience with snowshoes, and maybe a bit more specific fitness training, we’d be able to crack the top 20 or beyond! Nevertheless, our first competition as Team Running Free athletes was a resounding success, and it was such a wonderful experience to share the gorgeous forests of the Blue Mountains with my son. 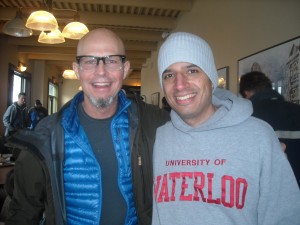 Overall I found the race to be extremely well organized (the hot chocolate at the end of the race was a nice touch, in addition to cookies and fruit: later on athletes were treated to a full lunch to eat while enjoying the awards ceremonies). The Snowshoe Raid attracts elite trail runners and adventure athletes, in addition to weekend warriors who want to spend a bit of time in beautiful scenery. And, as a bonus, I got to briefly meet Canadian Endurance Celebrity ‘Turbo’ from Boundless, a show that follows two Canadian athletes as they compete in endurance events around the world. I highly recommend the Snowshoe Raid for all runners and hikers as a fun winter alternative to treadmill running!!