The Salomon Snowshoe Raid organized by Don’t Get Lost Adventure Running took place Saturday January 18th at Blue Mountain. This event was a team based rogain style orienteering event where participants had 3 hours to clear as many checkpoints (CPs) on the course within the 3 hour time limit. CPs were given a points ranking based on the difficulty of finding the check point.

Mother nature could not have given us a better day or weekend for this race. The race started with a beautiful -3°C with 20 to 40 km wind gusts off the lake. The previous weekend’s warm weather and rain created a hard crust on top of the deep snow allowing us to travel on top and rarely post holing into the deep stuff below. Once we go into the shelter of the woods we were able to enjoy the warm winter day.

This year the race director threw in a few challenges to mix things up.

Challenge 2: At the 1.5 hour mark a second map was made available with an additional CPs with a point value of 680 at the finish line. The first map given at the start of the race had a total of 800 points. However, teams were given the point values if they happened to find CPs belonging to the second map before the 1.5 hour mark.

Challenge 3: three other Prize CPs were also indicated on the map and the prize was given to the first team to reach the CP however the team was then responsible for carrying their prize through the remainder of the course.

The availability of the second map after the 1.5 hour mark did change the strategy of how we cleared the controls on the course. We decided that we would sweep the CPs on the eastern side of the course and pick up the additional map as close to the 1.5 hour mark as possible. Once we had the new map we were able to reassess our route strategy and pick up some additional CPs that were on our pre selected route. We finished with a modest 700 points. Course map available here, GPS plot below. 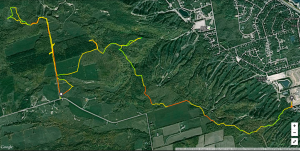 Snowshoes were available for rent at Blue Mountain at $10 a pair. Snowshoe rental did require participants to fill out rentals forms at Blue Mountain and pay on site. This process took longer than expected due to the disorganization of the Blue Mountain rental staff. The race website advertised the Atlas 9 series snowshoes but they ended up ranging from a variety of sizes. I was given a pair of Electras and my husband was given a pair of 9 30 trail snowshoes.  Based on the condition on the trails we probably could have gotten away with wearing our yaktraks overtop of our trail shoes and then only putting the snowshoes on for the off trail navigation. For the conditions I would have recommended a short snowshoe either the Atlas run or race series as you could run easily on the hard packed and icy trails.

All in all it was a fantastic day and I would personally like to thank the race volunteers who were out on the course and manning the aid station throughout the entire event. The hot chocolate and snacks was a welcome bonus on this wintery day.

View all posts by Erin Young →