for all the great stories of people who have turned their lives around through healthy eating and exercise, we’re hit in the face from time to time with stories of runners who suffer tragic consequences in the course of competition.

this past weekend’s race headlines included a couple of those sad notes.
at the Shamrock Half-Marathon in virginia beach, 16-year old cameron gallagher collapsed after completing her race.  despite receiving immediate attention from medical staff and subsequently being transported to a hospital she could not be revived.  cameron was active and athletic, competing as a swimmer.
and at the Fleet Half-Marathon in hampshire, uk, an unidentified male runner in his 40s collapsed and died near the end of the route.  again, medical staff was quick on the scene in an attempt to resuscitate the individual.
these stories draw attention and raise fears – and while not unique, they represent one of the least probable means of death.  a quote from a study out of the new england journal of medicine states “We calculated that the incidence rates of cardiac arrest and sudden death during long-distance running races were 1 per 184,000 and 1 per 259,000 participants, respectively.”
by way of comparison, the National Safety Council indicate the lifetime likelihood of death by other means in this graphic: 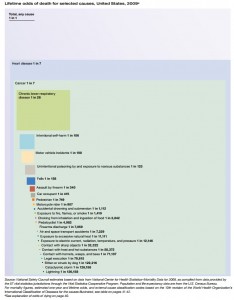 yep, you have a better chance of dying while riding your bike or by getting struck by lightning.  all things being equal, of course – no pre-existing heart conditions, potentially fatal environmental/anaphylaxis allergies or mixed medications.

now i’ve had my own up-close-and-personal encounters with scary race situations.  in my first full marathon (2011 scotiabank toronto waterfront marathon) i had the runner right next to me pass out and faceplant into the tarmac at about 28k.  another guy helped me to get this man back up to his feet, and he must have blacked out completely because he didn’t even remember falling forward.  aside from a scrape on his nose he was ok, and he resumed running after about 30 seconds.  however, during that same race 27-year old kale garner collapsed and died just shy of the finish line.

personally, i’ve only frequented the medical tent once – and it was a short visit at that after crossing the finish line at the 2013 hamilton marathon.  the one other real close encounter with a health problem while running was my experience with exercise-induced asthma at the 2013 erie marathon – and while it was frustrating it wasn’t anything close to a life-threatening situation.

i wanted to share this post to celebrate the indomitable human spirit – that in the face of adversity, whether

… so many of us strive to find the way to feel alive. 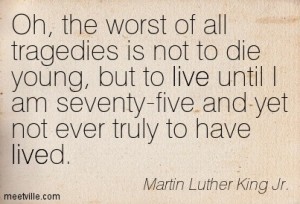