As I passed the 12 mile marker, I was 63 miles (100km) into the 500 miles for the year. I had to stop and take a photo so that I could send a text out to people that have pledged to donate so much per 100km, which is fantastic, as it is a little goal to hit within my bigger goal for the year. 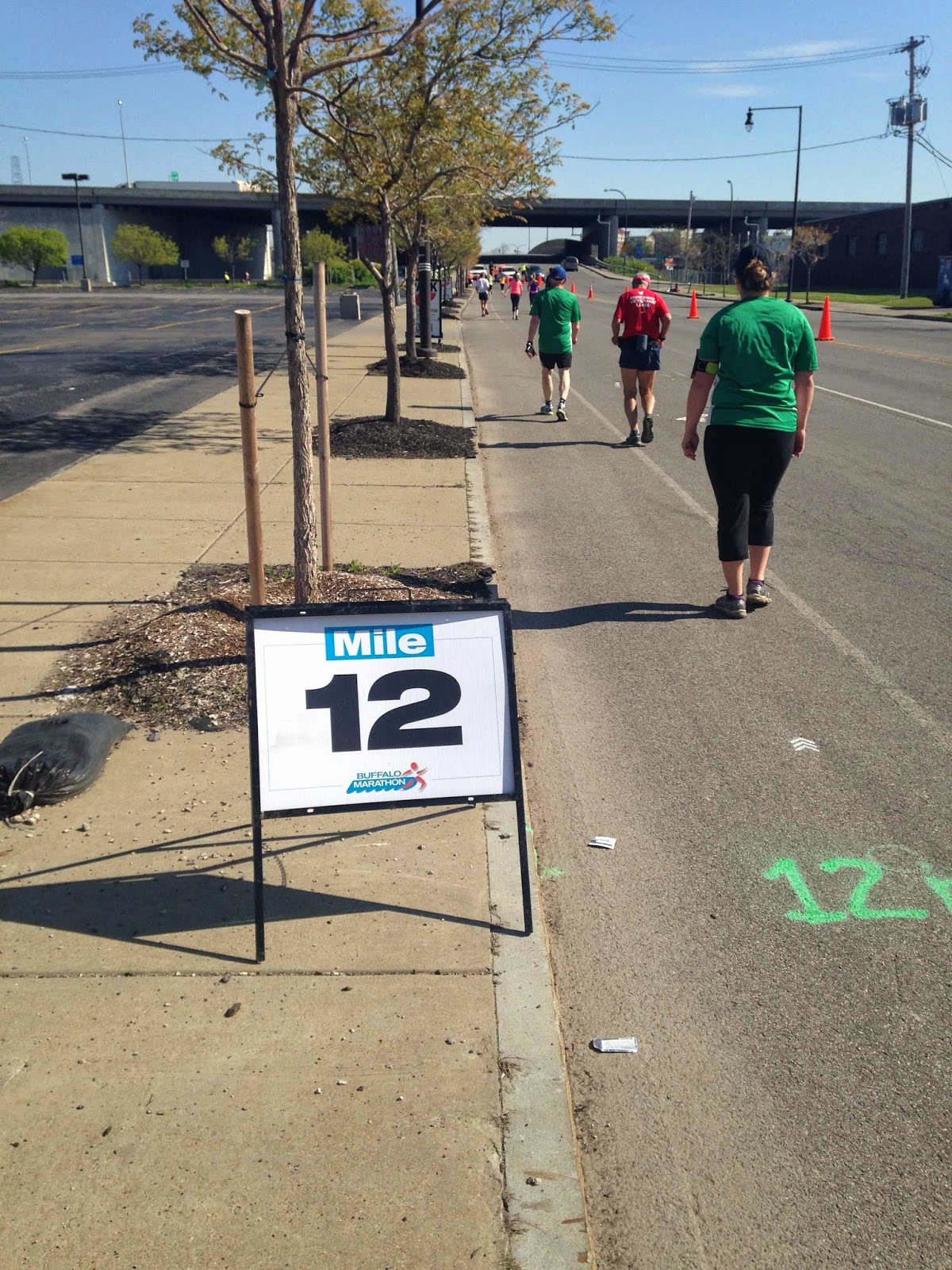 As you can tell by the tracker on top of the page, I am at 64.1 miles this year with some big days to come throughout the summer. This weekend coming is the Heart & Stroke, Ride for Heart which will be a 75km ride, then on the 14th of June will be the Niagara Ultra 50k, which goes from Niagara-on-the-Lake to Niagara Falls and back.
Saturday afternoon, Steve and I headed down to Buffalo to do the bib packet pickup, nice drive down. We checked into the hotel, walked over to the convention centre with about an hour left before they closed at 4pm. We walked around looking at the booths and then headed for pick up. After pick up we got in line for our pasta dinner ticket and were set for 6:30 seating. Walked back to the Hotel relaxed a bit then made our way to the church for dinner. We walked into the church and the place was packed, hard to find a seat. Pasta was ok, meatballs were great, bread and FREE beer lol.
After dinner we walked around Downtown Buffalo looked at some of the old buildings and the architect designs and stone work were amazing to see. In Toronto on a Saturday evening downtown is packed of people walking and driving, well not downtown Buffalo, we had to walk a while before seeing any movement. We then headed back to the hotel for an early evening to get some rest.
Sunday morning came at 4:45, got up slowly got this machine oiled (put a coffee on) and moving around. Steve and I left at 6:30 for a nice mile walk to the start line and as you came up Franklin to the start line area, there were crowds of people. The corral was one mass as the race was a chip race as opposed to gun time race, so it really didn’t matter where you were if you were trying to qualify for Boston.
Weather was a little cool at the start with a breeze, but it didn’t take long to warm up. Star, Spangled, Banner was sung, then shortly after the horn blasted and everyone at the start line was off. About and minute and a half Steve and I made it to the start line to begin our ½.
Took my heart rate pill about now and the just before the start line a GU Espresso Love, since I didn’t get my regular routine of Timmies in the morning before going into the start corral. We saw one the night before, closed, but not on the way to the start line, so second best is the Expresso Love GU.  We crossed the start line and we were off. I kept up to Steve for about a half mile, then patted him on the back and said see you at the finish line, break the 2 hour mark. We were in a big crowd and still doing a 5:45/km and that was wayyyy to fast for me, but it felt real good doing it and it would be amazing to be able to keep that for a whole ½.  So Steve found the pace bunny ahead and kept going. I dropped off to the left and slowed the pace down a little bit.
We headed up Franklin to Main on our way to the 5K mark just outside Delaware Park. The road was split with nice houses and spectators all along the route. We made it to the turn around and then on our way to the 10K mark on Delaware. As I turned, took another GU and looked up and saw a climb long and straight. Okay, find a spot ahead and go to it and don’t stop. That didn’t happen, had to slow down and walk (HR was getting to high). The sun was out now and started to really warm up, forgot my hat, so the sweat was just rolling down my face into the eyes, that burns.
As we topped the hill at the 4 mile mark, you can see all the way down the hill right into downtown. Such a beautiful sight with all the old buildings. By about the 5 mile mark, I was really wanting a Timmies and it made it worse by every cop that I passed at the lights was holding a Timmies I almost ran over, grabbed the cup out of one of the hands but thought, don’t need to get arrested. I don’t know how friendly they are first thing in the morning.
I made the 10K mark back in the downtown area without any problems, feeling pretty good, made the right turn to head out along Niagara Street for just over a mile, then turned towards the water front area for another mile into LaSalle Park. I saw a sign that said Peace Bridge – Canada, I thought maybe turn here and just run home LOL. Getting into LaSalle Park, this is where my right lower leg went one way and my upper went the opposite and a twist happened.  I had to pull up for about 10 minutes or so. No medics around, I was in between aid/water stations so decided to just rest it a bit. As I was waiting there, the BFD had there Water Pumper Boat on the canal spewing water out. 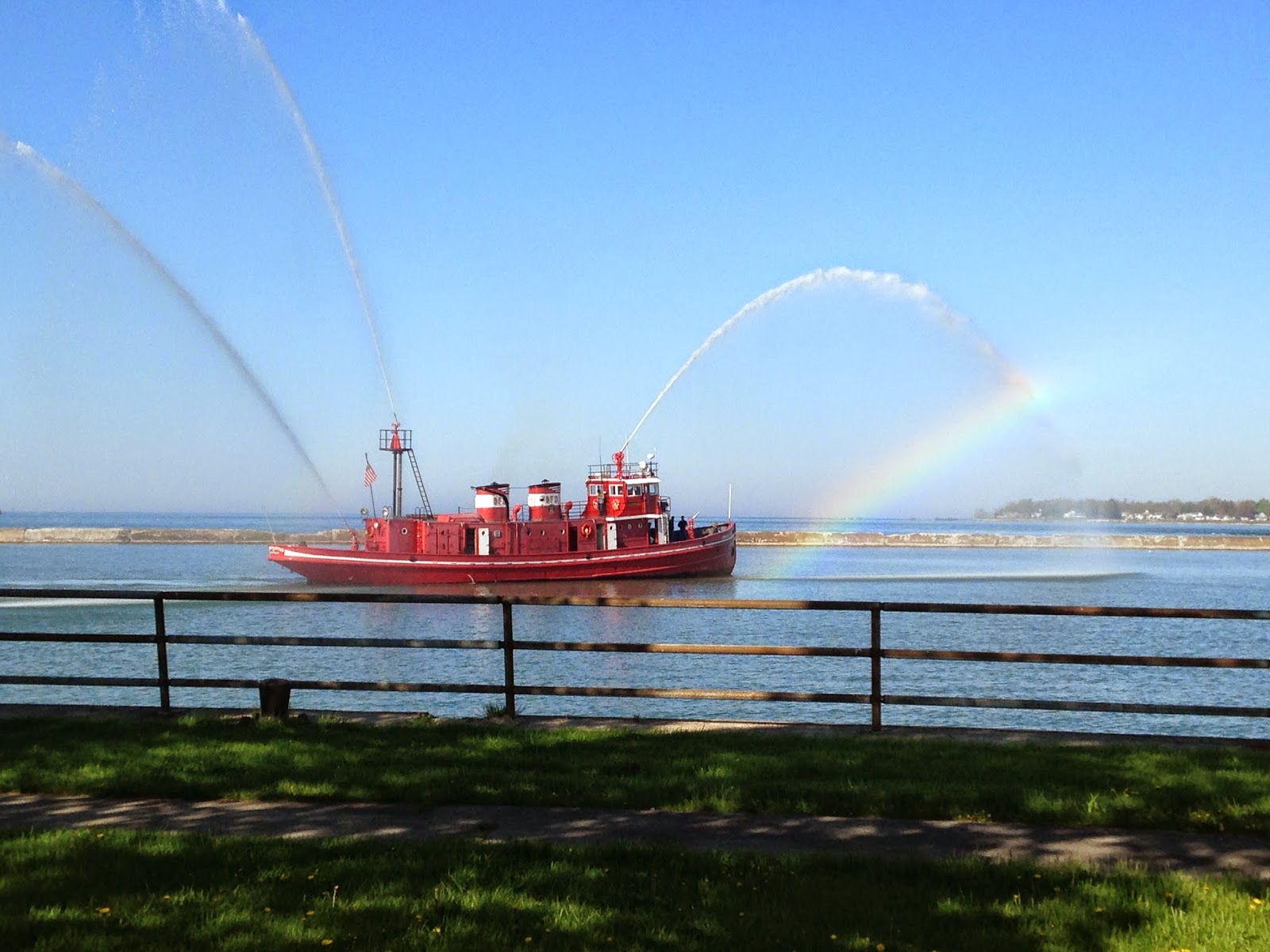 So there I was, resting and a rainbow appears from beside the boat. Well, I got up and said I won’t make a PB today but lets go for under 2:50 then. Made it out of LaSalle Park, through some nice townhomes, then around to the Erie Basin Marina for an out and back. 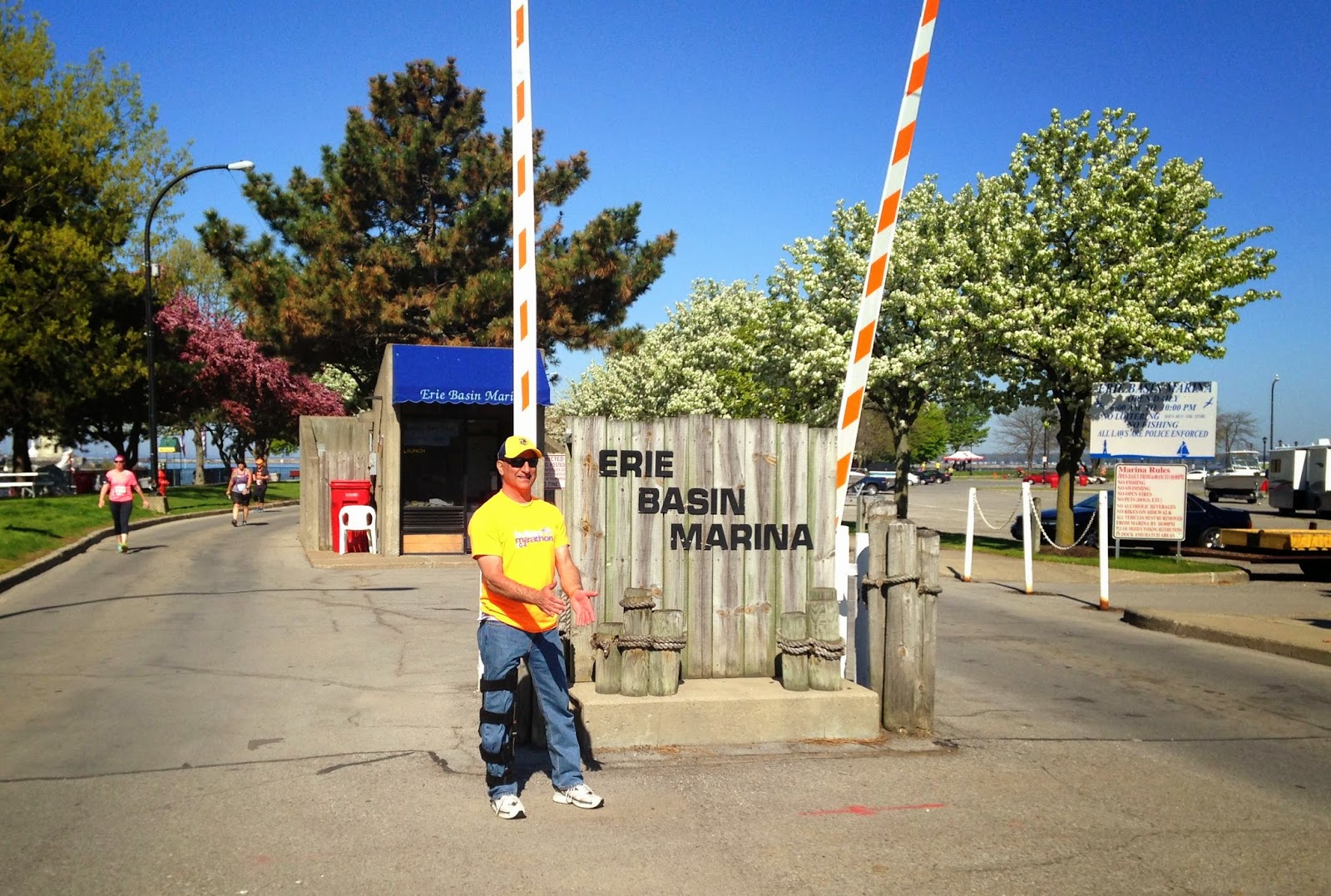 Just before we went into the Marina, on the left was the road straight up to Franklin where the Finish Line is. That was a tease!!! Came out of the Marina, along side the Naval Museum with a few ships there past First Niagara Centre (Buffalo Sabres Home) and I thought we were going to turn left up the road to the finish line…. NOPE, they had to tease you AGAIN. Make a right towards First Niagara and then go around a block for a mile, took my final GU Roctaine and then a half mile up is where I stopped for the 12 Mile mark photo. Made it back to the start of the block and looked at the Garmin and didn’t think I was going to make the 2:50 as it was 2:46 and I was in pain. I am cursing to myself trying to get myself to go faster and not stop, but as I made the right turn onto Washington Street, there is a climb, short steep climb for the Streetcars and I started to give up. Then this guy comes up behind me and says you can make it lets go and started pushing me to get up the hill. I make the top and had to slow to a walk and he said, I’ll be back. He went back to get his wife up the hill, then came back to me with his wife as we were turning onto Franklin for the final stretch home.
We are climbing a little grade to the finish line and about 400 metres away, him and his wife are telling me to go, go, go and started doing the theme from Rocky (da na naaaa, da na nawww) I laughed and said thank you so much for pushing me and ran the rest of the way to the finish line.  2:54:17, best ½ this year so far, but 12 min off a PB. I looked for them after the finish, but they were no where to be found, maybe they were doing the full marathon. It wasn’t that hot, that I got delirious thinking that this all happened, but then again stranger things have happened to me.
This year was the first year that the finish line was being live broadcast over the web until the finish. Ivana didn’t come down with us, so she was at home watching Steve cross the finish line in 2:10 he had a difficult time on the course as well and me cross the finish line. As I crossed there are two chutes right for the ½ and left for the full. I saw two video cameras at the finish line and I went to the one as I crossed and blew a kiss for Ivana who would be watching, the guy on the ladder with the video camera looked at me really really strange. No big deal I didn’t care I crossed the finish line, had a fantastic day and passed the 100km mark.
Well, I watched the video when I got home Sunday night and I blew the kiss in the wrong camera, that was for the Full marathon and the video for the ½ was on the far right hand side sort of getting a side profile of me doing it.  I didn’t even see that camera, I was like a horse with blinders on, saw something in front and went right for it.
Thanks to all the Volunteers working the water stations, the aid stations and at the expo and post race. Oh, I loved the Pizza and Beer at 10 in the morning, wish we had that in the Ontario races. I missed you at the finish line Ivana, but thanks for watching.
Doing some yard work at home now and getting the knee to be ready for Niagara on the 14th.
Thanks again, Steve, it was a great weekend. The Damaged Hearts In Motion, RunningFree.com, Heart & Stroke Machine is mending again and will be at it on the weekend for the Ride for Heart.
www.damagedheartsinmotion.blogspot.ca 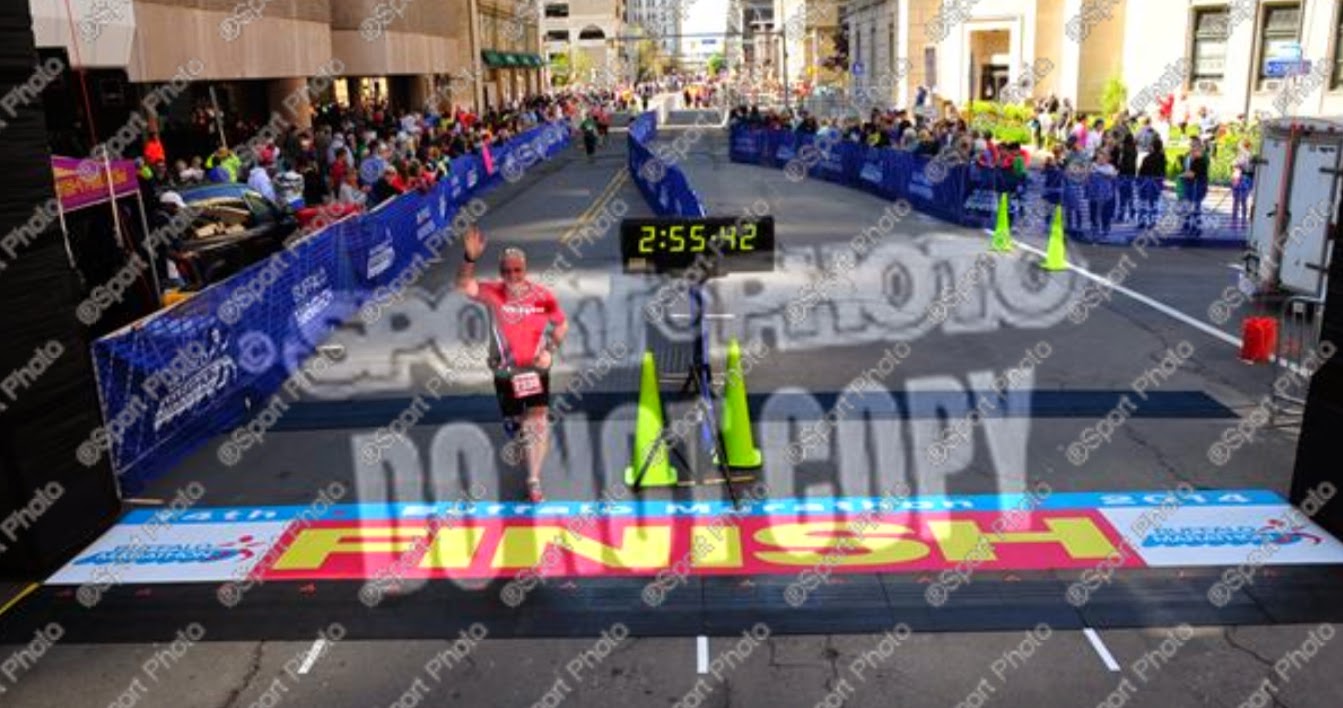 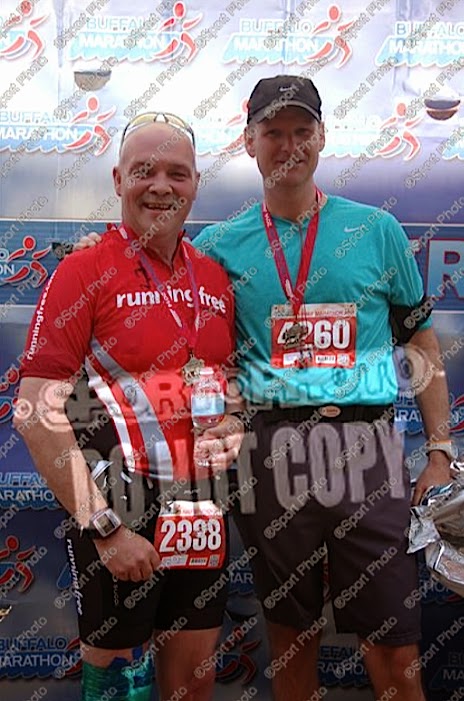 View all posts by Richard Borrow →