just when you thought it was all going according to plan.

that was the refrain of the day for this year’s edition of the hamilton marathon road2hope.

of all of the races which i had on the schedule this year, this was really the only one that i thought of as a ‘run this for me’ kind of race.  the other marathons that i’d been a part of in 2014 were either (a) training for another race or (b) to assist others.  as such, i viewed the hamilton marathon as a target race at which i hoped to post a solid PB given its layout and self-promotion as ‘canada’s fastest boston qualifier’.

considering that i was coming off of pacing the county marathon just four weeks prior, i tried to do everything right.  i took off extra days when i needed to in order to recover (and trust me, after two separate nights of excruciating and mysterious medial knee pain i listened to my body) as well as tapering appropriately while maintaining adequate speed work.  i even monitored my plan for achieving race weight (target was 137 lbs.) carefully so that it was a slide down and not a rapid drop.  and once again i also performed a three-day carboload to ensure that i had enough in the tank to put in a solid effort run.

this year i was thinking of avoiding the extra trip down to the expo pre-race but as it turned out everyone else who i knew was going to be running the same day were going to wait until the morning of to get kitted out – except for my buddy steve who was going to stay overnight in hamilton.  as i prefer to lay everything out the night before a race, i decided that i would go down early saturday morning and get a run in on the burlington waterfront before snagging my race package, as well as a couple of others as i received a couple of requests when it became known that i would do the day before pickup.

the expo itself was again held in one of the large event tents at the confederation park finish line area.  the pickup was no-nonsense and very straightforward, with several sponsors and vendors including running free, clif bar, honey maxx, and the filmmaker from Transcend who had been making the rounds to various expos and running events since debuting at the chicago marathon earlier this month.

with plans to travel down to hamilton with my friends kathleen and rolf, i woke up from a decent night’s sleep at 3:30 am.  after a decent peanut butter & banana bagel washed down by a beet juice/electrolyte drink mix, i felt like i was ready to roll when kathleen picked me up at 5:00 am.  i’d checked and double-checked my backpack to make sure i had everything i’d need – which i did.

kathleen asked if i could drive her vehicle as she was still in the process of a long recovery from a concussive injury – and explained how she debated coming at all to run today, but that with plans to take it very easy (for the half-marathon distance) she felt that all would be fine.  so we went and picked up rolf and began our trek southwards.

about 40 minutes later down the highway, in and amidst our banter about race preparation and aspirations for the day the penny dropped.

i slugged kathleen in the shoulder from my driver side position and said “i forgot your race kit“.

i’d picked up hers and rolf’s kits along with mine, but rolf had swung by the house on saturday afternoon to nab his.  in all my morning prep to make sure that i was good to go, i stepped out the door leaving kathleen’s kit hanging on a coathook.

i was in absolutely disbelief.

kathleen broke out into laughter.

almost as if a wave of relief had washed over her, she declared how glad that she was that she had a legitimate reason to not run today and risk feeling unwell for the next week or more.  it didn’t do much to allay my own incredible feelings of guilt at this epic blunder, but rolf also agreed that these things happen for a reason.  with that we continued on our merry way, although (as you might have anticipated) this became the source of many comments in jest throughout the day.

after being graciously dropped off by kathleen near the start line, rolf and i met up with a few other runners from barrie – erin, wendy and kevin – and i also spotted my friends peter and steve.  we wished each other the best, and then steve and i lined up close to the front of the ‘chute’ to try to reduce as much weaving and surging as possible. 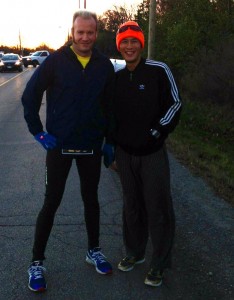 rolf and i ready to rock hamilton! 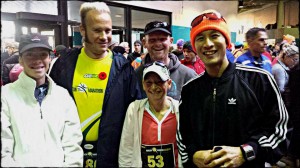 wendy, rolf, erin, kevin and me representing the Barrie RoadRunners

my plan was to go out at a 3:10 pace (4:30/km), as i felt like i was honestly in good shape to post at least a 3:10 marathon.  but my real hope was to pick up speed after about 24km and finish with a negative split.  in the early kilometres i got swallowed up by the 3:15 pacer group and had thoughts of sticking with them for the first half, especially after hearing the pacer speak of how you can lose a good 20s per kilometre if running unshielded from the wind down the parkway.  however, feeling like i really need to stay ahead of the group, i edged ahead at one of the first aid stations and stayed out in front of them, feeling comfortable and clicking off 4:30-ish kilometres with ease.

then it came time to scoot down the red hill parkway, and the wind played into the picture.  it didn’t feel too daunting, and i played it smart by picking up the cadence so that i wasn’t pounding my quads, and i ran all of the tangents as tightly as possible.  still, i was out there for the entire parkway stretch (and more) alone, exposed to the brunt of the wind.  and all of that must have taken more of a toll than i realized.

the last leg of this race runs back and forth along the lake, and as i passed the 35km sign i had flashbacks to last year, when at this point the 3:15 group passed me by with ease.  this time around i was determined that this would not happen – and while my turnover seemed fine to me, i began to notice the occasional person here and there passing me, and my kilometre splits creeping up around 5:00/km.

i didn’t want to admit it, but my legs were beginning to rebel.

my fueling had gone well.  for the first time in any marathon i didn’t feel even the slightest twinge of a muscle spasm.  i was running tall, and pumping with my arms to keep up the rhythm for my legs.  i had on my Skechers GOMeb Speed 2s to remind me that older can still be better.  how could everything be rolling in my favour and yet my pace slowing so much?

on the same stretch of the hamilton beach trail that i’d run the day before i was willing myself through to the end – but it didn’t prevent the 3:15 group (of about eight runners) from passing me with 4km to go.  i just couldn’t muster the reserves to keep up with them.  in fact, the only last gasp that i had was a sprint finish down the last 150m straightaway as i dueled a fellow marathoner to cross the line first.

it was just after i crossed that i noticed my friend and fellow running ninja lewis who had come down unannounced to cheer me on.  after a quick connect, i grabbed some snacks, pizza and soup from the racer’s tent and then roamed with lewis to try to find some of our mutual friends.  we found steve who looked fresh after having crossed the line in 2:54:16 at his first marathon ever – a clean BQ time and well under his 3:00 goal.  i was in total awe, and extremely proud of his 9th place finish.

erin wound up clearing 3:32:00 for another consecutive year of qualifying for Boston.  rolf and kevin crossed the line at just over the 4:00 mark, both of them trying to outdo the other down the closing 150m.  an excellent result for both of them as well.

as i reflected on the race, a few observations emerged:

as eager as i am to plan my calendar for next year, i am pretty much on the cusp of off-season.  i just have an adventure race with my friends sean (kathleen’s husband) and norm this coming weekend – my first foray into any kind of orienteering-based race.  after that, it’s a welcome break into ice cream and doritos again.