Is there truly a better cause than a camp for kids who need an escape?!?

With a race showing 23,577 finishers, it is a big event for a great cause.

From the top, the online registration process is standard with race kit pickup taking place at the Sporting Life store on Yonge Street. Location wise, it’s not too bad… if you live in Toronto or are familiar with Toronto. I work in Markham and live in Whitby, so it’s not the most convenient place to go. But as it is at the store, it’s great if you need to pick up any last minute items for the race.

On race day, we lucked out as my brother-in-law lives by Fort York and the finish line. We drove by his place, where we parked our car and he gave us a lift up to the starting area. There were tickets for sale for shuttle buses going from the Ontario Place parking lot up to the start line which also accommodates people commuting in.

In regards to the actual race, it is advertised as a fast race. And it really can be. It’s mostly downhill or flat. But that also assumes you start in a wave of like runners.

I only have one real gripe. When you register, you indicate your estimated start time, this way the organizers can group racers together, faster runners going first, slower runners starting later. Makes sense, right?

Unfortunately there were gaps in the corral fence in my wave and it looked like half my corral was filled with runners who were slated to start in a later wave (based on the colour of their bib). Normally I would not complain as sometimes when it comes to race day, you know you will do better than initially anticipated.

I was in the middle of the corral when our wave was moved up to the starting line. Doing another look around, everyone was getting excited about the start. When the horn blew, off we went. That’s when reality hit, half the corral was indeed not going to meet the estimated time for that wave. I spent the first three km trying to get past/around runners (or groups of runners) who were supposed to start in later waves.  C’est la vie.

After the 3km mark, the pack thinned out and I was able to run my race smooth.

But also at the 3km mark, I realized it was HOT!! And I mean hot!!! I hadn’t seen a morning this warm since the summer of 2014. Winter training doesn’t prepare you for heat!

At the 5km mark, it was time for another reality check. Keep pushing the pace, or decide that finishing is more important than time. I dialed it back, and I am glad I did.

I have never seen so many runners at the side of the race seeking medical attention. It was hot and everyone was sweating profusely. Two water stops along the way is standard, but this ended up being a day that more than one cup of water at each stop was needed. (I double fisted it at both water stations. 🙂

I finished my race and started walking back along the course to meet up with my wife who started in a different corral. When I was walking, I saw a lady at the 8km marker catch a toe on the streetcar tracks and fall pretty hard. She got herself up and off to the side, but it made me think… road races may not be as different from trail running as I had thought.

– Narrow trail to weave along / Lots of people to weave through

– Bugs in your teeth / Road sand in your eye

And my take-aways from the day:

– No matter what the weather forecast is, dress for it, but expect something different.

– Watch where you put your feet!

– No matter how much effort goes into organizing a smooth event, things will come up.

Don’t let it phase you.

– Bring water. Or make sure you get enough at the tables

– Give high-fives to all the kids cheering from the sides!

– Always smile. You did it. You finished it. 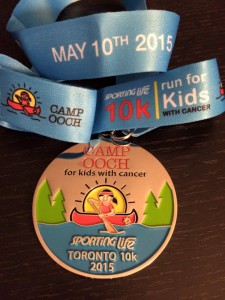