After running my first half marathon last year, I knew I wanted to tackle a slightly longer distance this year but knew I wasn’t ready to take on a full marathon. After much research, I decided on Run for the Toad, a trail race which offers both a 25K and 50K option. Every review I had read raved about how much fun and how well organized this race is, and I really liked the swag it offered (a Nike backpack). Plus, I’ve been increasingly curious about ultra running and figured this event would give me a peek into what that running community is like. Despite an injury that completely derailed my training in early summer, I managed to make it out so here it is, my race report for the Run for the Toad 25K.

Living a good 1.5 hours away from Paris, I decided to spare myself an early morning wake-up on race day and booked a cheap hotel in Cambridge via Priceline for the night before. It was literally next door to the official race hotel but significantly cheaper. On race morning, I enjoyed a nice leisurely drive to the race site and arrived at a respectable 8:30 am. Parking was getting full but they had lots of attendants on site directing us which made it go very smoothly. 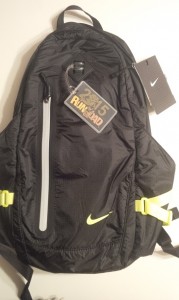 This Nike bag was the swag for runners

Arriving at 8:30 gave me plenty of time to pick up my race kit, go to the washroom, have a coffee and check out the exhibitors. I had read that it’s a bit of a hike to pick up race kits and that’s true, but walking back and forth was a good pre-race warm-up; plus, for a first-timer, it was a nice opportunity to start to get a sense of the landscape we would be running through. Also, happily, Tim Horton’s was there and very well-stocked with lots of free coffee, timbits, and cookies for everyone – it was a chilly day and I think most of us were drinking coffee just to stay warm.

Each distance had its own wave, with 25k runners leaving last so we waited a while for our turn to take off.  As we all gathered at the start line, one of the race organizers walked through the crowd, front to back, shook people’s hands and wished us good luck – what a nice personal touch! It reminded me why I prefer smaller race events over those huge several-thousand people races.

When the race started, we all took off running but that didn’t last long because within the first kilometre the path narrows a little and goes up a hill and everybody – I mean everybody – walks. I could feel the diehard runners were frustrated at being herded like cattle, but I had purposely started myself at the back of the pack and expected some clogging so I didn’t mind. I imagine you’d have to start yourself pretty close to the front of the pack to avoid that traffic jam, there’s just no getting around it once you’re in it.

The first few kilometres were an easy run over mostly dirt roads and paths. Although it felt like a while before we got into forest, the run was pleasant and the slopes weren’t too bad. It wasn’t long before I started getting cocky, thinking ‘why does everyone say this course is so hilly? I was really being overzealous with all that hill training in June.’ I kept reminding myself that I was only a few kilometres in and really had no idea what the rest of the course would look like, which was a good thing because around the 11th km I met the hill that all runners groan about in race reports. It looks like this (except worse in real life):

At this point I’d like to remind you that the 25k race is two 12.5km loops, so what you encounter at 11k you will encounter again at 23.5km. (The 50km runners tackle it four times!) Ew. I tried not to think about that.

However, one thing you can look forward to encountering a second time is the breath-taking lookout at the sixth kilometre (and again around 18.5). After running on dirt roads and through forest, it is such a lovely surprise to turn a corner and emerge onto the edge of a field with a view as far as the eye can see. It’s one of those moments that just fills your lungs with air and makes you want to spread your arms out wide. (Until the cold, unbroken wind hit and it felt a little less glorious!)

As I passed through the second loop of this race, I made pit stops at the aid stations which were very well stocked with tasty treats including ju jubes, M&Ms, and chips. I was dealing with significant IT band pain at this point and had to swallow a fair bit of pride walking most of the second loop. As I marched on, I loved how encouraging everyone was being to one another, and I was so grateful when one woman suggested that if I walked backwards down the hills, the IT band pain wouldn’t be so bad. She was right! Even that steep hill didn’t seem so bad the second time around, I think because this time I knew what to expect.

As I crossed the finish line, I happily leaned in for my finisher’s medal and hurried to the tent for the meal I’d been hearing so much about.

The post-race food was catered by St. Jacob’s Catering and it was delicious – salads, grilled chicken, cherry pie. Given that it was such a cold day, it would have been nice if at least some of the food had been warm, and it would have been really nice if the tents had been heated as I was chilled through and through, but I really appreciated that the post race food was more than just a bagel and a banana. This event is a class act.

On my way out, I grabbed a coffee (Tim’s was still serving!) and hustled to my car where I sat for several minutes with the heat blasting just to warm up. Next year I’ll either leave a bag by the finish line with a warm hoodie, or I’ll go back to the car to change before I sit down to eat. Lesson learned.

Overall, this was a really well-organized, fun event which offers, in my opinion, great value for the entry fee. I’m really looking forward to doing it again next year, injury-free, and taking full advantage of all those M&Ms along the way!