The Legend of Johnny Jogger – Part 8: It Ain’t Over Yet!

This is the never ending saga of two old farts who refuse to pack it in, and many more decrepit souls who choose to race in the deep freeze of January. 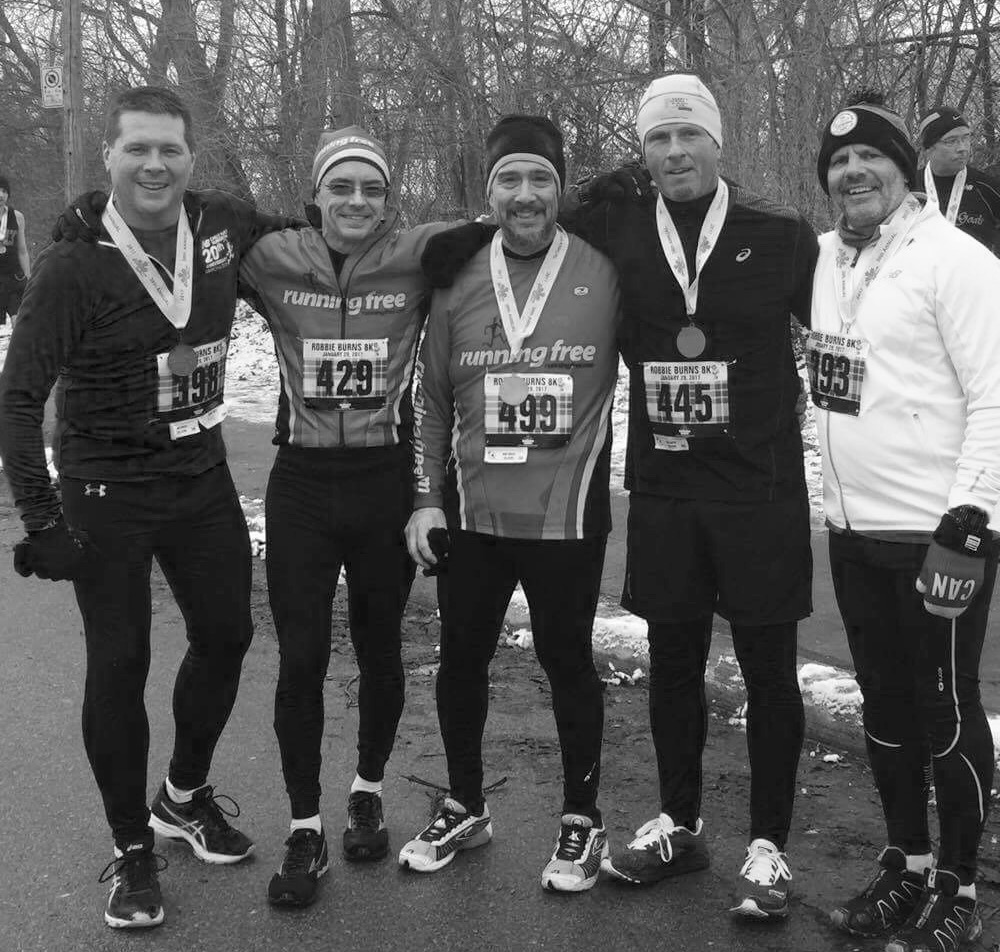 A sampling of ol’ farts.

And what is to be made of my muse, John Tranter (aka Johnny Jogger)? We have run our fair share of races together. It seems to me that younger competitors may have a good day or a bad day; but once you reach our age, it is more like good years and bad years. So what will it be this year? I am hoping a good year for us both!

Back in 2013 John and I both ran under 29:00, a respectable result for a 48 year old and a remarkable one for 60 year old. These were results that would have claimed the Grandmaster trophy this year and the year previous. I must also give a nod to the late Anthony Davey who ran 28:23 in 2013 to claim “The Prize.” Anthony is one reason our names are not yet on that cup, and any 50+ who can run that fast deserves to be recognized. BTW I have conveniently left out that John beat me that year in 2013. Oh, and 2015 too. I often take relief knowing he is never in my age group.

As is the case for the Chilly Half, I remain perplexed by so many who are near the top of their game so early in the season. Has the race season really even started? One year soon – I promise! – I will arrive at this race in top shape ready to contend for The Prize.

Alas this race marks another start to yet another slow re-build. Patience as always is key. Better to keep expectations reasonable, and best not to forget: speed kills. So I did the needful – I swallowed some pride and kept it around 32:00. It was about all I had anyway.

Until then, as a fellow TTC employee, I will share a vicarious moment with Sami Jibril who won this year’s edition in 23:48, a time not seen in an 8k race in many years! Race director Alan Brookes was spectating and was surely taking notes for the SRO 8k coming this April. Great work, Sami!

I caught up to John on my pre-race warm-up and not much of that was needed with a temperature of just -3C. Other years have brought the frosty cold by the freezer trunkful. These were balmy conditions indeed. After a few final strides, we headed back into the school to ditch our warmups and got piped back out to the start line. A hallway lined with bagpipers – a traditional earsplitting racket!

Soon we were sent off by no other than Mr. Ed Whitlock himself, with the feeblest of air horn peeps. Yes, decrepitude comes in all shapes and sizes, along with multiple world records.

Only one lane of the road was coned for the race. It was tight quarters and we were stalled behind a pack of Longboaters. John soon dodged past using the live lane for a quick surge. Oh, I have seen this move before! I immediately copied, for fear of losing John too early in the race.

Soon we were headed east on Fairview Street with some space to work. I led and John followed. I did not look behind. I had a target painted on my back.

At 3k my quads were starting to harden. My hams and glutes were feeling great, being the subject of resistance strength training over my layoff. I would see just how long I could keep John in my rear view, and counted off the km markers as my quads turned to stone.

Past 6k and still no Johnny. The hill before Brant Street might sort things out. To my surprise, I had legs for that. Then to my delight, I was able to pull away as we headed back up Locust Street toward the high school. This is one of the longest kms of the race – the brick wall of the school just never seems to get any bigger and the uphill grade takes a heavy toll.

I crossed the line, soon followed by John Clark (65) and then John Tranter (64). I had the 5th overall female and 2nd 50-54 male in my sights but let them go in the final sprint. My result was just good enough for a 3rd age plaque and a gift card exchanged for the usual pair of socks at Foot Tools. Of course both Johns claimed 1st age prizes for the umpteenth time. Well done as always!

A final thanks to Paul Langstaff who shared a traditional Robbie Burns toast. Those shots of whisky went down a little too easy for 10:30 am on a Sunday morning. Cheers! 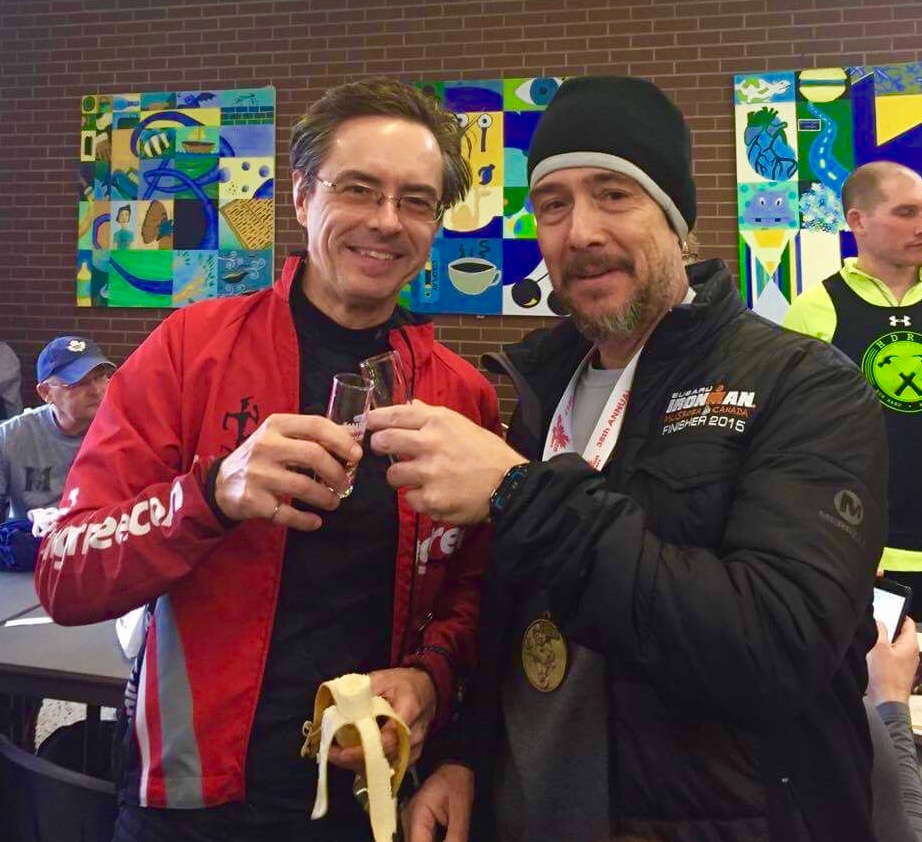 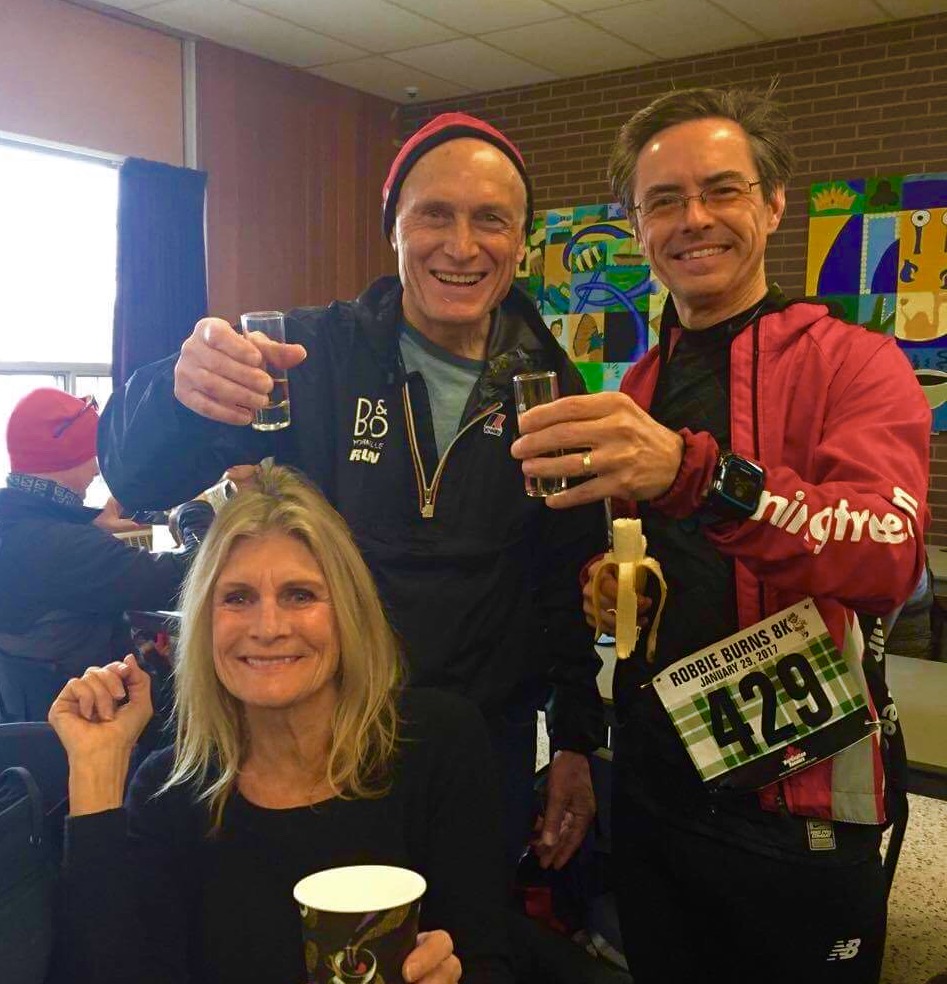 From the beginning: The Legend of Johnny Jogger – Part 1