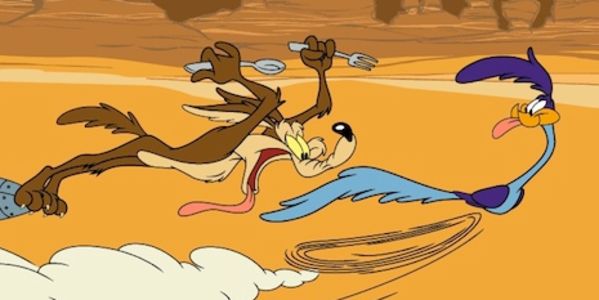 If you are under-40 years of age, you may not have gotten the joke.  Back in the 1980s there was a music group called Duran Duran who had a hit song – Hungry Like The Wolf.  I live in Muskoka and like to train early in the AM, as in 4:30 AM.  Now, Muskoka in the Summer is fantastic (except for the Deer Flies which no human can outrun), however the Winter is very challenging.  You see, we have snow.  And ice.  Lots of snow and ice.  I am a fair-weather runner, originally from Toronto, which for many years has meant lonesome treadmill running from November through until April.  This year, however, fate intervened.  We moved homes and have not yet set up the TM in the basement.  What is a runner to do as the winter crept on and the pants got a bit tighter?  What else?  Go for a run!

And so I did.  I resorted to running in my boots, with multiple and a full ski suit in artic-cold conditions.  I used headlamps that flashed blue, which is what the snow removal machines use.  My friends were not fellow runners, but instead the unsung heroes of the super-early AM who clean and salt our roads.  They would give me a smile, a look of bewilderment and sometimes a shake of the head.  They kept me going as they too had to leave loved ones and a warm bed to get out and do what needed to be done.

At first I used my trusted Garmin but shuddered in horror at the slow times!  I quickly put it aside and decided to shift my training mentality for the winter – run for the sake of running!  O the joys of jumping through snow drifts, skittering over ice and dancing around puddles.  Frozen toes and a numb nose lead to thicker socks and a winter balaclava.  With a toque on top.  And what did I discover?  Whatever I lost on speed was made up for in form.  I began to run straighter, more balanced, on lighter feet and with higher knees.  I felt tall, agile and, well, good!  Isn’t that what we want from a run?  To feel good?  How many runs have I dismissed because I was 5 seconds off “my pace.”  Everything was good in my world, and then it changed.

The howling, yelping and blood-curdling yapping took me by surprise.  We have coyotes in Muskoka, as well as wolves and bears.  If I had to choose a beast to encounter, the coyote is the better option, except in that moment, my instinctual brain was not open to reason.  I am a decently fast runner and the roads were perfectly bare on this fateful day and so I ran.  I ran faster than my treadmill can go (illusion or not, it felt real enough!).  I ran till I saw the lights of my home and pushed hard the last 200 m.  The coyotes?  I never saw them, nor did they really care.  They were just being coyotes.  And thus my Winter stupor has vanished.  I have decided that it is now Spring and am hungry.  Hungry to see how my training has prepared me for the upcoming season.  Ready to do hill workouts and track sessions.  Ready for new PBs or at least getting the t-shirt and medal!  Most importantly I feel good, refreshed and healthy.  Bring on the training.  And if you hear any howling at upcoming races, you’ll know that it is me just trying to psyche myself up!

Best of Luck Y’all (I lived in southern U.S. for a number of years).  If you are ever in Muskoka, early morning runs are always an adventure.

View all posts by Nick Bianchi →