On March 25, 2018, I ran the Around the Bay 30K for the third time. This year, a friend was kind enough to grab my bib and swag bag so I didn’t get to see the Expo but I heard it was well set up and had lots of great vendors. The women’s long-sleeved shirt was quite nice – I didn’t love the peach/coral colour when I first saw it, but I’ve really come around on it. The material is super soft and I’ve run in it a few times since the race. It’s perfect for Spring.

I checked the weather on race day and proceeded to have a daunting conversation with myself about what to wear (and whether I wanted to go at all!!). I opted for a few layers and, with a considerable amount of self-talk, I drove to Hamilton and got myself to the starting line.

Despite the cold, the first 10K of the race through downtown Hamilton went pretty well – I managed to stay pretty steady in my pace. I actually came through the first 5K in around 30 minutes, and felt like I had saved a bit of time for the rolling hills in the second half of the race. I like that this portion of the race goes through a more “historical” part of Hamilton, with lots of old buildings and storefronts. Outside of Christ’s Church Cathedral, church members were cheering and the bells were ringing, which made for a really enthusiastic start to the race.

The next section of the race travelled along the shores of Lake Ontario, where the wind really picked up and you could see waves in the harbor. Although it was cold, it was scenic. The spectators really came through at this point in the course – many local residents were out cheering us along, some of which were banging pots and pans. 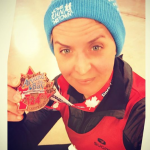 The hilly portion of the race makes up the “meat” of the course. It starts out easy enough with some gentle rollers and builds up to a few really tough hills, including the infamous Valley Inn Road Hill. The hill extends approximately 400m and comes at a particularly tough section of the race. Placed at the 26km mark, it brings you to the Hamilton Cemetery.  Tim the Grim, a regular at Around the Bay in Hamilton, was there to offer high fives and some words of “encouragement” (ha!).

The final portion of the race was mostly downhill and I was able to hammer it home as I made my way towards the FirstOntario Place in Hamilton’s downtown area. As we neared the finish, I really appreciated all of the cheers from the spectators who lined the final chute. I was really happy when I crossed the finish line with an official time of just over 3:07. Oh, and the finisher’s medal?

There’s just something about Around the Bay that keeps me coming back. The training can be hard, and the weather can be totally unpredictable, but there is no feeling quite like crossing the line in the stadium and getting your medal! Still to be determined is whether I’ll try again next year, which will be the race’s 125th anniversary. With the unique and challenging course, something tells me I will….