Note: In order to keep this concise, I am mainly noting points of interest regarding this race for anyone who may consider doing it sometime in the future.

For those who aren’t familiar with “Ironman”, it is an iron-distance triathlon organized by the World Triathlon Corporation or the “M-dot” brand, considered by many as the gold standard for the triathlon race experience.  The race covers a 2.4 mile (3.8km) swim, 112 mile (180km) bike, and 26.2 mile (42.2km) run, to be completed in a 17-hour timeframe.

Pre-Race Registration Process: This race was a huge commitment to say the least. It all started in June 2013 when one of my best friends and I decided that Ironman Arizona 2014 was going to be our first full Iron-distance race.  We had to sit at a computer and wait for the online registration to pop-up so we could register… to volunteer!  Yes, volunteer.  Ironman Arizona is the most popular Ironman race that you don’t have to qualify for and usually sells out within minutes of online registration opening.  The way to guarantee a spot is to go to Arizona, volunteer for the event to get a volunteer wristband, and line up at 7am the morning after the race to get pre-registration for next year’s event (which is reserved for volunteers).  This is what we did, and it turned out well since we were able to experience the race-week and see the course one year ahead of time.  Registration for this race costs $725 for the 2015 race.

Right before the publication of this post, IMAZ just had its record sell-out rate the day after this year’s race. The 2015 race was sold out on site, meaning registration never even made it to the online opening, usually scheduled for the day after the race.  This does not include Ironman Foundation spots, which are essentially charity spots and require you to bug your family and friends for a minimum of $3000.

Location: The race takes place right in the heart of Tempe, Arizona, home to one of the largest colleges in the States, Arizona State University, and is a suburb to the major double city of Phoenix/Scottsdale.  For anyone who has been to Phoenix/Scottsdale, I can assure you that Tempe is not like it’s neighbouring big cities.  It is a university town, meaning food options are sparse, and there is nothing to do unless you want to watch college football on Saturdays or shop at Urban Outfitters.  Both years I have been there, ASU had home games and the entire town was buzzing… as well as buzzed.  Because Phoenix Sky Harbor International Airport is a major US city hub, and home airport to US Airways, hotel options are abundant.  My friend and I stayed at a hotel near the airport,  right across from the metro light rail which took us into Tempe, 2 blocks from the race site.  We bought 7-day light rail passes and did not have to rent a car. 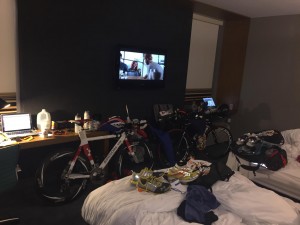 Race Morning: Wake up at 4am, eat pre-race meal, grab a taxi to the start/transition zone as transition zone opened at 5am.  Drop off extra water bottles into the “swim-to-bike” bag as well as the “bike-to-run” bags, located outside of the bike transition area. Go into the bike transition area to check on the bike, tire pressure, fill water bottles and add any nutrition needed on the ride. Get body-marked by one of the many volunteers, and thank every volunteer you see.  Drop off the morning-drop-off bag containing after-race clothing and change into the wetsuit and get into the zone! 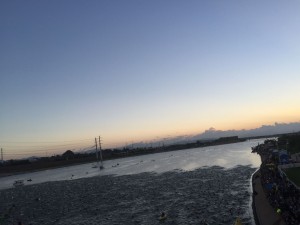 The Swim: Where does one swim in the desert? A man-made overflow reservoir with borderline dangerously high pH levels named Tempe Town Lake, that’s where.  This “lake” is more like a rectangular river enclosed with rubberized concrete walls.  Imagine a really large pool, but with really disgusting water.  Race organizers have opted to keep the mass swim start in favour of the rolling/corralled starts they now have at many of these events.  This is important to know for folks who aren’t used to being in open water with 3200 people.  The first 400-500 meters is the hunger-games of swimming. There are people swimming over you, elbowing you in the head, kicking you in the mouth (you are also doing the same to others) until it clears up a little bit.  But you are never swimming alone unless you swim near the shore and hug the wall, swim at the front or at the back.  The swim course is a long out and back single loop.  The out portion is directly into the sunrise at 7am, so sighting is a little harder.  I used tinted goggles which helped slightly. 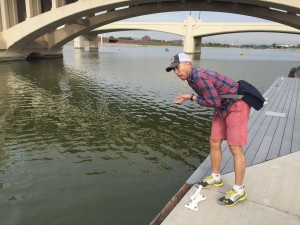 Tempe Town Lake was revolting, like my outfit. 2002 Ashton Kutcher called me after this picture and wanted is style back, along with the murse.

Part of the “M-dot” experience is the wetsuit strippers right after the swim portion.  They are awesome. After being horizontal for well over an hour covering close to 4km in water, it takes a minute to regain your ground legs.  When you get out of the water, there are 50+ volunteers ready to help you strip off your wetsuit.  All you have to do is unzip your wetsuit, lay down on the ground, and a volunteer will pull the wetsuit off you and hand you your wetsuit so you can run to the “swim-to-bike” transition zone. 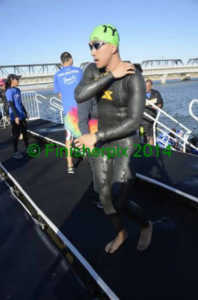 The Bike: One major difference with an IM event and other triathlons is the transition.  There is nothing allowed in the bike zone other than your bike.  You don’t need to play Tetris with other competitors, placing your transition towel, bike shoes, run shoes, hats etc.  There are “swim-to-bike” and “bike-to-run” transition bags that are handed to you at the end of each event so you can proceed to the transition tent to change.

The bike course is a mostly flat 3-loop grind out and back and is uneventful since there is no scenery whatsoever, unless you consider Saguaro cactus as scenery.  These are the cacti as they were portrayed in my childhood cartoons and reminded me of Wile E Coyote and The Roadrunner.  Unfortunately, my bike was more Wile E than it was Roadrunner (more on that later).  The first 9-10 miles of the bike unwind you out of Tempe until you hit the Beeline highway for another 9-mile stretch.  The highway portion is totally uncovered desert wasteland, so you are completely open to the elements.  Being Arizona, weather reports will be “Sunny with a chance of Sun”.  The winds are also known to pick up relatively early in the morning.  This year’s race had a 30km headwind on the out portion of the bike, but translated to a nice tailwind on the back portion heading back towards Tempe.  The deflating part was after the first loop, you knew you had to deal with that headwind another two times.  By the third lap, you might think to yourself, “this is a good way to spend a few thousand dollars”. 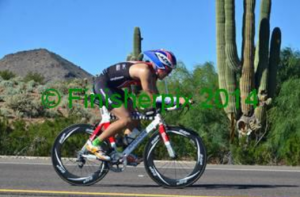 Fighting the 30km/h headwind up the Beeline highway 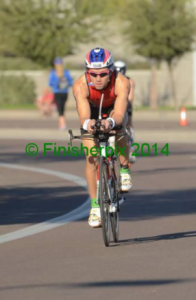 The Marathon: Another nice “M-dot” experience is upon completion of the bike, you simply unmount at the line and hand your bike to a volunteer who will take your bike back to the racks.  You then proceed directly to get your “bike-to-run” bag and into the transition tent where you will listen to complaints from other competitors about the wind and corny jokes about how it’s “a great day to run a marathon” (you know who you are, tri-geeks!).  The run course is a flat 2-loops around Tempe Town Lake and is 90% on concrete.  Be sure to soak it in, wave at spectators, thank all volunteers, and say sorry to your quads.  If you are on the course for over 12 hours, be sure to pack arm warmers in your “bike-to-run” or “run special needs” bags as the temperature will drop drastically once the sun goes down.  At this point in the race there are no tips I can offer here.  Nothing will help you other than sufficient training and proper preparation.

Finish & Post-race: The finish line at an Ironman event is unlike any other. The energy is indescribable.  Once you cross the finish line and Mike Reilly tells you “you are an Ironman”, a volunteer catcher will literally “catch” you regardless if you are looking strong or crumbling in exhaustion.  They walk you to get your finisher medal, get your picture taken, and direct you to food.  Thank them.  You have until midnight to grab your bike and morning clothes bag to head back to your hotel. 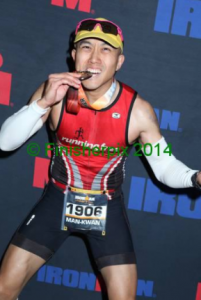 My personal experience: The race did not go as planned due to a mechanical issue during the second lap of the bike.  This cost me a sizeable chunk of time while riding in the wrong gear because I couldn’t shift as well as eventually stopping on the side of the road waiting for the SAG Monkeys (on course bike assistance) to find me and help fix the mechanical issue.  No matter how much mental preparation you go through and tell yourself this is “going to be a long day, keep persevering”, it’s hard not to have your spirits zapped when something like this happens and all you see is the clock moving forward, while you are not.  On the upside, I believe the rest on the bike saved my legs for the run.

They say add an hour to your marathon time to determine pacing for the marathon that you “should” run in an Ironman.  Because I’ve had a busier than usual year for work with a lot of travelling, my training was all over the place, and I didn’t have time to do any triathlon races to build into the Ironman.  The last triathlon I did was in June 2013, so I went into IMAZ with almost 1.5 years without racing.  I signed up for Toronto Scotiabank Waterfront Marathon last minute and used it as a prep for Ironman.  I ran a 3:38 at Scotia, and a 4:42 at Ironman, so I guess that “add one hour” rule applied.  However, I may have held back too much because I didn’t feel like I did an Ironman after the race, just a long workout. A 13+hour workout.  But I really didn’t have much soreness after the race, or a week later.  Overall, it was an amazing experience that can’t be fully described with words.  Just something one must experience for themselves!