where’s samwise gamgee when you need him?

as much as i was looking forward to tackling this bold new challenge and finally stepping into (what i would consider) true ‘ultra territory’, i’m not sure that i was fully prepared for just what kind of test this would be.  the very fact that the event has The North Face as it’s title sponsor, that it is part of a six-city north american circuit and that it traverses up and down collingwood’s blue mountain should have provided me with plenty of advance warning as to how the race would bare its teeth.

but just for good measure let’s toss in a humidex reading in excess of 32°C.

it probably goes without saying, but this was a gnarly race.  the best way that i can detail it without drowning out all of you in the minutiae is to recount (appropriately) the ups and downs of my first ever 50-miler.
UP:  pre-race organization

being as high-profile an event as it was, there was plenty of social media interaction and email information sharing leading up to the big day.  everything from the regular updates from The North Face Endurance Challenge Series (TNFECS) organizers, to the ‘virtual race package’ (including coupons, featured product highlights and promos for upcoming events – which i appreciated as part of its waste-reduction ethic) to my friend cait’s facebook posts about the amount of poison ivy located on the section of trail that she helped to mark with ribbons helped this guy feel better about the journey he was about to undertake.  TNFECS also had multiple race kit pick-up points (in toronto and at blue mountain) which made it plenty convenient to not have to cram everything into the morning of the race.

despite living just about 60 minutes away from the mountain, i never did take advantage of any pre-race workouts that would help familiarize me with the terrain.  so all of my hill work was done to ‘approximate’ the effort required to ascend this section of the niagara escarpment, but nothing really came close to the exertion level and duration of climb/descent that i would encounter.  i’m glad that i did put in as much trail time as i did however, as i think that that probably helped me to remain somewhat nimble during the latter miles.

in addition to traveling with my friend and Barrie Ninja colleague lewis (who was serving at the first of the aid stations) it was great to catch up with my friend robin in the wee hours awaiting the 5:00 am start, as well as meeting fellow Team Running Free athlete glenn.  having forgotten to bring my garmin 305 to the race (!) i lacked the ability to determine the time intervals between gels and salt tabs so i was reduced to harassing the other racers for time-checks – which they were all gracious enough to provide.  one runner in particular was good to me – i connected with a guy named scott who seemed to not only be carrying on at a pace that seemed comfortable to me but also had plenty of stories to share.  scott was a seasoned ultrarunner and had completed the western states 100 twice, in addition to the canadian death race and many other well-known and lesser-known ultramarathons.  we shared over two hours of running and chatting together, and even managed to figure out that we had a friend in common from our work days (me former, him current) with nike canada.  it was great to make a new friend and pass a good chunk of time during a long day’s workout with a super-nice guy. 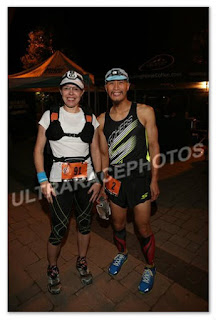 robin and i getting ready to take this mountain down!

i would discover over the course of conversation that scott was a 2:52 marathoner – much faster than my PB over the same distance.  add to that that he was much more conditioned for this kind of ultra (having previously completed the canadian death race as a solo runner, being a 2x western states finisher and with copious numbers of other ultramarathon belt buckles to his credit) and that he was younger by a few years and that all meant that i tackled the first half of the race too ambitiously.  i definitely wound up running a huge positive split (4:22:28 for the first 40.7km, 6:17:18 for the next 40.7km) and felt desperately more banged up on the home half, although i never did hit the black hole of despair that i did in my 56km race last year. 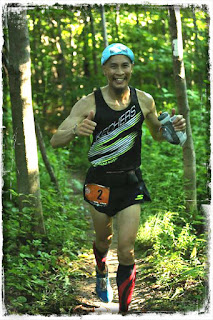 still smilin’ at this point!

UP:  traveling light
being deluded enough to think that i could be competitive in this event i wanted to provide myself with every advantage that i possibly could – and after having read an article that described how elite level athletes carry less with them than most recreational ultramarathoners i decided to leave my AK 2.0 race vest at home (also because it was going to be such a scorcher of a day) and travel with just the SPIbelt passed on to me by my friend/sensei jim.  since this SPIbelt contains only one pocket i managed to wrangle two other small pouches from some other pieces of gear we had lying around the house, including an old nintendo ds carrying case for which my kids had no further use. 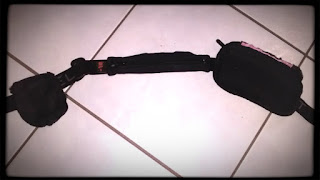 on the left, a small pocket for salt tabs – on the right, the old DS pouch for gels

DOWN:  relying on aid station nutritiondon’t get me wrong – the aid stations throughout this race were really well stocked with everything from skittles to PB&J sandwiches to the requisite boiled potatoes and salt dip (mmm mmm good!).  the problem was that i thought that i could sufficiently stock up on the gels that they provided (clif shot) at each station and thereby limit the amount of unnecessary weight on-board.  this brand of gel was not new to me so i had no initial concerns with ingesting them … but i discovered that after about six hours of racing they were much too thick for me to easily consume, and so for the last 10 packets of gel i had to psych myself up each time for the strong gag reflex that would erupt as i tried to down the much-needed calories.  on top of that, i forgot to re-stock on gels at one aid station where the next stop would be 8.4km (a solid hour) away meaning that i would run that stretch calorie- and electrolyte-depleted.  maybe there is something to carrying all of that gear to house your own stuff … UP:  post-race festival/festivitiesthe advantage of hosting a race that starts and finishes at blue mountain village is the guarantee that regardless of season the venue will be a hub of activity.  aside from the expected finish line tents with fruit, electrolyte drinks and water stations there was also an ice bath area (with full tubs to sit in), free massages (with a significant waiting list) and a post-run meal served up in an air-conditioned lodge.  on a sweltering summer’s day there were throngs of tourists wandering through the village, many of them kind enough to offer words of congratulation as they noticed the wording on the medal’s ribbon – this level of bystander traffic gave an otherwise demure ultramarathon the feel of a large-scale, high-profile road race. 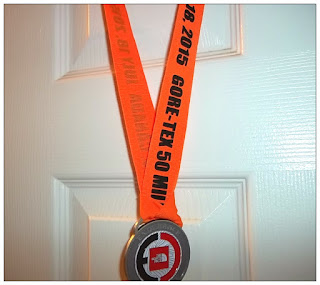 i knew that i would be tired, but i had no idea that i would suffer from the kind of gut-rot that would ensue after crossing the finish line.  i found myself in that place where i could hardly bear the sight or smell of food even though i knew how critical it was to initiate the recovery process right away.  i wasn’t experiencing nausea but felt on the edge of vomiting with the faint hope that doing so might rid me of the disgusting feeling i had in the pit of my stomach.  my friend lewis did his level best to help me to the food pavilion in order to get my finisher’s meal – even to the extent of putting my plate together for me – but i could barely down two bites of my burger and maybe a forkful or two of salad.  my legs, albeit fatigued, was not the part of my body that seemed to be rebellion.  it took a good six hours before i actually got around to eating anything substantial, and even the next day i felt the lingering effects of clif shots coating my stomach with what seemed to be a semi-toxic layer of slime.

with our official race starter dean karnazes providing fair warning at 5:00am that at some point we were each going to encounter pain out there on the course, i prepared myself to enter the hurt locker at least once if not several times before i would be done.  that being said, i didn’t feel as if i ever really danced along the edge of disaster and at no point did i ever seriously consider a DNF (although approximately 20% of all of the 50-mile racers who started pulled out before finishing).  i’ll be honest, there were two or three points at which i thought that i would have a much better rest of the day if i just sat down at the next aid station and didn’t get up, but what kept running through my head was jim’s mantra of “take another step” – which is just what i determined to do each time.

without a doubt the toughest parts of the course were the downhills – not that i didn’t attack them with anton krupicka-like abandon, but there were so many (amounting to 6300+ feet of elevation change).  the uphills were no bargain even if you power-hiked them, and the worst hills were actually those sections that followed the road … stretching on for nearly a kilometre of steep incline.

however the toughest section had to the closing kilometre of each loop which was a little over 1000m of descent following a cut-into-the-trail wooden staircase which demanded precision footing.  this was made all the worse when a summer shower during the 9th hour introduced a mud dressing to the stairs – exactly what you want when your legs have already begun to feel like jell-o.

it was strangely anti-climactic to finally cross the line after 10:39:46 … i thought that i might feel a huge sense of relief, or an emotional wave of joy having tackled the longest distance and time on my feet in a single session of activity.  honestly, when the medal was put around my neck i simply focused on keeping my legs moving in order to pre-empt muscle spasming (and to head for the shade/cool).  more than a week later now and i’m still not sure that i’ve digested it all … whether or not completing a 50-mile race was really not that big a deal (despite some of the comments shared with me), or i struggle with perpetual dissatisfaction (e.g. i could have run a smarter race, finished with a faster time) or have moved on to the next dot on the horizon already (e.g. october’s detroit marathon, what could i run to qualify for the WS100?).  honestly, i was more excited for the people who i knew who were also competing over the weekend in various race distances than i was for myself … the medal went almost immediately into the top drawer of my dresser (with all of the other accumulated race hardware) and my bib tucked into the envelope housing all of my other race bibs. 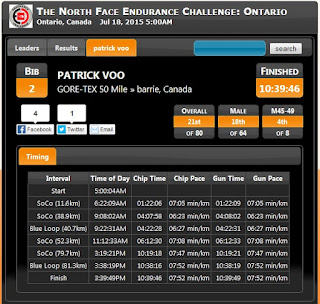 it’s not that i’m not pleased with my accomplishment – hey, it was a PB for me in the 50 miler. 🙂  but i think that i’ve discovered what separates trail/ultra races from your more conventional road/marathon-and-under races … it really is more about the journey than the destination.  and for nearly 11 hours i had a really enjoyable trek across some of the most gorgeous scenery in ontario.
that’s a win in my books!