the caution tape got me again.

earlier this spring at the Sulphur Springs 50k i wound up running about an extra kilometre because i zigged when i should have zagged, having missed the fact that a caution tape barrier had fallen to the ground.  this time the tape was tied up nice and tightly … only it barricaded off the trail that should have been the home stretch of the race and led to me take a detour that had doing the hokey-pokey (“and you turn yourself around, that’s what it’s all about“).

i’d wanted to participate in the 2014 edition of this race because it was the inaugural event and because my friend kate stewart was on the event organizing committee.  as a 7k trail race hosted by the friends of scanlon creek in support of a project to build an accessible trail at the scanlon creek conservation area it would fit in nicely to a ‘normal’ saturday workout, but last year i was out of town on race weekend – but not this time around!  even with pacing duties at the county marathon coming up in a week’s time i made it a priority to participate in the second annual competition.
registration was taken care of easily enough online, and i waited until race day to pick up my kit – which included the most AMAZING goody bag including various energy bars and snacks, the race t-shirt, toothbrushes, cups, heat/ice packs, an emergency whistle, teas, vitamin drink mixes, all in a reusable fabric tote bag … seriously, i would figure that the swag included outdid just about any other race of any other size/distance that i’d been to.  it was as heavy as a full bag of groceries and provided full value (if not more) for the $40 registration fee. 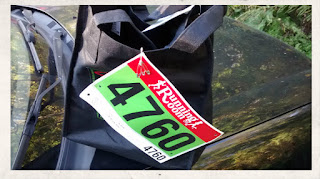 this race kit bag definitely had some heft to it!

as the pick-up took place between 8:00-8:30am, that gave me about 90 minutes before the start of my race.  the 1k and 3k races would start at 1/2 hour intervals beginning at 9:00am, so after a quick visit with my friends robin brunet, rhonda-marie avery, steven parke and amanda parlett (from MEC, who was staffing an aid station) i headed out with the intention of scouting out the entire 7k course.  my initial observation was that it was incredibly easy to follow given the number of orange surveyor’s flags and regular fluorescent spray paint markers on the ground identifying just about every stump, root or rock that could potentially cause a stumble. 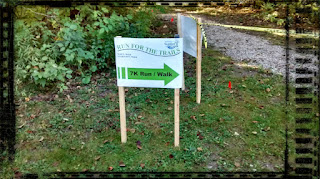 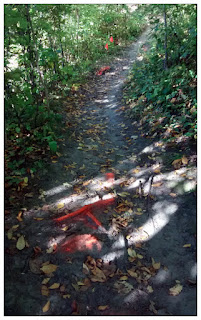 taking mental notes along the way, i observed that the course was fairly undulating with only short-ish stretches of flats – and the most significant section climb began with a log staircase. 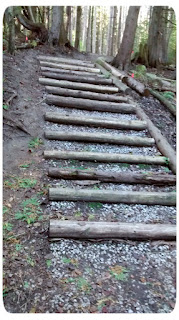 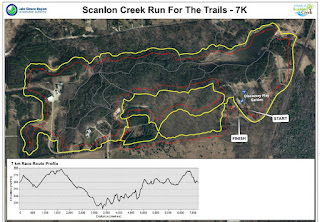 it got real interesting when i was closing in on the 6k mark – looking at the time i was wanting/needing to wrap up this warm-up run in the next 5-6 min. but when i continued to follow the route i found myself doubling back on a section that i’d already run.  confused, i did a 180° and busted it across a caution tape barricade to a trail that i knew would take me back to the start/finish area (which i could tell just by following the sound of the music being played over the announcement speakers).  arriving at the pavilion where everyone was gathering i spotted my friend kate and thanked her for her work in putting together the event – and when she asked what i thought of the trails i quickly mentioned my bout of disorientation and she reassured me that flags would need to be shifted for the 7k runners and that between the signs and the on-course marshals we wouldn’t have any issue whatsoever navigating the route.
the race

as we gathered in the chute the MC noted that anyone capable of a 20 minute 5k should make their way to the front of the pack, which i did.  looking back i’m not sure it was the best decision because at the gun there were about five of us who took off like we were shot out of a cannon.  yes it was a slight downhill but when i looked at my watch after about 400m the pace was a smooth 3:23/km – way too fast for my own good.  even with the prospect of blowing up by the time that i’d hit the 4k or 5k mark i stuck with the lead pack of three so that i could avoid being jammed in when the trail went single-track.

over the first 5k i was only passed by one other runner – the guy who would eventually take third place overall.  he zipped past me once my launch thrusters fizzled out (at about 1.5k) but i managed to stay within about 100-150m of him until about the 5.5k mark.  that’s when we went every which way but loose …
remember how i’d gotten misdirected during my scouting warm-up?  same thing happened during the race – except that since there were course marshals helping to usher runners across the access roads i stopped to check in with them when i encountered them for the second time.  of the three (volunteer) marshals that i spoke to each one kept telling me that i needed to carry on in the same direction that i’d been traveling, even though i knew that a third loop would bring me back to the exact same spot.  in fact, between re-running this section and turning right around and running against the flow of traffic i passed the official photographer four times (although i’m sure he did have any interest in photographing my backside).  it wasn’t until i acquiesced to their direction pointing that i got to a split in the trail where a caution tape barrier was clearly blocking one path, but when i paid close attention i could see the surveyor’s flags running down that path as well as the other fork.  with nothing left to lose (i could no longer see mr. third-place and had already started passing people who had started in the middle section of the chute) i squeezed past the end of the tape barrier and followed the ‘road less traveled’.  about 150m down this path there it was:  a sign reading “Scanlon Creek Run For The Trails – 6k”.  i’d found my way onto the correct section of trail and was headed for the finish.
when the trail finally spit me out at the finish line straightaway i crossed behind people i had not ever seen ahead of me.  looking at my watch, i did the math and figured out that i’d run 7.9k, and noted that for the timekeepers at the finish line clock.  as i stood explaining to them the puppy tail-chasing that i did and the misadventure with the caution tape, mr. third-place came up to me and said “where did you go?”  i discovered that he and the first and second-place finishers each ran about 5.8k because they did not re-do the loop over and over to find the correct trail but instead cut across an open area to the finishing straightaway.  while i was a bit bummed to not have place properly in terms of the finishing order it was consolation to know that it wasn’t just me who couldn’t follow directions. 🙂

all in all it was a gorgeous day (temperature was about 11°C to start the morning, 16°C at the finish of the race) and the trails were in amazing shape.  there was an awesome spread of post-race snacks, including homemade banana loaf!  i couldn’t stick around for the whack of draw prizes that they had available, but did connect again with kate who sought me out to specifically apologize for the confusion on-course and asked me if i was fairly certain that i’d finished in fourth spot.  i thanked her and let her know that it really didn’t matter – it was such an enjoyable outing for a fantastic cause, and i got my workout in. 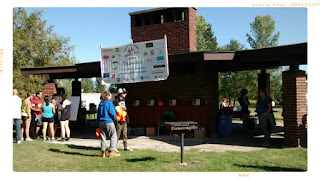 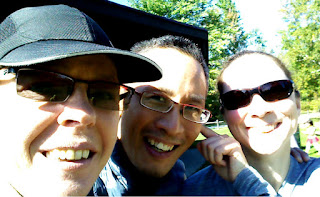 from l-to-r:  robin, me, something protruding from my ear, rhonda-marie

kudos to the friends of scanlon creek for all of their work – not just for organizing this race but for their efforts in preserving this natural forest/marshland and providing people of all abilities the opportunity to enjoy it.  i definitely hope to get back out in 2016 for another go at the Run For The Trails 7k – this time it’s personal! 🙂 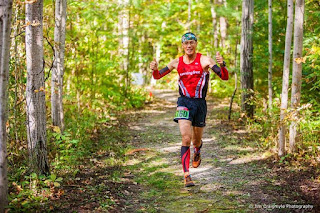