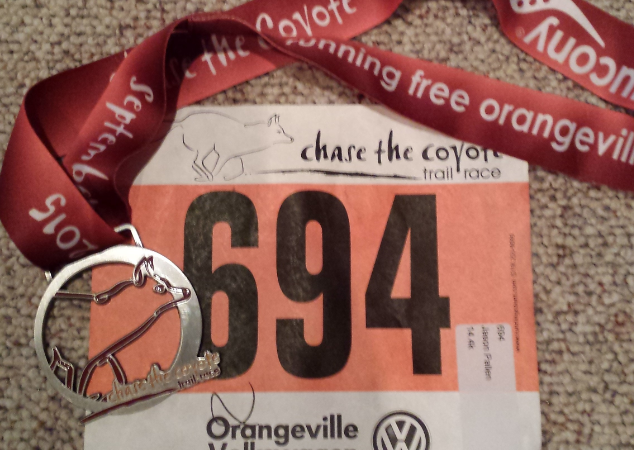 My ‘running summer’ had been a bit of a disappointment.  After my first Around The Bay 30k race in the Spring I had been either treading water or losing ground.

The excuses are always readily available.  I had some IT Band and hamstring injuries that kept my training a bit below the intensity that I needed and I have been carrying around some extra weight I didn’t have last year.

Regardless, this race made me feel … like I am back in the game baby!

The Chase The Coyote website is simple and has all the key information.  From race maps with elevation to videos of the course all the tools I needed to plan my race, plan my trip and prepare for the race were there.

Communication from the race was ample.  The last email also warned runners about parking which was limited and with my arrival time meant I walked in from about half a KM away but I expected it which to me makes it fine.

Event organization and volunteers were awesome with many Team Running Free members active on and off the course.  Once getting to the race site the vibe was fun, positive and well put together.  The few organizations that were there with tents were interesting and relevant.

Swag came in the form of a toque or buff.  There were only buffs left when I got there and I had to leave it behind as I didn’t have time to walk it back to my car.  There was nothing left after the race … so just medal bling, no swag for me!

I chose the Challenge 14.4k distance as this seemed to be the distance with all the climbs and besides … I wasn’t necessarily ready for those extra KMs.

This race I decided to actually prepare a bit.  I researched the elevation chart on the website as well as do a search for actual GPS data on Strava from previous races.  I could see 3 major climbs that peaked at approximately 3k, 6k and 9.4k.  This helped me prepare for how much to push and when.

Reviewing the race map on the website was fun.  The 3 highlighted sections seemed like something out of a horror movie:  Cardiac Hill, 64 Steps To Ruin and The Roots of All Evil.

Race Director Norm confirmed my research a bit with his pre-race chat to the group “take it easy for the first 2kms … don’t start racing until after ‘the stairs’.

146 people started the race according to the results page with 138 finishers (not guessing some didn’t start and some decided to have a picnic up on the hills).  I positioned myself at the start about 2/3 the way back of the group.  I hoped that’s where I would finish and figured should avoid holding people up nor having to pass too many which is what I do for every race.

The Trail To Cardiac Hill

Out of the gate the trail just starts climbing.  Not a crazy climb but enough slope and distance to put me into heavy breathing right away.  I quickly settled into a small pack of people.  The group I was in had a few huffing and puffing like me and few people keeping the same pace just chatting away (me hates them).

Then came ‘cardiac hill’ around 2km in.  With a name like that I almost liked being warned.  Knowing it was coming and knowing it’s the biggest climb of the day, I resigned myself to marching it vs. running as much as I could and burning my legs and lungs out thinking ‘I can run this, it’s almost over, it can’t be that much longer … this can’t be right … who chose this trail … kill me.’

After the hill there were more mild climbs and single track leading to ‘lookout point’ at 3km.  It was a beautiful view.  At the very top I hopped up on a rock and took about 5 seconds to enjoy the view, with 11km+ of running and 2 more climbs I knew a happy vision could be useful later.  I am glad I stopped. 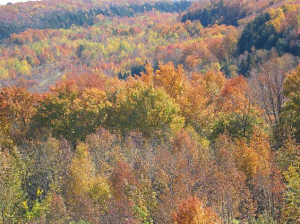 The ’64 steps to ruin’ section was next.  I could sense when we were back on the lower ground and knew the climb would be coming around 5k or so.  With the name came a warning and mindset to climb close to 5 floors of stairs.  I had been running for over half an hour at this point.  What they don’t tell you is that there is a steep hill … 64 steps over a super steep section of that hill … then more of that steep hill.  It was leg burning and terrible.  The anguish actually seemed to be over pretty quickly but I may have slipped into an oxygen deprived trance.

The Roots of all Evil

The ‘roots of all evil’ section is at the base of the final climb around 8km.  I knew the climb itself wasn’t as intense as the first 2 but it was on the only part of the course that had 2 way traffic actively using the trail.  There were ample volunteers there hollering at people both ways to ‘stay to the right’.  However when climbing a brutal section of ‘evil’ foot tripping roots it’s disheartening in a way to see the faster bunch of the race flying/skidding/sliding down the trail you are laboring up.

Around 9km/9.5km the trail turned downhill.  The way home from here, though still long at 5km, was mostly downhill.  We were strung out in singles for the most part.  This is when I punched it.  The trail was wide and easy to see.

I set my sights one by one on the people ahead of me.  Some of these people had passed me earlier and few had lost some pace I suppose.  I just punched it running like a wild man.  I tried to put a sustained effort and keep the pushing going.

Coming into the race I loosely picked 2 hours as a goal.   I based that on training runs in trail.  A time check at this point put me well ahead of that.

Coming into the final KM I knew at this point there is no point in losing your courage.  I slammed it at the edge of redlining constantly recalculating my reserves and the distance/time left.

In the last stretch of gravel before the end I came across what seemed to be a tour bus of people with cameras from the city.  They were in street shoes, jeans and too much clothing for being in the race.  I said hello while I was skidding by trying not to kick up too many rocks or too much dust.  Not one of them took a picture of me … but here is what they missed: 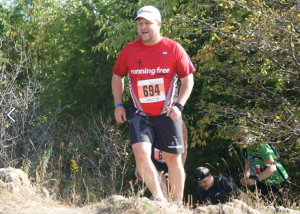 The final turn is a sharp one.  A volunteer warned me and other people cheered me in.  In ‘big event like style’ they called my bib number, name and city as I turned for the short skip across the line.  I still want to know who was spotting for them as you couldn’t be seen from the finish line … anyhow, it was a great touch.

I finished in 1:42:58.  I am really happy with my run.  It’s funny how a great day at a great event and great run makes all of the aches and pains the next couple days feel better. 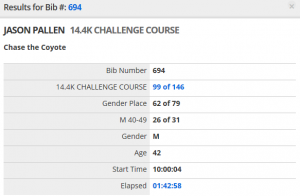 I highly recommend this race and I hope to see you all on the roads and trails some time soon!