I lived in fear and excitement during most of March. Every day that went by brought me that much closer to the longest run of my life – the Around the Bay 30km, also known as the “oldest road race in North America”. I had many half marathons and had followed a reasonable training program, but I was still feeling overwhelmed by the distance – but I also couldn’t wait to see if I would be able to conquer it.

On the morning of the race, I drove up to Hamilton with a group of girlfriends. It was the first time running the race for most of us. When we got there, the arena was packed with all the runners coming and going, and you could feel the excitement in the air.  The access to indoor toilets before and after was much appreciated! Soon, it was time to head to the start line. Now the excitement really began!

Though the 9:30am start time felt a little weird to me, I quickly settled into a steady pace. My girlfriends and I all started out together but as after about 20km we gave each other some encouragement and a quick, “see you at the finish” and then we split off. I enjoyed different parts of the route, like running on overpasses and on-ramps, passing some amazing houses, high-fiving the Grim Reapers, and running right along the water. The famous “hill” that everyone had warned me about had been omitted due to construction this year – it was, however, replaced with a series of rolling hills between kilometers 20 to 25 of the race. Each hill took a little bit of wind out of my sails and I was forced to walk a few times to catch my breath. The silver lining (and the personal mantra that I repeated to myself) is that “what goes up must come down”. My body certainly appreciated the downhill stretches that followed each mound!

It was fantastic to see local residents come out to cheer friends, family members, and random strangers. I wanted to say a special thank you to the families who handed out water bottles, fruit, and Kleenex! There were also a lot of children on the sidelines, cheering and holding up adorable signs. I also wanted to say that the volunteers were amazing, and everything felt very well organized. I also appreciated that there were lots of photographers around to take pre, during and post-race pics, and that there were plenty of water stations along the route.

Coming into the arena at the end was such a neat experience. At first, when the stadium came into view, I couldn’t actually see where the runners entered the home stretch. I had to squint for a moment, and then noticed that runners ahead of me were turning down a short, steep ramp into the stadium. This was a little scary! But seconds later, I heard my name being called out, which gave me that last push that I needed to cross the finish line. Some amazing volunteers shuttled runners into the “end zone”, where we grabbed food and got warm after just over 3 hours in the cold.

If I had to pick a few areas for improvement, I’d say that the corrals were a little crowded, and it would have been nice to have been offered some fuel during the race. I thought that there may be some energy gels or blocks handed out en route, but I had packed a couple of my own GU’s just in case so I was fine.

Around the Bay was a big personal challenge that I think I crushed. I’m happy that I ran it, and I’m still feeling accomplished as a runner. Will I run it again? It’s looking very likely! For now, I’m excited to enjoy spring & summer racing and holding on to the great feelings I had during ATB this year! 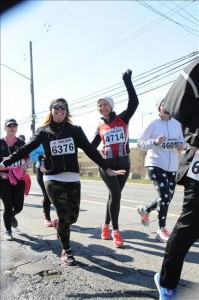