I was in the market for a four-bike carrier, to replace my two bike carrier, for vacation purposes. I quickly realized there are a lot of specialized carriers out there, with a lot of claims and some shocking prices.

If you’re in the market for a carrier, you’ll want to decide if you’re looking for a roof carrier, a trunk mount or a hitch mount. I have two SUVs and an RV, all with hitches, so it is the latter for me. Within this hitch mount category, there is arm-support carrier and a tray-style carrier, hanging the bicycles and supporting the wheels from below respectively.

My incumbent two-bike carrier is an arm-support hitch carrier. In addition the upside of a reasonable price point, I found this had two limitations – the arm clamp was made for thin road bikes and was a bit small for mountain bikes. Secondly, the clamp hangs the bike using the top-bar of the frame, which has rear-brake lines running directly underneath.

I was surprised to find the CPE 100189 for $219 CAD. It seemingly had all or more than all of the features of the carriers at towing accessory stores that cost three times as much.

I purchased this humdinger and assembled. The assembly instructions are better than most – but who out there immediately knows the difference between a Screw M12 x 95 and a Screw M12 x 70 when jammed in complicated instructions that are barely visible in one’s dark garage? And you will be in your garage, while a reasonable size for its function, this is a big unit to assemble: 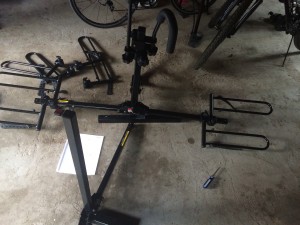 But once put together, this was quickly attached to a vehicle, here is the two bike formation on Gertie the RV with two mountain bikes that were hard to manage with the arm carrier: 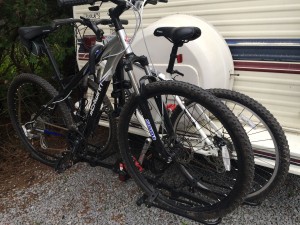 The four bike configuration would have two additional bikes parallel to the two pictured but further from the vehicle.

There were lots of features and benefits standard:

I give this a thumbs-up. The maiden voyage was hours each way on a 22-year old RV in inclement weather and the bikes did not move an inch. Everything wobbled on that RV when driving in a huge wind but the bikes were never a concern. Check this one out with confidence.