Talk about a cool experience!

You get to actually RUN on a RUNWAY!!! 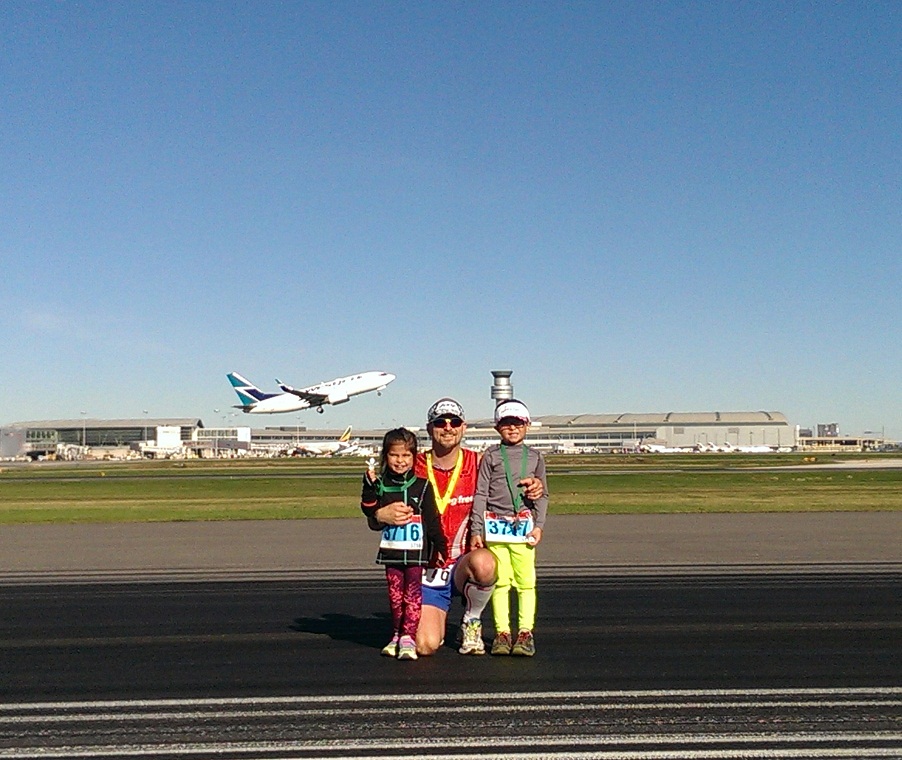 Background: I picked this this race thinking “This sounds really cool.  And hey, they have a 2km walk/run distance so my kiddo’s can do it.”

Having under-trained this year, I took a different perspective on this race.  Just go out and enjoy it.  And boy did I enjoy it.  I felt like a kid in a candy shop.  (Good thing I had kids with me, so it didn’t look too immature.)

How the day played out:

Having received the standard notification email a few days before the race, it was suggested that, if needing to pick-up race kits, you arrive at 7:30am.  Although the race started at 9:00am, we aimed for this early hour (actually arriving at about 7:45) and I am glad we did.  Commuting across the 401 wasn’t a problem, getting parking wasn’t a problem.  The not-so-long line up for race kits weren’t a problem.  So for us, it was a pretty casual morning.  Which, considering it involved getting my wife, my 6 y/o son and 4 y/o daughter rallied, was a feat in itself.

The gathering area was inside the Pearson Airport Maintance Facility.  They had a large screen showing a video, a host with a microphone giving directions and leading an energetic warm-up/dance party.  And yes, enough porta-potties to handle the crowd.

As parking was close, so I was able to run the kits and extra gear back to the car before being marshaled out to the airfield.

The stuff they had on display is what made this memorable:

A FedEx cargo plan that you could go up into

A pair of peregrine falcons were also on display (who knew they were used to deter other animals from squatting on the runways?!?)

5km participants were marshaled to the starting line in one big group.  No obvious effort was made to separate runners into estimated finish times.  Having met a few friends at the race, we ended up chatting and falling into the middle of the group.  Yes… there were walkers a head of us.    (Interpret this to mean: Not gonna be a PB).

The starting horn went off, and the trudge to the start line began.  As people crossed the line, it was clear that this was a charity event.  Half the participants were walkers, or slow joggers.  I headed out, with a buddy beside me at a casual pace and made the very critical decision: ENJOY IT!

You head out about a half kilometer, then do a U-turn.  After the U-turn, the course opens up wide enough that you are better able to navigate the number of people.  I decided to pick up the pace a touch and cruise.

Running down the middle of a runway, seeing 6 or 7 fully loaded planes lined up on a parallel runway taxiing to take off a hundred meters away is something I won’t forget.  Seeing all the sprawled buildings used for cargo shipping, the passenger terminals, the maintenance vehicles, the control towers… yes, it was an experience in itself.

Race time did not matter.

At the other end of the straight run about the 3km mark, (which, if you weren’t enjoying the experience could have been drastically boring), was a table where full bottles of water were being given out.  Seemed a bit much, but participants appeared to appreciate them.

Looking ahead I noticed a son and father talking.  The father appeared to be on his way back, while the son, looking disappointed, still had to get to the turnaround point.  I stopped, let the boy know he was just about at the turn around and encouraged him to reach it.  Off the son went to the turnaround, off the father went towards the finish line.  With a great smile from father to father, onward we went.

The 2km walkers (runners) were marshaled to the start line and released after the 5km race started.  Coming to the point where the 2km turns around, I started looking for my wife and kids on both sides of the race.  I spotted my son’s bright yellow long johns ahead of me, so they had already passed the turnaround.  I picked up the pace and caught up to them, getting a delightful squeal from my daughter in surprise.

Together running hand-in-hand we finished the last kilometer and crossed the finish line together. 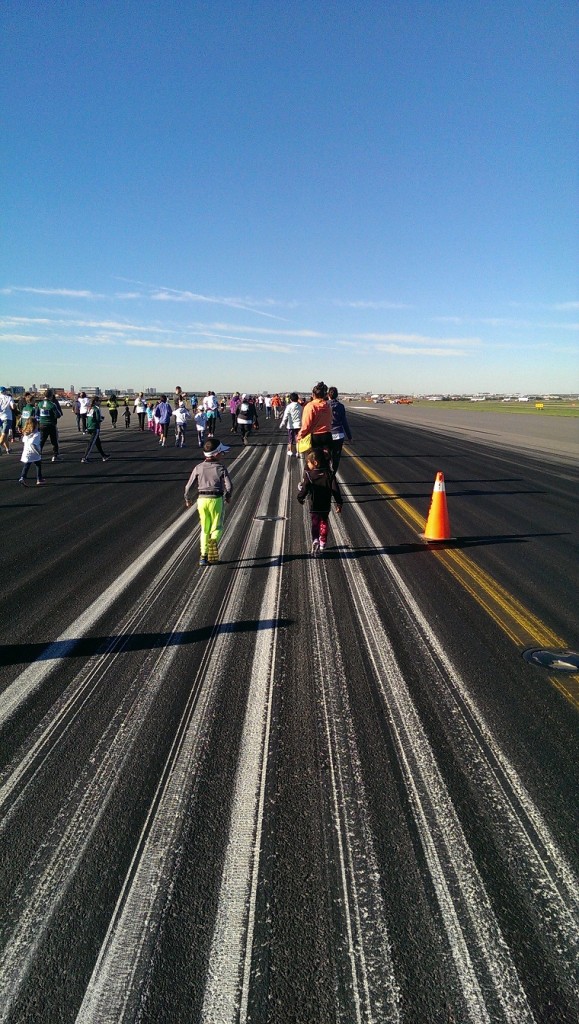